Contest Day! - Win an Ad for a Month 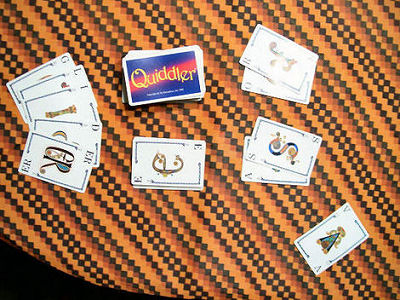 Two years ago my hiking friend Marie and I discovered a game called Quiddler. It’s a word game, and we really love it. I mean, we REALLY LOVE IT. So we’ve learned all kinds of new words trying to beat each other. We got to play a little bit this year before and after the hike. She even chose to play more Quiddler instead of me making homemade rhubarb pie for us! (Not that I minded... not many people will play with me.)

So this month’s quiz uses words that we’ve added to our Quiddler lists. I’ve made it mostly multiple choice so you can guess for fun if you don’t want to research. The first person to put the most correct answers in a comment before midnight EST Wednesday, June 3 will get a free ad for one month.

3. Which one has nothing to do with books?
a. quern
b. quire
c. quarto
d. quadrat

4. List any four words of four or more letters where Y is the only vowel.

5.Which one is not a word that describes a geologic feature?
a. vly
b. vug
c. col
d. zax

What fun! I hope you've enjoyed a wonderful hike! :)

I decided not to be lazy this time. I have a lot more words for number four, but I thought it would be better to give others a chance to find some originals.

Three entries so far! Keep it up... still two more days to enter. Even if you think someone already has all the right answers there might be a reward for chiming in...

I did get to read this early enough to enter but had to say the Loretta brought Quiddler to the hospital and we okayed many games. I, too, find it hard to find people who will play with me so I hope you and I can do so someday. I love playing the solitaire version but because I am lazy wish I could play it on my laptop.