It was too early for many flowers to be out yet, but several were opening during the final week of our hike. I'm sharing these two because they are ones I had not seen before. 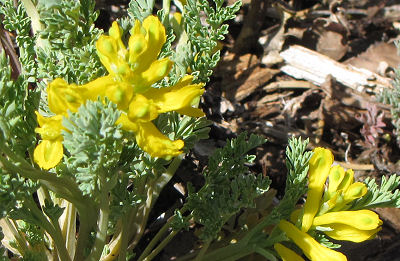 Above is Yellow Corydalis (Corydalis flavula). It is related to bleeding heart. I've seen Pink Corydalis on several hikes, but hadn't previously seen the yellow ones except in pictures. The pink ones are more delicate- almost so pale that they often are hard to see against the granite on which they like to grow. The yellow ones seem much more showy even though the plant is only a few inches high and each bloom about 1/2 inch long. We found them growing at the base of some rocks in the area that had been logged (see yesterday's post). 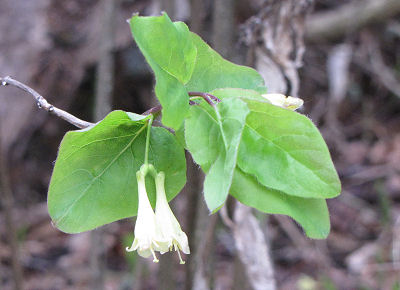 The second one is American Fly Honeysuckle (Lonicera canadensis). This is one of the native honeysuckles, much more welcome than the alien Tartarian Honeysuckle bushes that grow everywhere in Michigan. The flowers were very pale yellow, maybe that's not quite so obvious in the picture. Each trumpet is about one inch long, but the bushes were several feet tall. Somehow I had thought that the Fly Honeysuckle had a sweet scent, but they didn't smell like anything at all. Honeysuckle is easy to identify, at least in general because it is one of the few shrubs with opposite branching. Also the flowers and berries are in pairs, often looking like two berries stuck together.

Wow, tomorrow is the last day of May. It needs to be contest day! I'll try to make one that isn't so daunting. Hope some of you will play!

Thanks for sharing your adventure

It's great to take time with Nature and to appreciate God's lovely treasures and flowers are certainly one of them. Thanks for sharing your lovely escapades.

Glynis- I was really quite surprised that the honeysuckle didn't really smell like anything much at all.

Sen and Qi- Welcome! Thanks for stopping by.

I love honeysuckle. I recognized it immediately. We used to have honeysuckle bushes in our yard when I was a kid. My mom taught us all what they were.

Hi Ratty! Did you have the native honeysuckle? That would be really cool! The fly honeysuckle berries are supposedly edible like blueberries, but I've never tried them because I don't know anywhere near me where it grows.

I don't know what kind they were, but I think I remember that they sure did smell good. It was a very long time ago.