I Think Winter Has Arrived!

You may recall that my snowshoes were being touched up on the kitchen floor just yesterday. But today they were put back into service. Horray!

Actually, the day began once again, with snowblowing the driveway. It was really difficult as the snow was wet and heavy. I had to do most of the bottom by hand, and spent an hour and a half working on it all. And that was before breakfast! But a couple of those cranberry-pumpkin muffins and a pot of coffee fixed me right up, and there were no naps taken today.

By mid afternoon, I just had to go outside, despite the wind and falling temperatures. My pulled muscle is much better, but I wasn't sure how much snowshoeing I could do. Sure enough, in the deep, unbroken snow, it was complaining. I had hoped to go around my shortest loop twice, but we only made it once. Maggie really wanted to go out, but she was happy enough to come back inside, too. 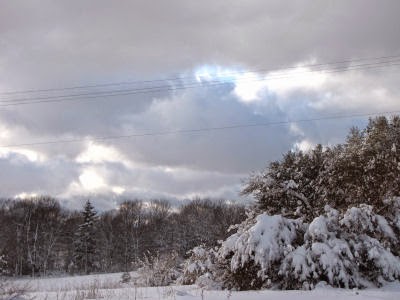 The sky was really interesting with dark clouds and the beginning of pink tones, even at 4 pm! The pink could be seen in every direction except to the south. 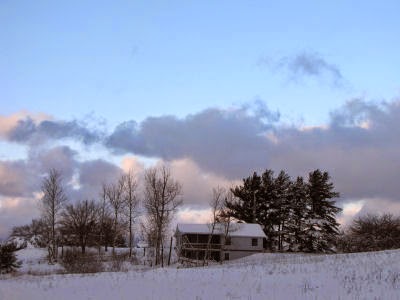 Here's the back side of our house. Don't all come hunting me down now! I think tomorrow is going to be really similar to today. Maybe the wind won't fill today's tracks and I'll be able to walk farther.

Wow! You got a lot of snow. We didn't get very much snow on this side of the state, just enough to see that it did snow. The wind helped by blowing it all away. That wind is stopping me from my walks in the forest. As soon as it stops I'll be able to go see what damage it caused.

No snow as yet in England and thankfully no rain today.

I remember my Grandma's words from my childhood when we could not wait to get the sleds out, "one day you will only be glad to see it on Christmas Cards" :)

Oh I love snow shoeing, Got a pair last Christmas season. Looking forward to using them again.We did not receive as much snow. but I will find that snow somewhere in the mountains.

I read about the snow storms in newspaper.

You are seeing, and I am reading snow now.

Lots of snow down here too. Our house is a bit higher than surrounding ground, so we get a lot of blown snow. Some patches clear and other drifted. The tractor is ready, serviced and front-end loader and scraper blade are mounted. Now to brave the cold . . .

That's a lot of snow you get already! Not much for us down here yet..

look at the snow..i wanna be thr

Beautiful pictures. If it wasn't for the fact that winter was so darn cold it wouldn't be such a bad season :) We've had snow ALL day here, I think we got about a foot but at least it's the light and fluffy stuff.

Wow! What a winter wonderland you have there!! You are so lucky to be able to go snow shoeing in it. It's the bitter cold and wind that is hard to take. Stay warm and safe!

As much as I would love to visit, it will have to wait until I win the lottery and I can be helicoptered in and dropped down at your door!!! What an abundance of snow you have so it is a good thing your snowshoes are now ready for the rest of the winter!!

Oh my! I just discovered that I didn't respond to these comments. Sorry folks!

Ratty- I'll bet you were out on your trails this weekend.

Duxbury- I think you haven't reached the age your Grandma predicted. I'm expecting to continue to read about rambles!

Auntie E- it's great exercise. Use 'em when you can.

Chuck- a tractor! You are plowin' in style.

Icy- Yeah, we got about a foot. Just south of us got even more.

SJ- sure, come play, it's just a little commute.

Ann- ours was wet, and now it's melting more.

Ginny- yes, it got very cold for one night, but now it's above freezing and melting. :-(