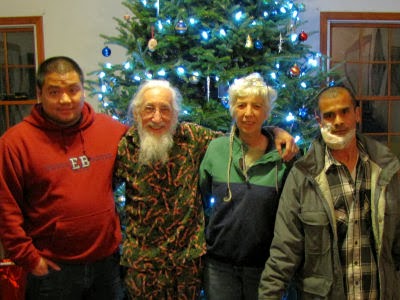 I sort of promised a picture of Steve, and so I'll share our annual family photo. He's on the left, and as you can see, there is now plenty of him to love.

You may also notice that Josh is wearing an interesting facial decoration. An abscess he's had on his face for a while suddenly got much larger, so we spent the afternoon of the 24th at the emergency room where he had it drained and packed with antibiotic. After taking Steve to the airport today (a long, long drive in very poor visibility), I took Josh in to have his face checked. I think that he is going to end up with a nasty scar.

Also today, since we hadn't had enough excitement, there was a big "whump," and the Christmas tree fell over! Only one of our favorite ornaments broke, mostly lost just plain ones. Poor Om! Now he has to decide if he wants to decorate again. We set it back up, but most of the ornaments are just in a box now, and the lights are rearranged in a novel fashion.

The Quality in today? Well, we did get to the airport on time, and I got home safely. I think that Josh may have gotten the message that he has to get his teeth taken care of (which is causing the abscess).

And it was great to have Steve home. He didn't make it last year because he had a new boss who was looking for any little reason to lay people off (like asking for time off). So we just tried to enjoy our time together for the three days we had this year!

Time to get back outdoors tomorrow. We are supposed to get major snow tonight, which will be great to cover the ice from the freezing rain we've had for the last two days!

Once Christmas and New Year is over, I am going to put up my red lanterns, Chinese New Year will be here soon, on 14th of Feb.

Shark, I love all the family pictures! It's nice that everyone was together for Christmas. Sorry about the tree...but, at least, it was up for the big day and that's what counts! Thankfully, none of your treasured ornaments was broken.

I was just looking at your blog and I forgot that I had an ad already and I purchased another...oh, well, maybe that will intrigue visitors and they will check my blog.

By the way - ilium only has, five letters - the wikipedia definition is: The ilium is the uppermost and largest bone of the pelvis. As a nurse, I'm quit familiar with it - also, they used a piece of my right iliac crest as a bone graft when I had my spinal fusion 25 years ago.

I stayed up till 3AM the other night, working on that puzzle. I finally gave up. I'd never done that type of puzzle before. I learned so much that I didn't know before but some of the things I just couldn't figure out!

Love the picture. How wonderful that you could all be together this year. Not a very nice Christmas eve for Josh though, hope he's feeling better soon.

Everything will be better in the New Year, I'm sure.

I hope next Christmas is less eventful than this one!

It's great to have Steve back there. He such an adorable young man :)

lovely picture of your family Sharbytes. great to see always a family celebrating togetherness. sorry to hear about Josh's abscess, hope it gets better soon.

rainfield- we will be happy to celebrate your holidays with you!

Carmen- Yes, I noted your correction and gave that clue as ILLIUM (spelled wrong but it will work for this puzzle for now). Well, give it a rest and come back another day. Sometimes I have to do that. But, unfortunately, that tells me that it may be a difficult one, because I think you are good with words. Even if you don't get it all, be sure to submit what you have. Who knows?!

Ann- thank you. I gather you have your own crisis at the moment. Hang in there.

Dennis- who knows! Your escapades are pretty bizarre, yourself!

Vanilla- He was a truly adorable child. Maybe I'll share a pic sometime.

Betchai- Thank you! I've come to treasure these annual pictures. We seem to stay much the same, until I look at a series of these!

sorry to hear about the tree...the photos of it look great...hope Josh's abscess is getting better. Still aiming for Jan. 18 for a trip to Mich even though my boss says my "seasonal job" ends Jan 24th...Hope you can wait that long for your present!

I like Om's snappy holiday outfit!! :) Glad you had a good one, Sharky!!

Steve looks to be about the same size as me. I'm happy you were able to have your whole family with you.

Loretta! Where've you been, gal? Looking forward to seeing you. The presents are only a very small part of what we enjoy about seeing you. And the snowman towel you already sent is really cute.

Lin- the man is just nuts about it! It is heavy flannel and he wishes he could wear it everywhere. Says he's finally warm.

Ratty- It's always just a big shock to me to see Steve so hefty. He was skinny as a kid, and very slim and fit as an athlete in HS. It amazes me that he has become a couch potato, which I know you are not.