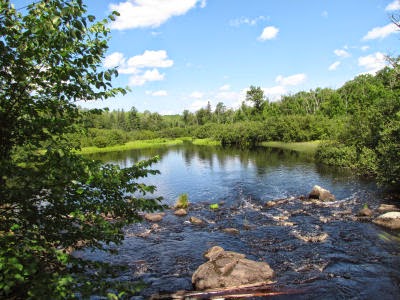 One of the hikes during the conference was on the NCT in the Chequamgon (say shuh-WAH-muh-gon) National Forest at the Brunschweiller River. One of the leaders was the botany guy from the NFS. He said that there was a threatened fern along the way if you knew where to look. And, of course, he did. So I asked to see it! Here you go. 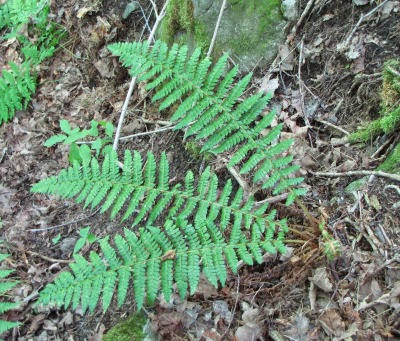 This is the Braun's Holly Fern, Polystichum braunii. I'd never seen it before. But if you notice the pinnae, they are rather distinctively shaped. I think I will recognize this if I ever see it again. 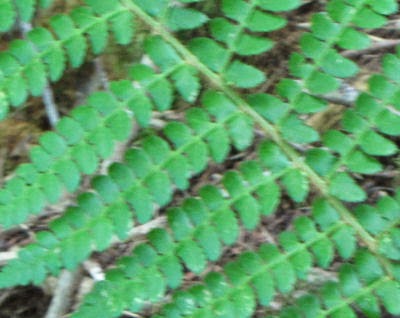 The stipe (lower stalk) is hairy and thick. 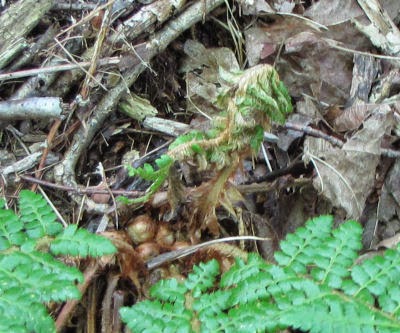 I like how the fiddleheads uncurl... still new ones even though some fronds are fully unfurled.

It's a very pretty fern. I've always liked the looks of them, no matter what type they are

I think I have seen these here in the U.P. !

I am a fan of ferns.This one is very pretty. Hope somehow it becomes plentiful once again.

That first picture is wonderful. I'm still trying to learn to identify ferns better. I found some plants that appear to be ferns, but I'm not sure. One of these times I think identifying plants will begin to come together in my head.

i am not good in identifying ferns, your first picture is lovely.

I can't tell one from the other but this looks like the ferns that are growing all over my backyard.

Ann- Yup, I know that telling one fern from another is not high on the to do list of very many people. But, I agree, they are so pretty!

Hi to the other Joan! Yup... it's found throughout the UP. See http://www.fs.fed.us/r9/wildlife/tes/ca-overview/docs/plant_Polystichum_braunii-Brauns_Holly_Fern.pdf , page 9. I've just never seen it that I know of.

Jean- I think it's status is due to the fact that its circumboreal.

Ratty- I'd been there before, of course, since it's along the NCT. But I think I'm going to find that I really like going back to many of these places again.

betchai- hey, me neither! I'm trying to learn them.

Jen- where do you live? It would have to be in the northeast high north US states or the Pacific Coast of Canada or Alaska.

I love ferns. Living in Florida, nearly forty years ago, in the first home I ever owned, a brand new place, we had a wonderful entrance, where I planted ten different varieties of ferns.

Carmen- that is great! 10 kinds of ferns in one location is amazing, even in a garden.

They grew so well in that entrance to the Florida house - shady, on each side of the walkway, quite humid, of course, and I had both hanging baskets of several varieties and other ferns planted in the ground. Everything grew like crazy there. Things that are houseplants here grew into trees there!