Swimming with Duke / Dreaming with Frida 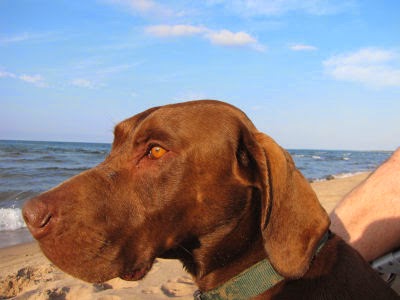 Meet Duke. He is one of the most unusual dogs I've ever known. I'll tell you about his people in a minute. One of the really important things about his people, to Duke, is the fact that they live on Lake Superior.

We've all known dogs that love the water; that alone would not make Duke unique. Have you known a dog that would completely entertain himself as long as he had a beach? Duke first runs up and down the sand for at least a tenth of a mile in each direction. Then he heads out into the water for a long solo swim. I mean a LONG solo swim. He heads straight out for Canada until he is almost out of sight. Then he turns and swims parallel to the shore till he's well beyond his own beach, when he will finally head back into land.

I swam out pretty far myself, and I wasn't even half as far as Duke. One of the three times we went out together he swam over to me and we touched noses. I think that was a real honor! He's a four-year-old chocolate lab and Vizsla mix. Did he know that Maggie was his "cousin?" 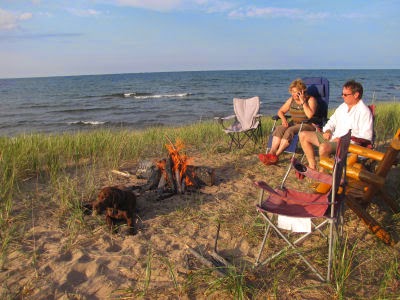 Here are Duke's people, Ron Thorley and Frida Waara. I got to spend the last day and a half with them. They are a remarkable, generous couple. Their son, Ian, is a professional snowboarder, and their daughter, Erika, leads expeditions to summit Mt. Rainier. 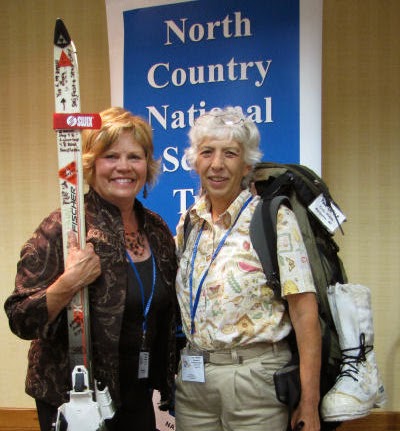 I've known Frida for a couple of years. She is an outdoor writer and videographer. She's also a polar adventurer, part of the WomanQuest team that went to the North Pole in 2001. She's headed to the South Pole in November! She was the keynote speaker at the NCTA Conference, so we got to renew our budding friendship.


She set about getting publicity for my trail finish, and I did do an interview with TV 6 Marquette. Amazingly, she got me into the September issue of Silent Sports magazine. That is really remarkable.

Perhaps most importantly, and I'm going to tell you more about this tomorrow, she is helping me with this redefinition of what I'm going to be... how I'm going to earn enough to support my addiction to being outside.

I love watching dogs like Duke swim. They seem to love it so much, and he especially sounds like he does. I'm not a good swimmer though, so it always made me nervous when my dog would go out too far. And anyone going to the North Pole is very impressive. Some of your friends seem to be of the same caliber as you.

Super visit you had with your interesting friends and Duke who appears to be a wonderful dog.

Another Duke with a passion for the water :) Sounds like this Duke has quite the routine work out.
Your friend also sounds like quite a remarkable woman. Best of luck in your venture and can't wait to hear more about it

You have such fascinating friends (including Duke), Sharkbytes. Thank you for letting us meet them. :)

What a small world! I know Frida! And of course when people hear my name (which is Haara) they call me Waara. ha We live close to Marquette in Michigamme on the lake....and we invited her to speak at our Ishpeming Rotary Club when I was President too. She is a delightful person.

It was so awesome to become Duke's friend! Well, Ratty, perhaps I'm attracted to people who like to take on big adventures, but I hope I'll always be just me... no pretense.

Jean- It was such a privilege to spend time with the people and the pup too!

Ann- Of course I should have thought of your water-loving Duke too!

Joan- Oh my! I drove right by "you" this past week on my way to Ashland, WI, which is where the conference was. She is delightful, but I know that you are too. Just made friends with a young couple from Ishpeming, Paul and Shawn Olson.

Oh, that Duke is a beauty! I hope he is careful and doesn't swim out too far. He has to be careful of riptides.

Duke is such a beautiful dog and I read with interest about your friend, Frida and WomanQuest. You all are such amazing women, such opposites of me but I'm glad that doesn't mean we are not friends. I have such respect for your outdoor skills and love of the outdoors!

Lin- there aren't usually currents right on their beach. Near the rocks north of town is another story. I think they would have to keep him leashed there. Two more people drowned just last week. It's scary.

Carmen- well, I really respect your work in forensics for so many years. I would love to hear more about that. Can you do some consulting to make some $?

Well, Joan, when my job first ended, I sent my CV out to about 200 attorneys in hopes of doing some consulting work but it didn't pan out. Most already had hooked up with nurses early on in our beginnings and didn't need anyone at this time.