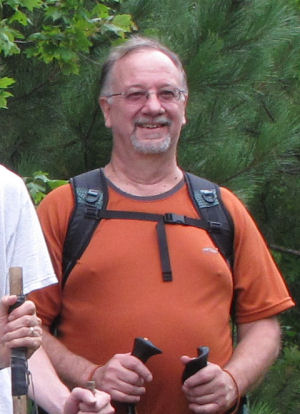 I kind of got sidetracked from introducing fellow hikers to you. Tonight you get to meet Lyle Bialk. The way I got to know Lyle is kind of a story in itself.

I had signed up for a Volunteer Vacation with American Hiking Society in 2003. This was my first serious effort to find out just how challenging it was going to be to hike the Minnesota Arrowhead. The trip goal was to work on the Kekekabic Trail portion for 5 days. Since it's a long drive, I took a look at the sign-up list to see if anyone else from Michigan was going, and found Lyle's name. We talked on the phone, discovered that we had actually met once, and agreed to ride together in his jeep, sharing expenses. I thought, "How bad could it be?" The worst I could imagine from a fellow trail enthusiast might be that he would turn out to either be a braggart or a bore, and I figured I could tolerate either of those to save a few bucks.

Well, Lyle was neither of those bad "B" words, and he's become a really good friend. Because I got to know him on that "vacation," we stayed in touch. He got more involved with the North Country Trail, and is now on the Board of Directors.

In the spring of 2009, many of you were following this blog, and you may recognize that Lyle was one of the group who did hike the Minnesota Arrowhead with me. Believe me, I did not invite anyone about whom I had any misgivings concerning their skills or personality on that trek.

Lyle just barely snuck into North Country Cache in the third from last chapter. Of course he'll be in the sequel, North Country Quest.

"We begin [Thursday] by putting six people in two canoes and paddling to the top of Lake Gabimichigami again. Four of us, Claire, Paul, Lyle, and I stay there and start working westward. Bob and Julia return to the campsite, and then, with Derrick, begin a long paddle across this lake and the entire length of Agamok Lake, towing the two empty canoes. Once there, they will work east, toward us, until we meet somewhere in the middle.

I've hardly seen Lyle since the trip began, and he and I now seem to naturally separate into a sub-group, comparing notes of our experiences. The day is cooler, the trail is hillier, and thus more interesting without being particularly difficult."

In real life, Lyle is an EMT. He's a soft-spoken guy who won't impose his agenda on you, but if asked to step up to a task he performs it with confidence. I'd feel quite safe having him be the responder if I were in an accident.

It's good to know that Lyle is part of the group. It sounds like he is a reliable and capable person to have around, especially should there be any need for an EMT!!!

It is good to have a hiking partner, especially for a long journey.

Always a pleasure to meet your fellow hikers. It sounds like you made a great friend in Lyle

It's amazing how many interesting people that can be met because of nature and hiking, which would mostly be perceived as a solitary activity. I think I meet more people in the forest than I do in a crowded city.

it's nice to meet good natured people through your hikes, you are lucky to have met a lot in your journey.

Carmen- I like some risk, but I try to prepare well enough that I don't have "accidents."

rainfield- sure is! And every person you add to a group adds a layer of interest.

Ann- yes, he really has become more than just a fellow hiker.

betchai- yes, I am very fortunate, blessed even. Many, many people have helped me along my way.

I have to say I have met some of the most interesting people on hikes and rambles.