A Tale of Eight Walnuts 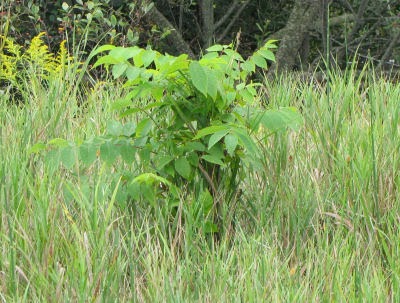 Once upon a time [in 1996], a dreamer [uninformed gardener] traded in some magic beans [hard-earned dollars] for eight baby walnut trees. The babies had been raised in a loving nursery [shady tree farm- pun intended], and announced to the world as healthy infants [advertised as fast-growing foot-high trees]. 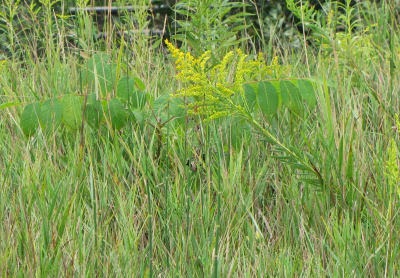 The dreamer [increasingly skeptical gardener] received her bundles of joy [plastic bag of dead-looking twigs] by special birth delivery [US mail], and promptly set about creating an environment that would please the babies [dug a row of holes along the railroad tracks and put them in]. 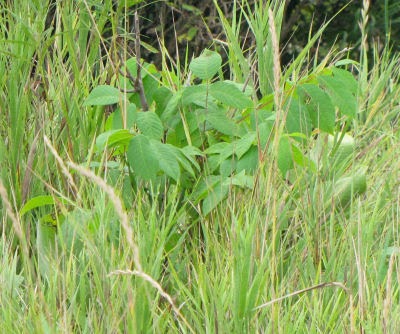 Then she waited. The little trees burst forth with [got a few] leaves. The first winter, the little trees thoughtfully helped the wildlife flourish [were eaten by the deer- aren't walnut trees supposed to taste bad?]. Come spring, the babies developed a shy streak [were now only 3 inches tall and completely hidden in the grass.] The dreamer [disillusioned shopper] became involved in other pursuits and left the youngsters to learn and grow [figured they were dead and forgot about them]. 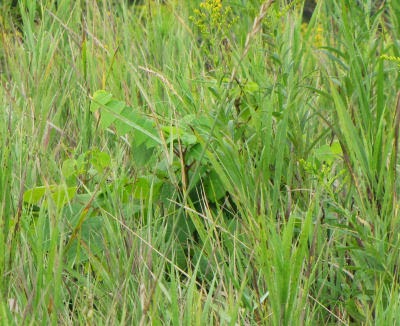 Skipping ahead [let's condense this a bit], after a time of seasons [maybe in 2005] our heroine [ok, it's me] went hunting for the eight little trees. Lo! Here was a mystery [this was freaky]! Six of them had miraculously survived, but two had tired of living by the tracks and had moved closer to the path [what the heck? trees don't walk, do they?]. 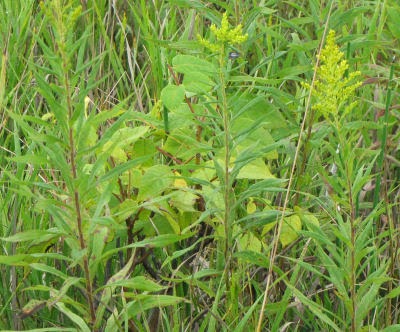 Then she remembered! After first tucking the babies into their bassinets [sticking 'em in their holes], she had sprinkled the leftover fairy dust [dirt] around their new home [in the general area rather than dragging home a plastic bag full of grunge]. Despite the continued thoughtfulness of the trees toward the wildlife [being trimmed by the deer every single doggoned winter], after yet more moons and suns [last year], the little trees began to fulfill their destiny [you could see them above the grass]. 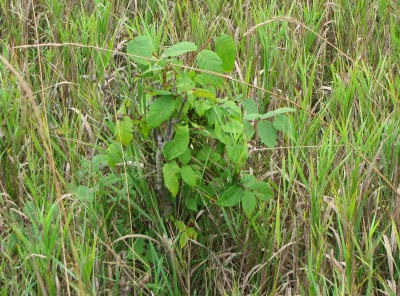 But, alas, the little trees, although sturdy [4 survivors of the original twigs and two sprouts from roots that weren't even planted], have never lived up to the promise of being fast-growing [they're about 15 inches tall in full leaf]. But life is good [what the heck, I changed my mind]. The dreamer now likes to watch the chuffing blue monsters [trains], so all is well. The little trees are content [these six seem to be hangin' in there], and have chosen not to block the view [aren't in danger of hiding any trains in my lifetime].

I am chuckling to my self as I can almost say word for word I know some who did the very same thing only from acorns the saplings were duly planted and at the last sighting 5 years ago they were 2 foot tall, they were by then 12 years old, I must go back and see if they have survived (yes it was me).Next we did conkers (Horse Chestnuts) the said nuts have not made any sort of sign that is visible but we live in hopes :)

Thank you for the wonderful Tale of Eight Walnuts. This story as comforted me as taught a lot, helped me to stay content with what I have (taught me to appreciate more my being alive)
Butterfly in the Plaster sends best wishes to you

So well written, thank you for sharing.

Ha Ha, that was a lovely fairy tale. Thanks for making me smile.

I've been trying to decide which is more enchanting . . . the story or the parentheticals. How silly. They are both part and parcel. Great story.

Nicely done! The squirrels persist in planting walnuts in our yard, but never where they are wanted.

What a funny story! I had a similar experience with planting little trees. All of my died.

I planted 6 black walnuts this spring because my wife was dreaming. All are alive but I think they would have done better if I planted them upside down. Even the deer have taken pity on them and left them alone.

I just love the way you told this story. I giggled the whole way through. I never had any luck planting anything that I ordered through the mail. I don't have much of a green thumb though.

What a charming story! I love the way you told it. I haven't tried planting actual trees and I can only imagine what it's like to deal with the element of winter. :)

Maybe a good view of the trains was just meant to be. The trees are just cooperating with destiny.

Carol- there is quite a bit of faith involved in planting little trees, I think.

Tomas- I am amazed that you saw so much in my little bit of humor. Hadn't visited your site in a while. Nice stuff!

rainfield- you are the king of subtle humor. I'm more cynical

Chuck- yup... wouldn't work without both

vanilla- and those actually grow? Once in a while one will grow in a ditch around here, but wild trees from walnut nuts is rare

Jean- yes, the mortality rate of baby trees is tremendous

John- One has to be really a long-range planner to deal with walnuts, I think. That fast-growing label was about as far from the truth as one can get.

Ann- some companies are better than others. I learned that one always sells the smallest plants that it's legal to list.

Ivy- winter is grand, mostly! But tree have to have the right "attitude" to make it through.

Woes of the gardener with deer. Oh you are patient indeed! I figure that if "it" does not make it the first year I am done with them. But your little trees keep on trying.