This week will be remembered as another semi-mythical turning point in the historical battle of man vs. machine. Although John Henry, the strong man who beat the steam drill, won his contest, the hand laying of railroad track was soon to come to an end.

The humans who battled the machine this week failed in their attempt to overcome. They probably lost, not for lack of knowledge, but for lack of speed. Have you figured it out yet?

The IBM computing system, named Watson, went head to head with Ken Jennings and Brad Rutter this week on Jeopardy. 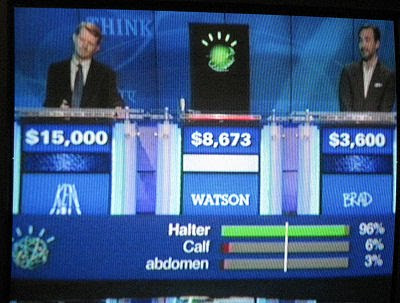 This computer is really a room full of servers- about as many as would fit in ten refrigerators. It was designed and programmed by a large group of people over the course of four years. So... man vs. computer has happened before, particularly in games like chess. What is different about this contest?

This computer uses a process more like true thought than the "brute force" method of determining the right answer. In brute force the computer simply calculates every possibility, and then chooses the one with the best outcome. Watson, however, operates in a completely different manner. If you watch Jeopardy you will know that every clue has at least two hints in it. First you have the category, then the clue itself. Very often the clue has two parts, or even a not-so-subtle hint in it (that is often a play on word meanings, if not an outright pun). The person who can correctly put all the clues together and fixate on the one question that fits all the parts of the answer, quickly, will get that question right.

Watson read each clue, took each word, assigned a weight to the meaning (like throwing out "the") and compared lists of related words until it got a match between lists. It then assigned a probability of the selection being right, by comparing it with the total clue. If the probability of being correct was above 50% then Watson would ring in. We could see Watson's three top choices for each clue and its probabilities (note bar graph at bottom of above picture). 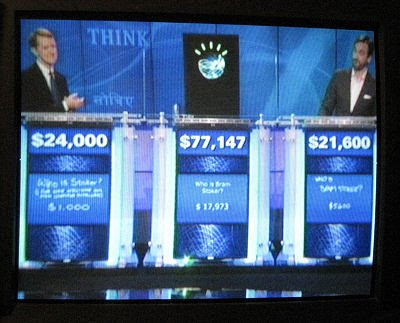 This picture is the final scores of the two-game contest. Watson trounced Brad (all-time highest earnings on Jeopardy) and Ken (longest run of winning games on Jeopardy). Everyone seems to agree that this was primarily because Watson's reaction time to ring in was 1/100 of a second, not because it was actually smarter than the humans.

But the truly historic part is that, like John Henry, Watson has been introduced in a manner that is not likely to be forgotten by everyday people. This is not just a gimmick. The computer is already being programmed to aid in medical diagnoses- not to take over a doctor's job, but as a way to look at more possibilities than one doctor can consider in a reasonable time frame.

Email ThisBlogThis!Share to TwitterShare to FacebookShare to Pinterest
Labels: philosophy

Out on the prairie said...

I took my first computer class in 1976 and played with flow charts and wondered what these creatures really could do in my life.Now 13 computers later I would be lost without my resources.

A computer increases our brain power.

We cannot live without them by now.

humans will never be as fast as computers but they gave it a heck of a try.

If I remember it right, there have been surgeries conducted by robots run by computers.

BTW, if you haven't read my reply the name of our son is Benedict Seth.

The Jeopardy contest was intriguing. I resisted the computer for a long time until my son more or less forced me to try it. Now I'm hooked. I do hate to see humans rejecting brain-power, however. I know a lot of schools no longer teach a lot of math because "computers can do it". And spelling is glossed over because of spell-check. I guess they have forgotten that, at least for now, someone has to program that information into computers. Anyway,time matches on.

my husband watches jeopardy all the time and was talking about this. He said he never did get to see who won since he fell asleep before the end. I'll have to tell him about this.

Hi prairie- thanks for jumping in. I've been computing 12 years longer than that, even. Who woulda' thunk?

rainfield- so true- we just count on computations that would take humans way to long to calculate by hand.

Linda- that they did!

sirrob- that is interesting. Thanks for reminding me of the boy's name. Now I have to ask what you call him for everyday.

Emma- well, I even learned how to calculate square roots by hand in jr. high, but no one would ever do that by hand any more, eh?

Ann- he fell asleep! he fell ASLEEP! He must be penalized! Tell Duke to poke him.

I'm not surprised by this. While my sympathies lean more towards the side of John Henry every time, some tools are just designed for some tasks better than humans. Trivia seems to me like something a computer would master better than any human. It's a remarkable event, but a time when a computer becomes a better human than a human will be the most surprising of all.

This brings to mind so many Sci Fi movies, like 2001 A Space Odyssey and the Terminator series, where computers got too smart for our own good. It's interesting and it's scary.

Ratty- yes, this was a game, and something that humans enjoy doing, plowing through mounds of serious trivia for a serious purpose is exactly the kind of thing computers are good at. Words are not as exact as numbers, and there's the rub for computers.

Ferd- it is both of those- interesting and scary.