A Hard Day in the Carhartts 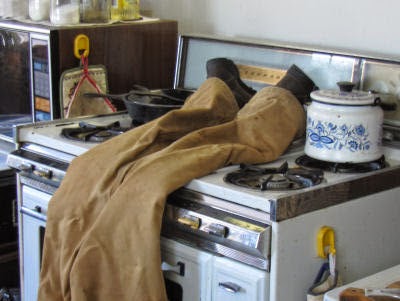 It was a long day. I think it was a record-breaking day. It was a day for warming one's legs on the stove (the griddle pilot light keeps the center warm). Do I look a little deflated? A little topsy turvy? All those things are possible.

For starters, the day began with yet another clearing of the driveway. In and out of the Carhartts for the first time.

Josh has had no water since Wednesday night (just by the way...). So after doing some morning computer work, it was back into the Carhartts to head over to his place to make sure the pump was now thawed out. (Do you care about this saga? A pipe broke under the trailer. We shut the water off at the pump. What we did not know was that the water had shorted the plug for the heat tape and tripped the circuit breaker for the outside power... so the pump froze, and when the plumbers came on Thursday they couldn't do anything till we thawed it out. So... I went over to check on that.) The pump was indeed thawed now. So I went back home and called the plumber, then walked the dog in the Carhartts, since I already had them on. I usually wear my snowpants for that activity.

Out of the suit again, I was eating lunch when the plumber called back. He was ready to meet me over at Josh's. So... back into the Carhartts (and the snow boots, of course). Back to Josh's. The plumber told me the pump was now thawed and that I could turn the water on by turning the valve. Duh. I said, "I know, that's why I called you. But if we turn it on the water is spraying all over in the bathroom wall." So then, he gave me the lovely news that his boss had decided they weren't going to fix it. (They used to do all plumbing, but have been focusing on just pumps in recent years, however they had agreed to come look at this problem). So... back home again, and call another plumber (and take the winter gear off yet again).

In perhaps a stunning alignment of the plumber planets, he said that he would come right away. (Have you ever heard a service person say that?) So, he said he would meet me there in 45 minutes. OK... I was getting a little nervous about time because I also had some work assignments for my new job to do this afternoon too. But Josh needs water, right? So... you guessed it... it was back into the Carhartts and boots again, and back over to Josh's.

The plumbers were there. One of them was the size of me, Omer, and Josh put together. The best news (well, other than the fact that these plumbers were willing to plumb) was that Josh was also there. At that point, I figured that one less body in and under a small trailer would be a good thing. Therefore, I left to come home, take off the Carhartts and get into different gear (but the same boots) to go do my assignments (which turned out to be another story worth telling... maybe if there is a slow day in the next week).

I am pretty sure that in and out of the Carhartts four times in one day is a record. Not one I feel a need to try to best. As good as they are, the famous canvas coveralls are not meant to be covered in snow so much. The legs were soaked, so I relaxed on the stove to warm up.

Oh, OK... I'm pulling your leg just a little bit. I wasn't really in them. 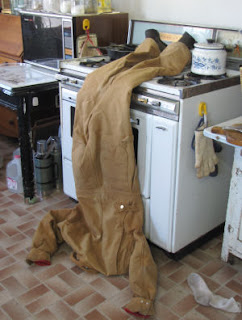 I am assuming that Josh has water since he hasn't come over to complain. Stay tuned. Tomorrow is planned to be another of Ellen and Joan's Excellent Adventures. Tonight... I'm tired.

I love your humor.

And I really like to see you warming up your legs in that position.

I'm out of breath. Hilarious!

And here I was impressed with how flexible and agile you were being able to warm yourself on the stove like that...lol
That sounds like an exhausting day

Big day!!
But don't hold that position too long, the blood is going to rush to your Carhartt head! LOL

rainfield- I'll have to try it some day when I'm feeling extra-flexible!

sisko!- glad you enjoyed it

Ann- haha! now you've all got me wondering if I could manage some sort of similar position.

Ferd- No kidding! It's actually been quite a long time since I've tried a headstand. Maybe I should give it a chance.

Did you feel like they look after that long day??? Ugh.