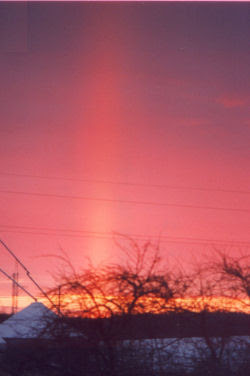 There were so many good comments and questions about the sun pillar, that I went hunting for that older picture. As you can see, I found it. I knew I had written about it before, and that was in December 2005. At that time, I was the web site manager for the North Country Trail Association, and did a near-daily news item.

That morning, a friend wrote me that he had seen a sun pillar over Detroit. He described it as extending about 30 degrees into the sky. That was really unusual, as they usually are 20 degrees at the most. A quick and dirty method of estimating this is to extend your hand toward the sun. A handwidth is about 10 degrees.

The picture today is a sun pillar that I saw from my kitchen window at sunrise on December 20, 1999. If you compare it with the picture from yesterday you will see how much taller this one is. I think it was probably also more than a 20-degree pillar. Yesterday's was just about ten degrees.

Pillars take on the colors of the sun and clouds, they can appear white and at other times shades of yellow, red or purple. They can be seen both at sunrise and sunset.

As a result of that article, another friend from Ohio wrote to me:

"My wife and I live in a fairly rural community and we see these "sun pillars" often in the morning when going to our jobs. It is probably due to the fact we both are driving east south-east directly into the rising sun and yes, it is during the colder winter months when we see them. They are awesome. We observe about a dozen a year. We'll even stop both our vehicles on a back country road on the way to work and observe them together and discuss how unusual they appear to be."

These are not the same thing as Sun Dogs, although both appear as a result of ice crystals in the atmosphere.

They only last for a few minutes, as far as I know. They are like rainbows, in the sense that they are simply a phenomenon of bent light (reflected for pillars, refracted for rainbows). Since the sun or moon has to be very low on the horizon for the angles to be right, as the light source moves, the reflection disappears.

Thanks for so much interest in this wonderful event!

I've been away for a few days and returned to find two stunning photos. :-)

I've never heard of a sun pillar before. Just reading about them on the Weather Doctor. Fascinating.

Good day sharkbyte. This is my first time to comment on your blog and I find the picture incredibly astounding.

I don't know and I haven't heard about that sun pillar. It was really something to really stop, watch and admire it.

I appreciate the info, what a beautiful phenomenon! I often see rainbow clouds here in California in the early morning which are caused by moisture as yours are caused by frozen moisture.

Never seen anything like it, beautiful photo would love to see one.

Totally awesome. I've got to keep a better eye on the sky and watch for these

The phenomenon of nature is always fascinating.

These latest posts of yours are the first I've ever heard of sun pillars. That's definitely something I'll be watching for now.

John- I find them exciting too!

yashiro- thanks so much for stopping by! I'm so glad that you found this interesting.

gallerydarrow- thanks for your comment! We get rainbows too, of course. I'll have to do better at catching a few of those.

Carol- I've seen only a handful, myself.

Ann- judging from the report from my Ohio friends, I would guess that you can see them where you are.

rainfield- sure is! It's amazing what light can do.

Ratty- I love them as much as rainbows- here's hoping you'll see one!

Wow, such an incredible phenomenon. I haven't experienced this. The few times I've seen the Northern Lights, in Alaska and on a Scandinavian cruise, I was totally thrilled. Nature can really put on a show!

Carmen- I would love to see the Northern Lights where they really are spectacular. I've seen quite a few good shows, but I think the colors are brighter nearer the Arctic Circle

Thanks for the f/u post. I am surprised I had never wondered about these, though I have noticed them in the past. Now that I know more about them, I look forward to my next sun pillar!

Ferd- The digital camera makes it more likely that I'll get more pix of them in the future. The 1999 one was on film- it seems like pictures were so much harder then.