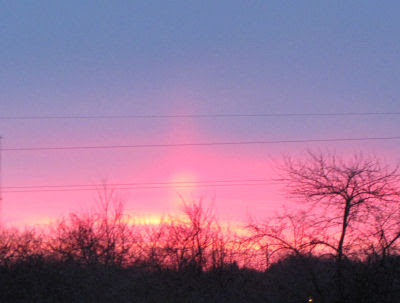 Great atmospheric phenomenon this morning! Not the best one I've ever seen, but they are rare enough that I'm tickled pink anytime I can see one, and also photograph it.

This is called a sun pillar. Actually, they can form in moonlight, or even from streetlights. I've never seen a moon pillar. Now that would be COOL!

These are seen when the air contains flat, hexagonal ice crystals. When the plates are larger than 20 micrometres across they tend to fall with their large flat side parallel to the ground, as if you dropped a dinner plate. (When they are smaller, they just tumble randomly). Because of the hexagon shape, they also tend to gather in formations, sort of like a flock of birds. Light bounces off their edges and because of the non-random crystals, we see the light as a column. The light source must be very low in the sky for us to see the phenomenon.

There is a good explanation at Weather Doctor

They tend to be short, but somewhere, from the past, I have a picture of a really tall one I saw once. If I run across it, maybe I'll use it for a future post.

Great explanation!
I had never stopped to think about that!

I've never seen a sun pillar since we don't have ice crystals here. The sun pillar is a beautiful sight to behold. How long does it last in the sky?

And I think I shall not be able to witness any over my place.

I've never ever seen one of those before. It certainly gets cold enough here for that so I should pay more attention.

for a sec I thought Saginaw might have been vaporized.

Is this the same as a sun and moon dog? I live in the west and have never seen one though my friend in ND has sent me pictures.

that is very cool. I've never seen that before. Guess I should start paying closer attention to things

Ferd- have you seen them in NC?

Chin-Chin & rainfield- do you ever see high cirrus clouds- if so, you might see a sun pillar. There can be ice up high in the atmosphere.

sisko- I'm not sure where you are.

wiseacre- Ha! That would be an event (probably a small one)

Rochelle- thanks! I've answered your question today and provided a link.

Ann- you should get them where you are.

I guess there are some really positive things about living in that frozen part of the world, Joan!!!

Carmen- There sure are! I wouldn't miss my seasons for the world.