I've hunted and hunted online and I can't figure out who created this display. Apparently I didn't take a picture of that info. But it was really, really cool. One of the banners said "An Island of Green in an Urban Sea."

It consisted of wonderful models of famous historic Philadelphia buildings with green spaces surrounding them. The model landscaping was all done with succulents (which some of you know I like a lot).

I apologize for the lack of other information, the models were supposedly made by someone well-known, and I didn't get that info either. For such a famous show, it certainly is hard to find out anything about the exhibits.

Again, it was very hard to choose just five pictures. Here are my selections. First, the classic Philly Skyline. You can see that the model adds green "stuff" around the buildings. Of course, these buildings are close together. 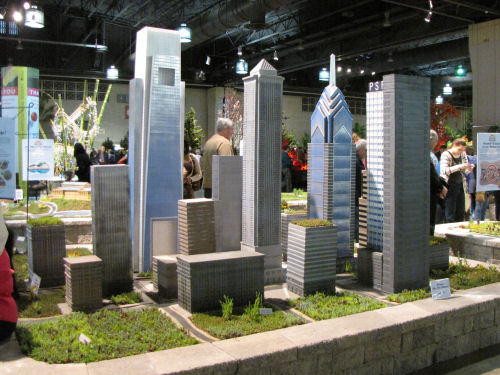 Next, we have Independence Hall. Be sure you remember that there isn't really this much green space around these buildings. The point of the exhibit (I think) was to point out how beautiful the city would be if there were this much green. 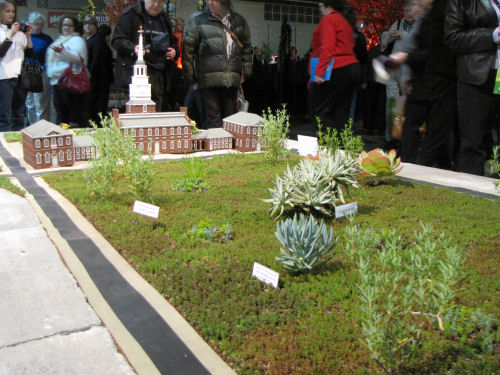 This catches just a corner of City Hall, but I wanted to show a closer view of the detailed plantings that are suggested by the various succulents, and the pool. There actually is a lot of real world clearing around this building. Supposedly there are some gardens going in there. 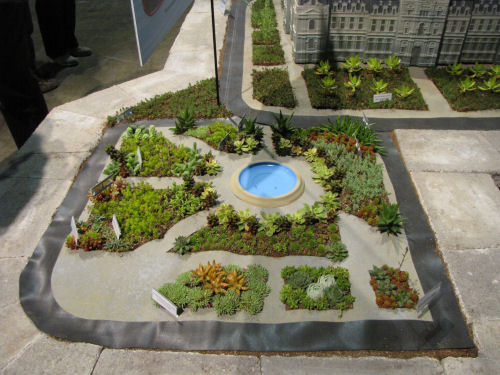 This was the largest display. It incorporates two buildings and two long malls. The last two shots show it from each direction. The large building in the center is the Museum of Art. There is, in the real world, quite a bit of open space in front of it, and we had a nice view from the expressway, coming in to town. The building on the lower right is the Old Water Works, on the Schuylkill River, which is now a restaurant and interpretive center. 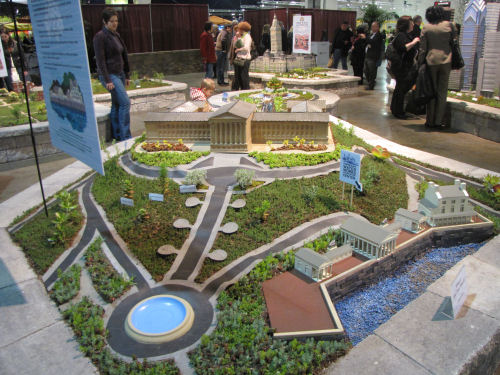 This vertical shot is looking at the Museum of Art from the other direction. Yes those are "Rocky's steps." I really like the planting to simulate a fountain in the foreground. 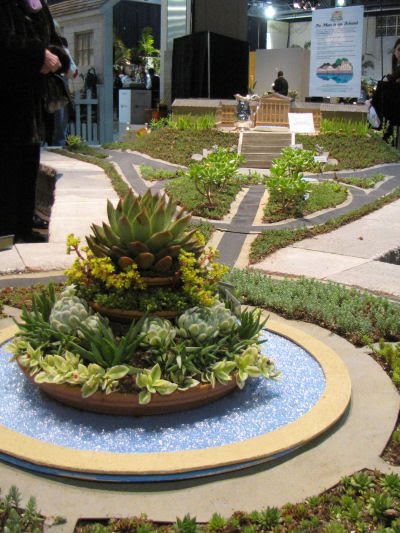 This display must have taken a tremendous amount of work to create. I'm sure others did too, but I like models, and these were wonderful, and then they added plants! I hope the models end up in a museum somewhere.

I usually have a favorite in each of your posts from the flower shows, but these are all very good. I like them all equally.

Those are great. I love how they used the plants

I am glad I stopped by to see these models.

Oh, those are cool! I know my pally, Grace, is always talking about how there is no greenery in Philly--she hates it there. I can't imagine no green! :( I like Chicago because we have LOTS of gardens and green space--even in the city.