I promised you pictures of the Highland Games from Saturday, so I'll produce them tonight. And there are too many pictures, but it needs them all to give you a sense of even the three events we saw.

We watched parts of the stone shot put, the light weight for distance toss, and the caber (log) toss.

Here's the correct form for holding the stone. 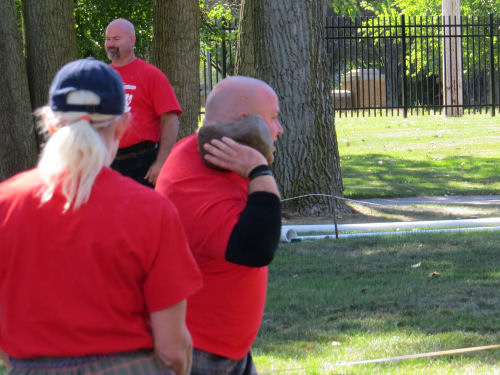 I was delighted to see there was also a women's division! I think they used the same stones as the men for this event. As you can see, Americans wear compression shorts under their kilts (so did the guys). 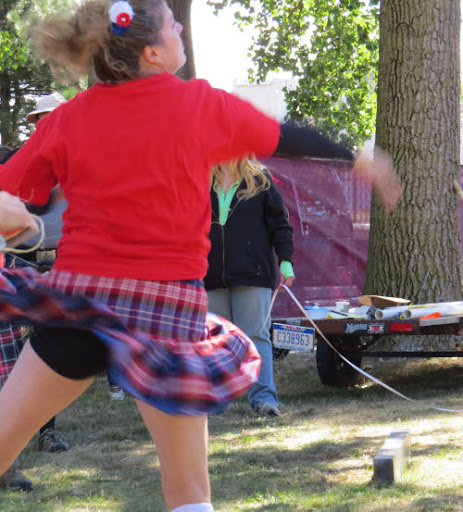 This fellow came in either first or second. It was hard to keep track of the announcements, but both threw over 40 feet! Having always been a Yul Brenner fan, I liked his style (smirk). 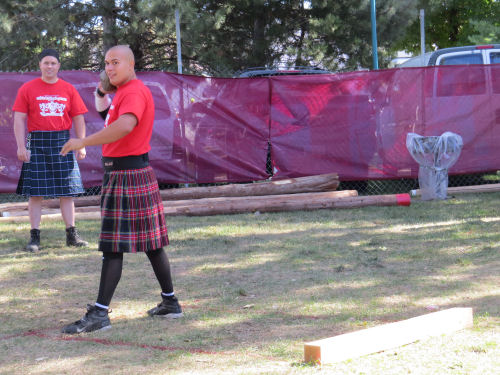 We were there for the beginning of the light weight for distance toss, so got to hear the explanation. A Scottish "stone" is actually 14 pounds, and these weights are 4 stone, or 56 pounds. That's for the "real" men. The masters (over 50) get to throw 3 stone, or 42 pounds. The women throw 1 stone. The weights are fastened to a chain because the originals were used as balance weights for bags of grain, and the sport probably began by some guy saying, "I can throw that farther than you can." You can see the weight on a chain in his right hand. 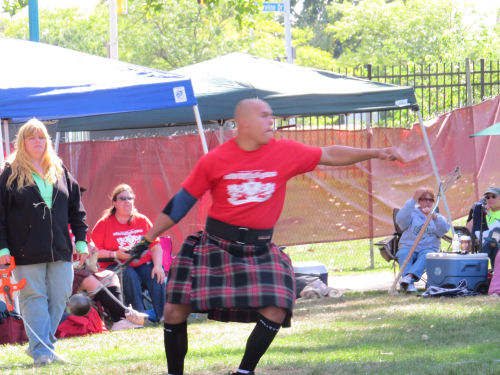 They moved much farther away from the audience for this event! Here's another guy on his way around. They do 1 1/4 turns before releasing the weight. 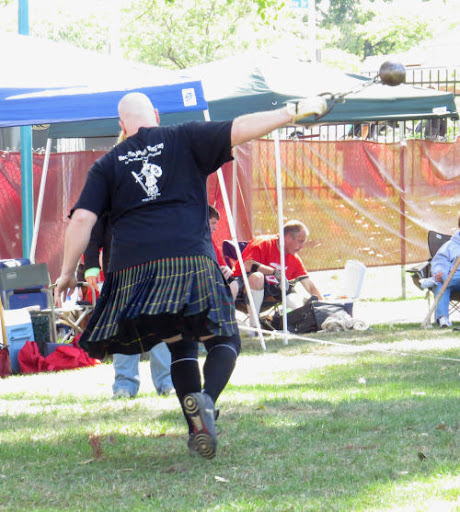 After another concert, we came back and saw part of the caber toss. Again, the women's logs were lighter, but we didn't catch the beginning, so don't know the actual weights. In either case, it took two people to carry the logs to the contestant and get them set up for the lifting. 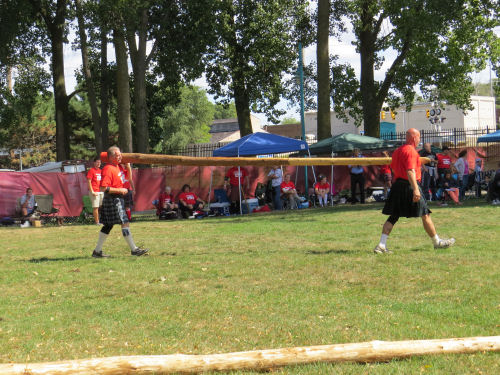 The idea was to lift, get it balanced slightly in front of you, run with it, then heave-ho! It's supposed to flip over, so the end you were holding ends up farther away than the top end. This guy got his to flip correctly. You can see he had a good angle, which gave him good momentum. This was right at the end of the run, just as he was beginning to flip the log. 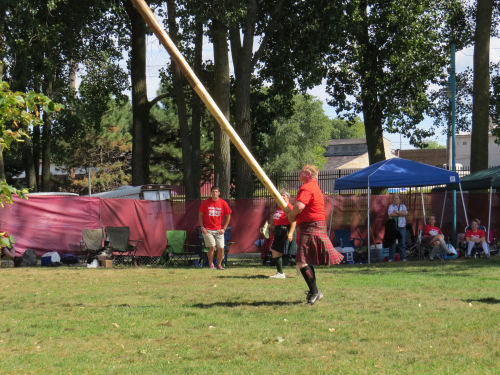 And the girls got in the act too! This gal was "older" and smaller than the others, but she did herself proud. There's no doubt she has muscles of iron. But none of the women were able to flip the log. I'll tell you a secret. I only saw one man (the one above) do it either. I think there is a LOT of technique in this event, as well as brute strength. And being tall helps too. 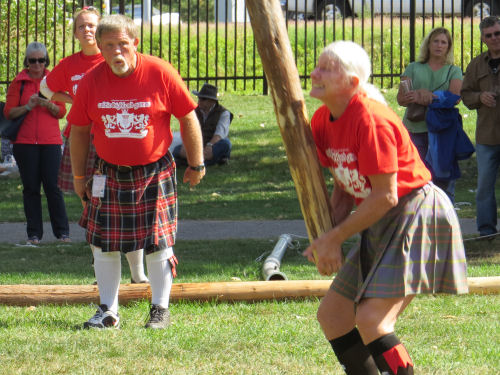 How do you like the expression on the other guy's face?

That really looks like a lot of fun. I'm not sure I'd feel comfortable in a kilt though.

That would be really fun to watch. I can understand why they had to move further away from the audience in that one event. You certainly wouldn't want to get hit with those stones

Spectator sport, for sure. I doubt I could pick up the 4-stone gizmo with one hand, much less twirl it around. And the caber? Forget it.

It looks like a lot of fun to watch, but I'm not going to eat the haggis. No way!

Ann- the guy said, "if you get hit with one of these, you get coloring books for Christmas for the rest of your life."

vanilla- but you'd be so manly in a kilt!

Chuck- I'm willing to try it once. It's lutefisk (different culture) that makes my stomach turn just to think of.

Reminds me of my son, Jeremy's, college decathlon days. He was really good at the throwing events: discus, shotput and javelin. There were 7 other events, besides, for him at every track meet which would take place over two days.