Today, Om and I went to the Michigan Irish Music Festival in Muskegon. 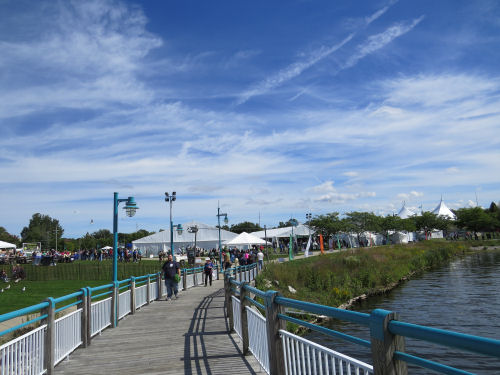 We managed to catch two full shows and a little bit of a third. First we listened to Gasta, two guys who are actually from towns near us. They were on the "second stage," but are destined to become better known, I think. They have a nice varied repertoire. The drummer sings, and plays several instruments, and the fiddler can really play. He did Devil's Dream and he did it really well. 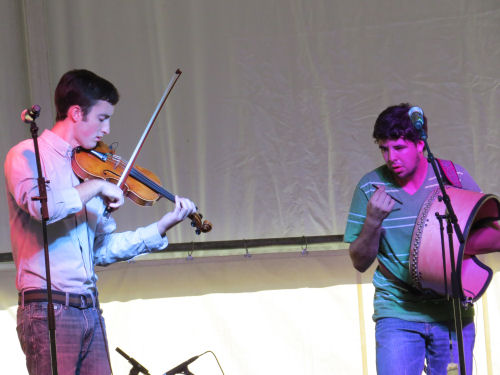 Then we caught one of the top bands, We Banjo 3, from Galway, Ireland. They were very funny, starting with a joke about what was obviously a major flaw in their name (they have four members, and they begin with two banjos, a guitar, and a fiddle). 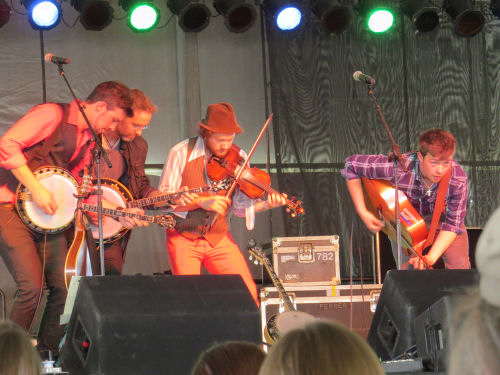 We thought the food options there would be seriously overpriced, but they were ok, so I had a corned beef sandwich and Om had a banger on a bun (which was a brat, and someone said wasn't very authentic). The food was good, and our only real complaint was that the only condiment was plain yellow mustard.

Kennedy & Kennedy; John & Seamus played in one of the smaller tents. Seamus is originally from Ireland, but has been in the US for a long time, and does a combination of Irish, American Folk, and humor. We only heard their last two numbers. One of them was a folk type song poking fun at current television shows, and ending with the line "We need more Andy Griffith and a lot less Jersey Shore." This really resonated with the mostly over 50 audience. 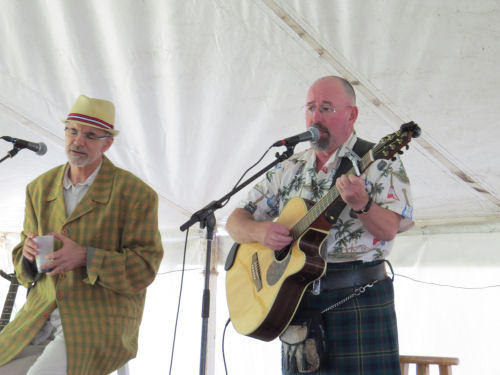 Om would have gladly stayed longer, and there was a band later with an accordion, which attracted me, but I was falling asleep on my feet, so we left.

We also watched part of a small Highland Games event. That needs its own post. Stay tuned. If not tomorrow, soon.

That sounds like fun and from that first picture it looks like it was a beautiful day for it too.

Oh, I'll bet that was great fun! It sounds like a pretty fantastic day … I mean, aside from the condiment choice(s).

How wonderful your Irish Festival sounds. We have many ethnic events like that in San Francisco and I always enjoy them.

I do love folk festivals. The best one I ever went to was in Sidmouth, Devon (England, of course). It was a week long international one with special camp sites. Perhaps I should write a post about it. Thanks for the inspiration.