I've been wanting to start collecting pictures of silo tops for a long time. There are so many variations it's quite an interesting passtime. There were a lot of standardized ones, the half-dome tops, and the coolie hats. But lots of them were homemade, like the first one I'll show you today. The pictures were taken a couple of weeks ago. Today it's nothing except white. 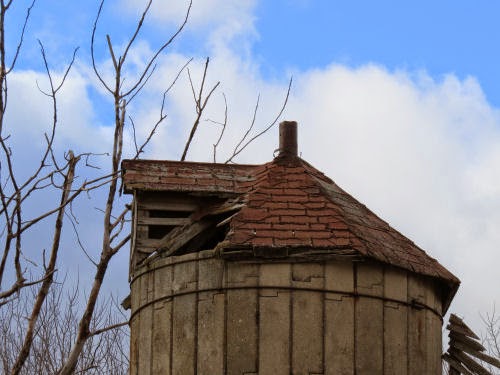 The barn has collapsed, and nothing is left but the small silo. However, you can nicely see the shapes of the concrete staves that make up the sides of the silo. There are more examples of this type of silo at Concrete Stave Silos. 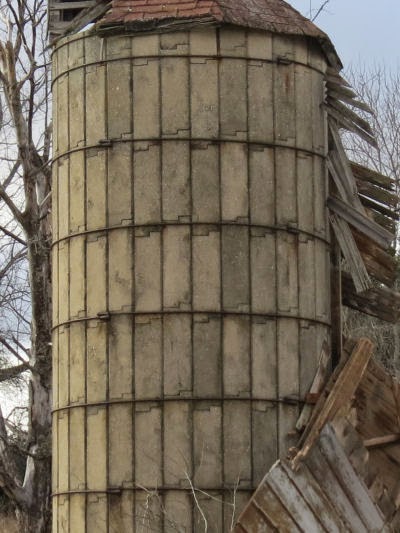 Just across the road was another very old silo with an interesting manufactured top. I don't know anything at all about the companies that made the tops, except for a couple types, but surely not this one. 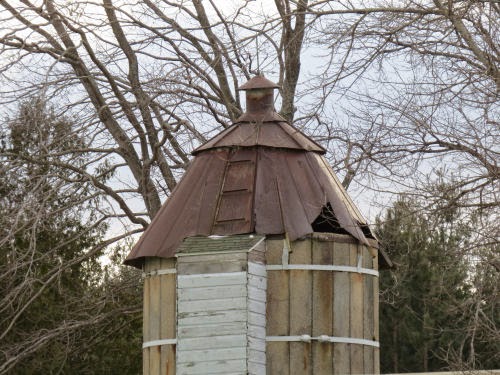 I may have to go back and look at this silo again. It appears to be made of concrete, also, but perhaps of long narrow "boards."

Well, that's good for today. You didn't want to hear more about the snow and the wind and the terrible driving, anyway.

That's right; no we didn't! Neat silos though!

Taking pictures of silos is an excellent idea. There is no shortage of them around here. I've never really paid much attention to them until now. Maybe I'll begin looking a little closer.

The snow, wind and terrible driving is all I've been talking about. Seeing your silo tops was a nice break from that. I like both of these. Almost all of the ones around here have the rounded dome

Silos are very interesting structures. The new [pit or trench] silos are not nearly as photogenic.