Yes, I understand that the usual phrase is "netting the catch," but that isn't what I did. Also, these are from October, but I forgot to show you then. However, I'm sorting photos, and discovered that I'd never shared these, that I was so tickled to catch.

First, a little background. I've hunted for a picture that really explains this, but can't find one, although I MUST have one. Bah, humbug. Anyway, here's the Ludington Pumped Storage Project in a winter shot. 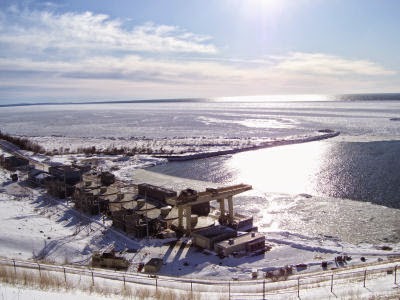 This is the fifth-largest generator of its kind in the world. It was the biggest for quite a few years. They draw water up from Lake Michigan during the night when electric demand is low, and let it run back down to the lake, through turbines, during the day to generate more electricity. It was built in the 1970s.

Shortly after it was completed a huge controversy arose, because quite a few fish were being pulled up with the water and then chopped up when they went back through the turbines. There were two sides to the issue. No one could seem to come up with solid figures as to how many fish were being killed. Some said it improved fishing because the chopped fish served as food for other fish, so there were even more fish. Others said that was impossible, despite that fact that the local fishing improved tremendously near the breakwalls enclosing the project.

The end solution was that each spring an immense net is draped between the breakwalls, which reduces the fish kill. In the winter picture, you can just see one curving arm of the south one, separating an iced portion of the lake from open water.

So here's my catch. I happened to be behind the truck carrying at least a portion of the net to (I suppose) its winter storage location.

At first, I couldn't get a good look at it around that pickup. I wondered if that's what I was really seeing, because that net has to be huge. 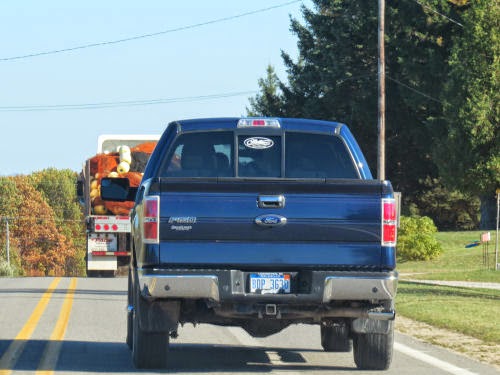 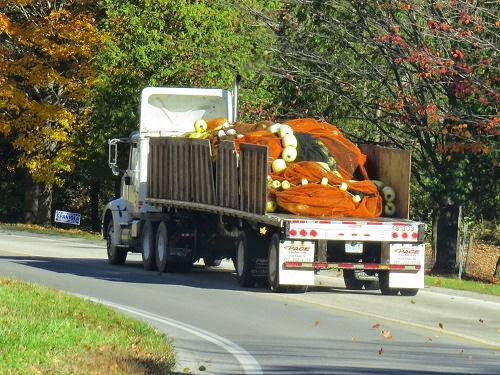 If you want absolutely current quality, I had a totally decadent and unhealthy dinner of chips and cheese. Yummy!

it sounds horrible for fishes to be chopped up like that. Can't help thinking of Nemo.

Obviously the engineers have done the math, but this begs the question of efficiency, given the amount of power required to pump the water up. Clearly it is not a zero-sum proposition, as it is being done.

Some might say, What's a few fish, given our TV and our electronic devices we need for social networking?

Oh no, we need no engineers to count fish.

Engineers always stay near engines. They do not know fish.

I'm just glad something is being done to save the fish. We don't need artificial ways to feed other fish. Let nature sort that out.

There are always two sides to every argument. I would think that the improved fishing would make for a good thing.
I like the sounds of your dinner :)

I think something similar to this is done at Niagara Falls, but no fish problem there!