Where the Deer, Fox and Rabbit All Play


The temperature warmed into the twenties, the sun was occasionally out, and so were the critters. I didn't see any of them, but just like my snowshoe tracks, it's impossible to miss where they've been.

Today I did my long loop (except for going down to the creek which doesn't work well in winter). And my long loop isn't as long as it used to be, but that's not a quality topic. Maybe another day for that. Maybe not.

Here's where the deer play. All the time. 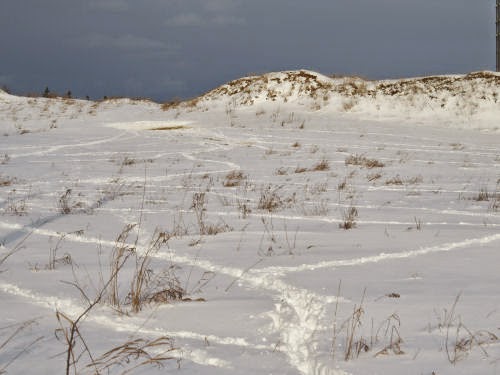 Do you wonder why? I have the answer to that. 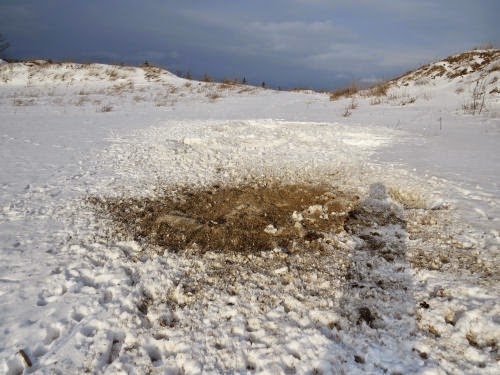 It's the field next to the grain elevator. They dump the tag ends of grain from trucks out in the open area, and year-round, the deer come for a free meal. I think they are getting a fair amount of dirt with their grain right now, but when pickin's are slim, you take what you can get, right?

Next up is the rabbit. You've seen these a lot, but do you remember which direction it's traveling?

Left to right, of course. Big back feet land in front of the small front feet when hopping.

This one's a little trickier. These are from the day it was snowing so hard. The snow was deep and fluffy. Whatever it is, was coming toward me. It looks like there are leaps from one set of tracks to the next, and the pattern is something like a canter. 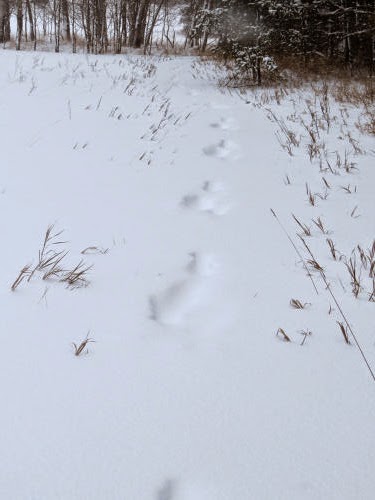 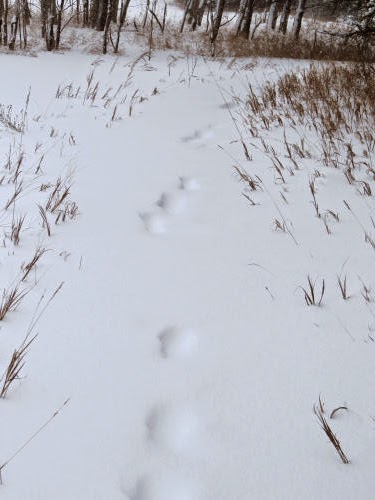 I'm going with fox. This is the area where he/she usually runs, and the tracks came out of the cover of the trees where it had been walking beneath the low branches. I looked for a more distinct print to be sure, but will have to go with my instinct here.

I've wasted more time this month than seems possible, but I'm still enjoying my game. Getting out is good too!

It is always interesting to see what is happening in you neck of the woods. :)

I love seeing tracks in the snow. A fox passed by here while we were gone. He circled the porch, where the chipmunks hide under, and the around the garden shed, where the rabbits hide under .

I've got some tracks in the front yard...I think they are either cat or opossum...it's been too cold to go and and see. Fun to see the comings and goings of the animals isn't it?

So glad the temperature has risen back to 'normal' winter levels, and it 'warm' enough to enjoy being out! Did see a few rabbit tracks on my walk.

Good stuff. I love seeing animal tracks in the snow. I have a pine tree next to my house that has a circle around it of millions of rabbit tracks. I always forget to get any pictures.

that's a busy spot. I did remember about the rabbit tracks so I knew which direction he was going

What a beautiful world we have given and it's so full of life.