All early commerce and activity in this area was defined by the Cuyahoga River. 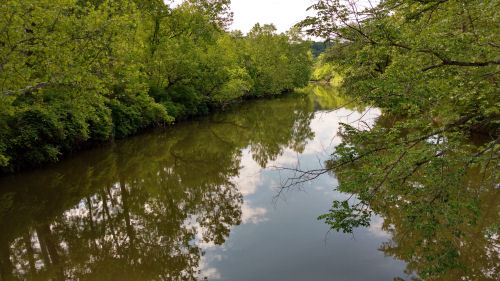 The next day, Thursday, we took off from hiking and rode the Cuyahoga Valley Scenic Railway. There were thunderstorms in the forecast and we decided to see those from inside a train instead of on a trail. It worked perfectly! 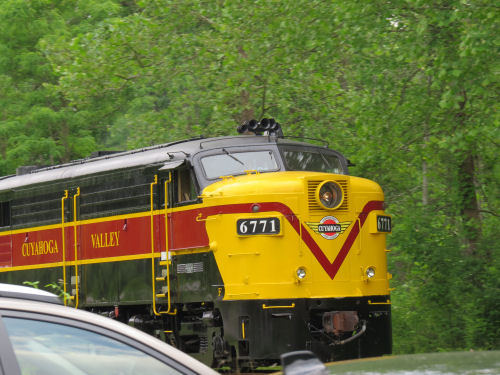 The train goes the length of the Cuyahoga Valley National Park, along the same corridor as the river and the canal, well, and some roads. Naturally, these are all located in the easiest gradient to get from Lake Erie (573 ft) to Summit County and Akron (968 ft).

That same day, after the train ride, the skies cleared and we also visited a small park we had found with this statue in it. It marks one end of the Portage Path, the Native American route from the Cuyahoga River to the Tuscarawas River. The Tuscarawas flows south to the Muskingum, to the Ohio, and thus to the Mississipi and the Gulf of Mexico.

With just an eight mile walk, you can pass from the St.Lawrence watershed to the Mississippi watershed! If we'd had another day, I would have walked that route. It's not really a trail, but there are markers along the way, mostly following roads now. 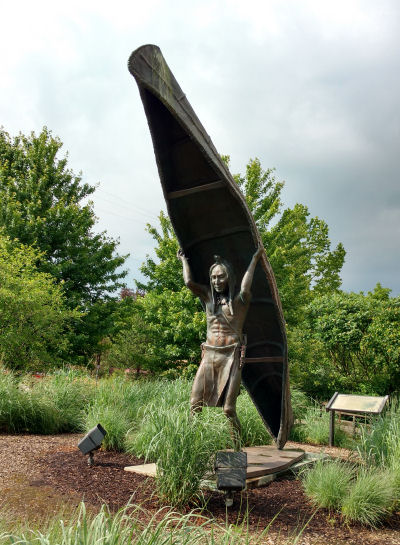 After the hike was over, we also discovered a place to take a canal ride (only four places in Ohio) on a reconstructed boat at the town of Canal Fulton. The boat was towed by horses, not mules, but it was pretty authentic. 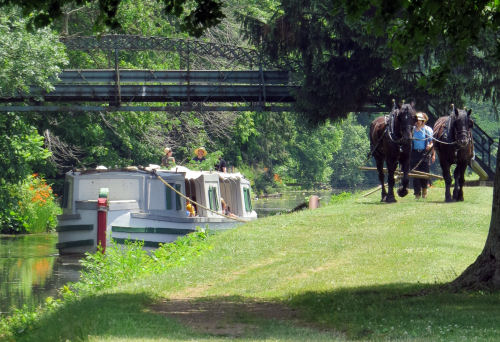 The canal does not entirely follow the old Native American route even though it would have been shorter. However, the state capital at Columbus, is not along any of those rivers. So, mid state, the canal took a sharp turn to the west and went to Columbus before going south to the Ohio!

There were 44 locks to raise and lower boats between Lake Erie and Akron, and more than 50 more to take it south and downhill to Portsmouth, Ohio, on the Ohio River. The steepest rise was approaching Akron on the north side and there were 20 locks practically end to end in stair-step fashion.

As an example of the economic impact of the canal, in 1826, the year before the canal opened from Cleveland to Akron 1000 bushels of wheat were shipped through Cleveland. In 1827 that increased to 250,000 bushels, and by 1840 it was 2.2 billion. Each canal boat could carry several tons of freight. Everything from dry goods to stone to people traveled by canal.

One interesting side note. I had previously realized that counterfeiting was prevalent in Ohio. I've come across many historic sites associated with that activity on my Buckeye Trail wanderings. But I hadn't realized it was a direct outcome of the success of the canals. There was this sudden explosion of economic activity, and not enough cash in the territory/state to cover the needs. Banks, companies, individuals printed their own paper money. Sometimes the fake stuff was worth more than what the banks printed. It's all about trust... then and now.

Most of this hike from here on out will follow the canal towpath trail.

a fun and interesting day

That's an interesting story about the canal. Some of Sylvia's ancestors used the canal to travel on their way to Michigan.