Back to Midland to Mackinac - Day 4

This should have been a message right here. This person must have hiked yesterday, because there was serious rain on Tuesday which would have obliterated any footprints. You will notice this person did an out-and-back hike. 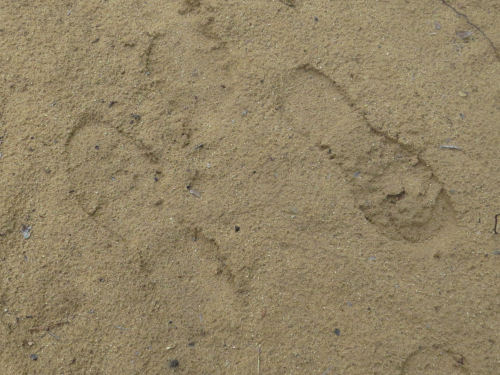 My goal today was to hike from Grim Road to Guernsey Creek, hopefully cross it on a new bridge built by the Scouts, and reach Guernsey Creek Road.

A lot of the path was on two-track roads so I was concentrating on the plants. Here's a super-nifty one. This is a sedge. I know that most people don't care about sedges, but I love them, and this is a bit of a surprise. Tony Resnicek has IDed it coreectly as Carex folliculata. It has the highest Coefficient of Conservatism-: 10. And... It hasn't been found anywhere near the county where I was today. Gladwin County is very under-reported on botanical specimens. 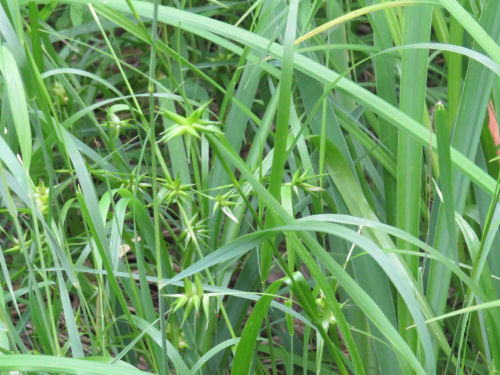 The dewberries are just blooming. It's too hard to tell them apart in the field without books, so I won't try to tell you which species. 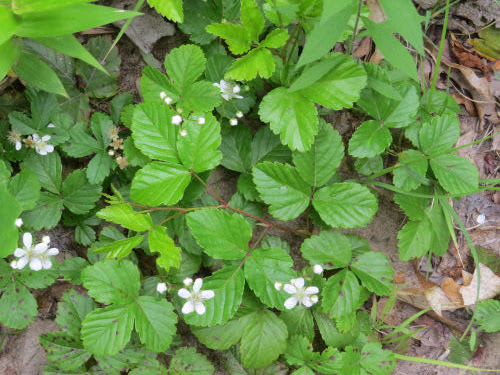 So, I knew it was supposed to rain for about an hour, mid-day. It rained for three solid hours. Just in case you don't get wet enough in the rain, add wading through wet ferns to finish things off. Well, I got to Guernsey Creek. First off, let me show you another nifty plant. This one isn't particularly special, but I like it. This is Common Bur-Reed, Sparganium eurycarpum. The stems are hollow and triangular. 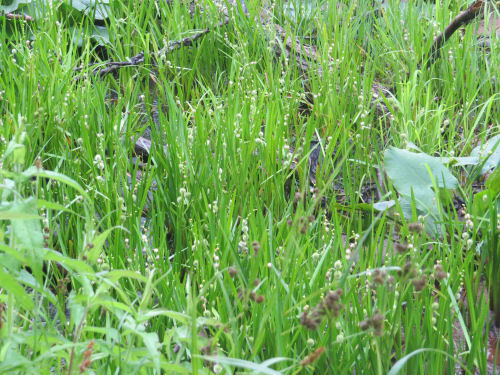 And the flowers are spiky balls on a zig-zag stalk. Just fun- like a plant with a sense of humor. 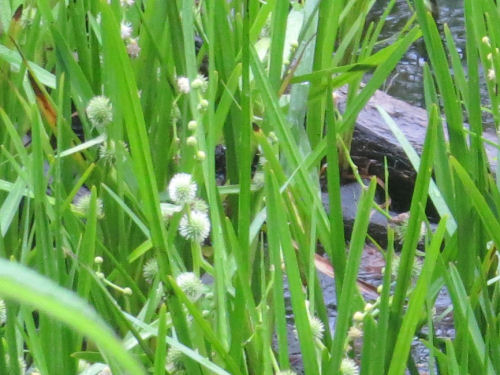 Well, now I'm standing at the edge of the creek. Of course, I've walked an extra mile because there was no turn blaze for where to leave the 2-track. It's pouring. I'm in waist-deep weeds. Here's the creek. I'm in the right place. There's a blue blaze on the stump over there, and one on the next tree too. See a bridge? 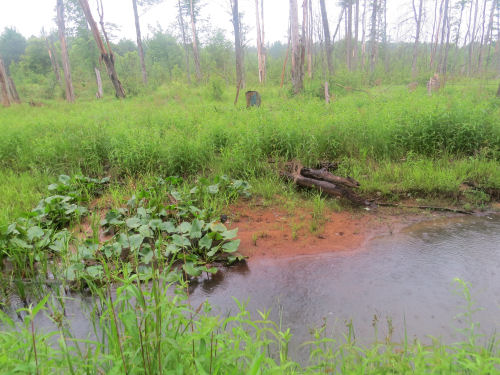 The answer is "yes," however, it's not what you think. The Scouts actually built two bridges. The first one was a large log with the top flattened and a hand rail added. But that got swept sideways during a high-water event. The second one, not as fancy, apparently has now been taken completely downstream. Anyway, look hard and you can see the first one in the grass over there. Notice the cable railing, and then you'll see the end of the log. 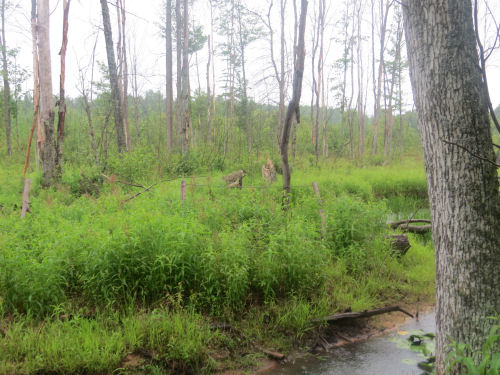 I was only about a mile from the road I was aiming for, but I would have had to try to cross the creek, and then again coming back, so I turned around.

Now we get to the embarrassing part. There was only about a half mile of woods trail to connect a couple of those 2-tracks. The blazes were faded and hiding, but I made it through OK, and added a few pieces of flagging tape where I thought I might need it going back. On the way back, I lost the blazes twice, and I re-found them twice. That is a matching set, so we should be good, right? Nope, somehow I went back the way I had come and ended up at Walter Road which I knew pretty well by then, having already crossed it twice. It's still raining. I'm soaked and hungry, but don't want to stop and eat in the rain. I know where I am. And I know I won't get turned around on the road. So, yup, I walked around to my car. 4.3 miles around, being attacked by so many deer flies that I got out my head net. But at least it stopped raining then.