There I was in the (really) tiny town of Harrietta, shooting a picture of the roof of a house, when a hawk soared over the house. I caught two shots, and they are both pretty good.

I could see it was light colored, but couldn't tell what it was till I looked at the pictures on my computer.

This is an immature red-tail hawk, before it develops the red tail. 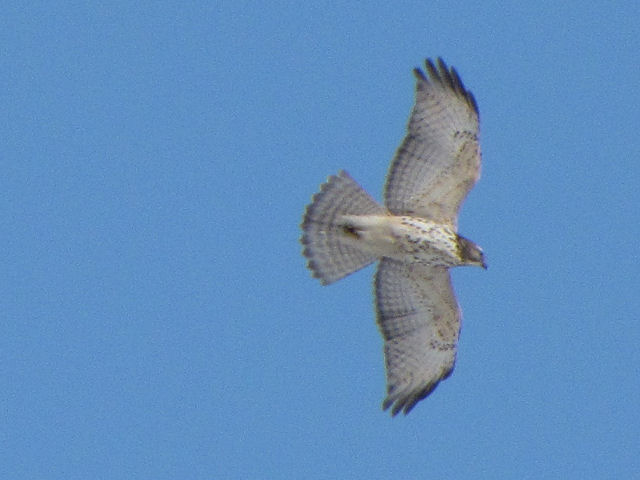 How do I know? Overall, this is a stubby hawk with a short, broad tail. That makes it a Buteo hawk, which narrows the choices.

The tail has a whole series of narrow bars. The breast is light and speckled. The only other choice in this range would be an osprey. But the osprey has longer wings that are bent back at the wrists more like a gull. The osprey also has distinctive dark patches on the wrist. 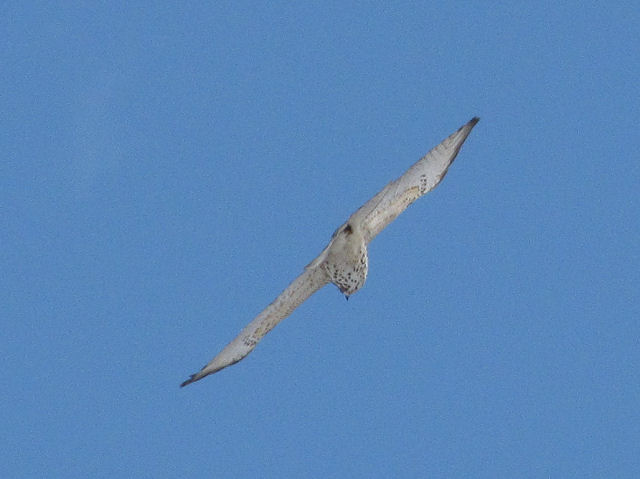 I wish I had pics this good of an adult red-tail!

it's so elegant, love the patterns in its feather.

Lovely shots. Wish I could do that, and not a cloud in the sky!

Those are very good shots. Now I know what that bird I have been seeing around here is. Thanks!

Great photos - love watching any of the birds of prey.

betchai- all the hawks are magnificent!

Ann- there have been lots this year

John- I just keep trying, and sometimes I get lucky

vanilla- nice to see you! sometimes in the right place with the camera

Carole- they just seem so lazy up there.

You got some great pictures of the hawk. I always love seeing them.

Those are great shots, Sharkey! Hard to get from down below.