As a result of my new friendship with author Ron Robotham, I have been reminded of an historical monument that is out in the middle of nowhere in Oceana County. For some reason, I never shared it on this blog. Today, I hunted through old pictures till I found it.

If you are local and care, it's at the corner of Taylor Road and 144th Avenue, just south west of Walkerville. 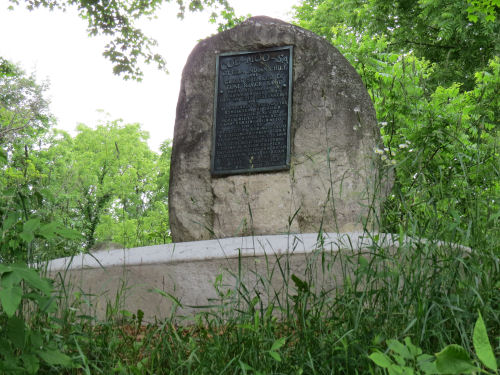 You have to scramble up through weeds to get to it. I think I cleared it off a bit to take these pictures.

Cob-moo-sa was an Odawa (Ottawa) Chief who negotiated that his people would be able to remain in Michigan rather than be relocated to Kansas. Apparently there was a reservation with its northwest corner in Scottville, and southeast corner near Walkerville. The monument seems to imply it was within the reservation boundary. I have to like the meaning of his name, which is "Great Walker." 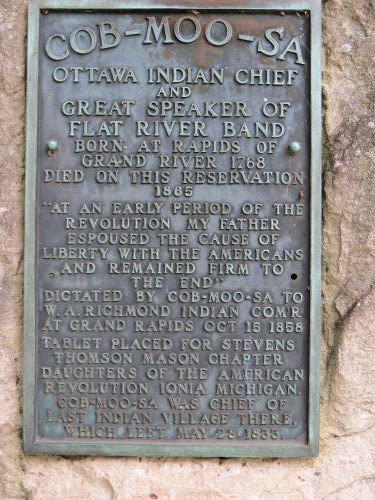 Here is the text of the monument: Cob-moo-sa, Ottawa Indian Chief and great speaker of the Flat River Band. Born at rapids of the Grand River 1768. Died on this reservation 1865. "At an early period of the Revolution my father espoused the cause of liberty with the Americans and remained firm to the end." Dictated by Cob-moo-sa to W.A. Richmond Indian Com'r at Grand Rapids, Oct 15, 1858. Tablet placed for Stevens Thomson Mason Chapter Daughters of the American Revolution, Ionia, Michigan. Cob-moo-sa was Chief of last Indian village there, which left May 28, 1835.

In other news: I did a bit more mowing.

Email ThisBlogThis!Share to TwitterShare to FacebookShare to Pinterest
Labels: history