It was a really early start for me. Actually, not the earliest I've ever made it on the trail, but close. We spotted my car and then Sue dropped me off at a road corner with my pack and gear and a half piece of apple pie hoarded from last night's dinner. It was barely light! I ate my pie and started off on one of those unnecessary loops that adds three miles of trail where a one-mile road walk would get you there. But I'm trying to do "the trail."

If it hadn't been so wet and foggy, I think there would have been some views because the trail climbed a ridge and stayed up there for a while. 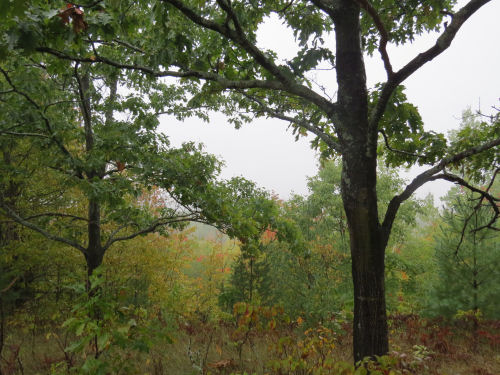 I kept seeing these weird fungi all day. It breaks open like an earthstar, but the ones without water didn't seem to have the central button of the earthstars. I have no field guides with me. But they were neat. 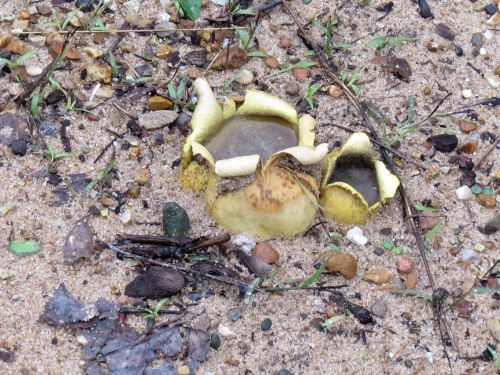 I walked in steady rain for two hours, and then it backed off to just a drizzle. And, of course, there was the nearly obligatory bushwhack when the blazes disappeared. Actually, I was somewhat concerned about having to do a bushwhack today. This piece is really out in the boonies. There were very few things one could bushwhack toward and be sure of finding. I explored both routes available when the blazes ended, and both led to dead ends.

At the end of the second try, I actually considered turning around, walking all the way back to the main road, and around on roads to get my car, because I wasn't even sure how close I was to where I needed to go. But I had just enough service to get my location. It said I was 1000 feet from the two-track I was trying to get to. The problem was a huge wetland between me and it.

Once you commit to bushwhack without being certain of finding the same path back you'd better know where you are headed. I didn't feel really good about it, but I worked my way west (I could hear an occasional car), and eventually came out on a two-track with BLUE BLAZES, and was only a few hundred feet from Stoney Creek Pond. Right where I needed to be. Thank you, Lord! 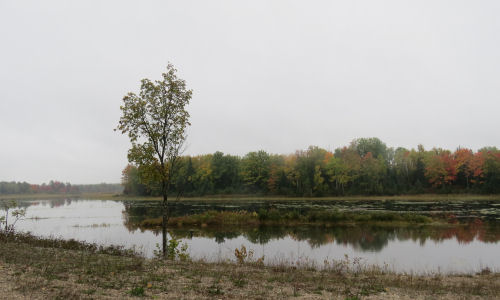 When I got to Stoney Creek Campground, I made new friends who fed me a hot and satisfying lunch of potatoes with sausage, eggs and vegetables, and a big cup of orange juice and a gingersnap. That was quite a treat! Multiple dogs, Bandit the pet goat who is housebroken, and two horses. Nice people. And they said if I lost the trail beyond there I could come back and they'd drive me around to my car. This was very reassuring, because the next three miles were some of the ones I was most concerned about. Trail angels! 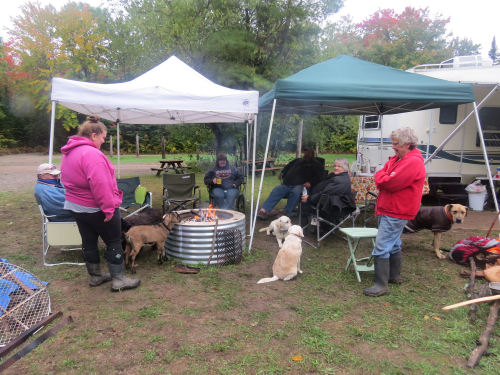 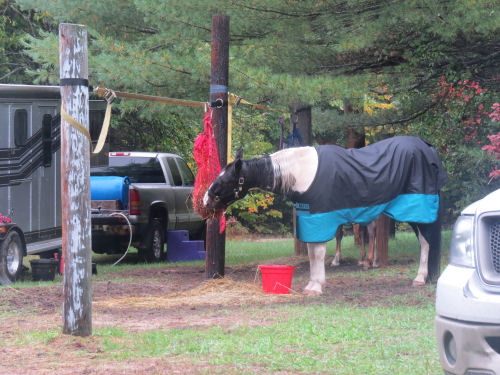 However, the trail was really well marked for the rest of the day and I never lost it again. Loved the water drops on the aspen leaves. 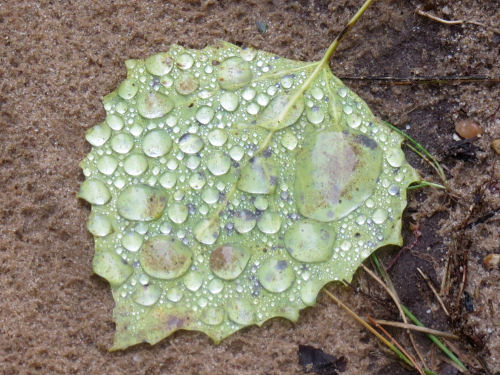 The fall colors are showing more and more. OK, just because I could find the trail didn't mean it wasn't without a couple of issues. Here's a beaver lodge for you. Where beaver lodge, they build dams. They are trying to take over the "road" the trail followed all afternoon. They have built five dams to expand their ponds which is causing water to flow across the road. This is in addition to all the ordinary kinds of puddles. I managed to walk across the first dam, but the others were overgrown with saplings. I just had to wade the ponds. Nothing over knee deep. Kind of begs the effort I spent to stay more dry all morning in the rain, however! 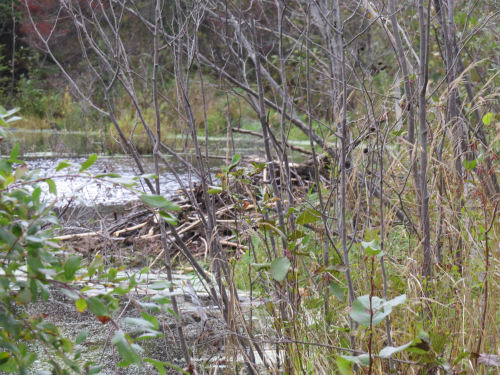 One more bright and cheerful hint of fall. 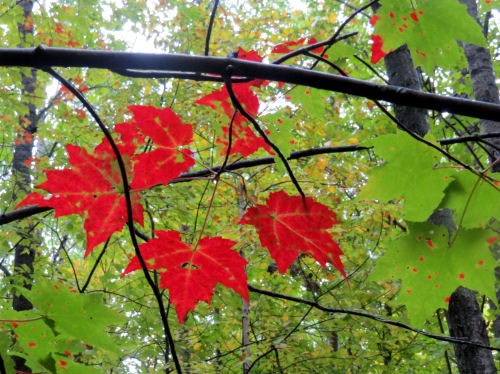 I reached the car at 2:40, which is nice and early, but remember, I'd been walking since 8 a.m! I also saw a kingfisher, a blue heron and another grouse. I haven't mentioned these, but I flush one up almost every day.

Anyway, miles for the day that count as forward progress: I'm saying 13.5. Miles actually walked: maybe 14.5. Total miles of progress on the trail: 165.

This is adding up nicely, but there is no way for me to finish in the remaining time I have. I'm going to hike tomorrow, since the weather looks decent. Right now, they are saying thunderstorms for Monday and Wednesday. I may go home, and try to get someone to come back with me after the weekend to spot me for the three or three-and-a-half days I'll need to finish.

This seems like an amazingly fun adventure. Even though I've never been able to hike as far as you do, after reading this I really miss the longer hikes I've done.

Well the trails seem to be getting better the further into this hike you get. I don't know that I could nagivate through the woods like you do withouth the blazes.

hello sharkbytes its dennis the vizsla dog hay this sownds like sutch a gud time owt wawking in naytcher!!! my dada sez wun of his fayvrit parts of a long hike wuz always spotting the car at the end i am not shoor why maybe he wuz afrayd it wood hav ben stolen by a bear or sumthing??? ok bye