Couldn't allow Sue to get away with not having an adventure. We definitely had one. Fortunately, it was early enough in the day that we weren't worried about getting back to the car by dark or anything.

We finally sat down and took a break and had a snack because at this point we had pretty much figured out where we were. 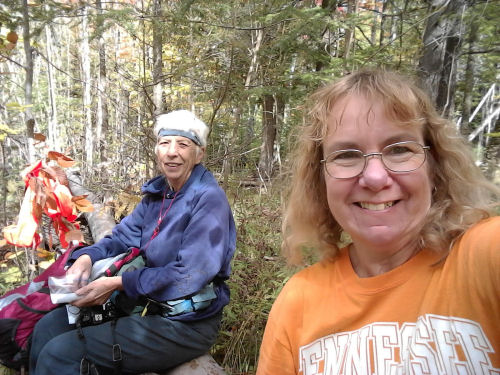 First, I need to explain that we did not hike a piece contiguous with what I've been doing. The roads to connect to the next piece are iffy anyway, and the water is really high here. There were some bad places with water across roads yesterday and that was before it rained even more last night. Also, this motel is pretty far from the connecting pieces. So we chose to hike something closer that looked like it had slightly better roads to get to.

I think we made the right choice. We were walking around puddles or sloshing through places where we couldn't get around most of the day. That's a big puddle ahead of the dogs. 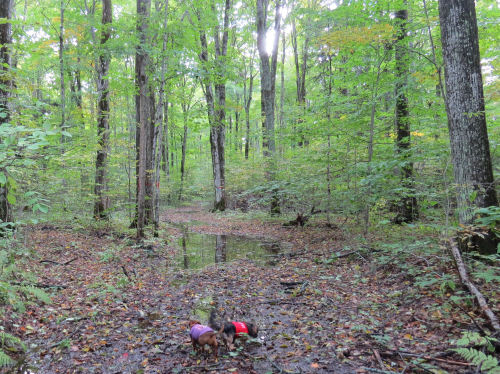 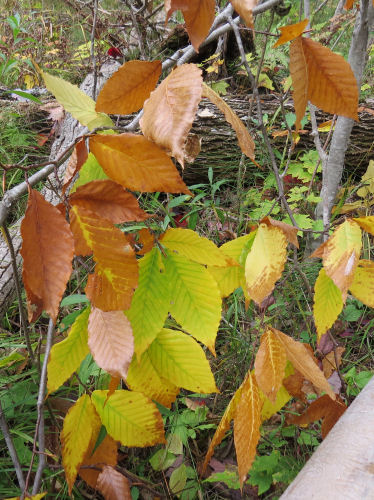 Sue kept track of where we walked. Here is our path for the day- lower left to upper right. See the problem? 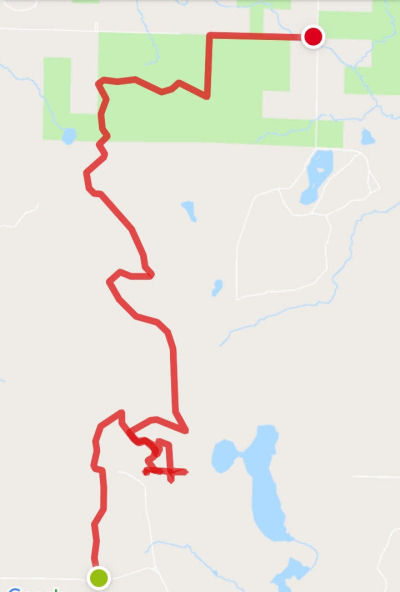 Anatomy of a bushwhack- skip if this does not interest you.

Let me show you that little adventure mess more closely- blowup below. The light blue line is what my map told us the route was going to be. The dark blue line is places where were were following blue blazes. Point 1 is the first mystery. We were looking for that turn to the east, and seemed to have found it, but lost blazes. So we went back to the corner and sure enough found blue blazes heading off through a very grown up bunch of saplings. This sure wasn't going the right direction, but we were following blazes, right? So this led us into a nice open valley where the blazes ended. The two of us hunted all over, on every ridge and down every possible angle. No blazes. Wetland ahead (and in the wrong direction). So we went back to the corner and continued east. I figured we'd find the turn north at some place. Point 2 was a little detour taken on purpose to look at a very large grassy clearing that just seemed really odd in the middle of the woods. Then we went back and continued east, still looking for a turn to the north, since the one we'd just crossed had no blazes. Well, that was bad. The walk out to point 3 was horrible and then ended. Shown in next picture below. So we turned around and headed north on the two-track at 4. We stayed on it because walking any kind of track was lots easier than bushwhacking, and it had been driven, so it had to lead somewhere. Came to another two-track, and... are you ready? Found blazes! Next mystery- we found a footprint of mine going in the opposite direction, so clearly we'd been on this section before- point 5. Huh! So we decided at worst we'd walk back to the car and drive around to the next road. Found the turn to the right (that would have been a left coming the other way- but didn't see because there were also blazes going straight- so how would you choose even if you'd seen both choices?) and took it. Rest of the walk to get us to the sharp left turn on Dog Lake Rd at the right of the map was not great, very little traveled and many down trees and saplings, but we had blazes and we were sure we hadn't seen it before. And it was going east, so sure to run us into Dog Lake Rd.

Total time spent making that little mare's nest- 2 hours. This is what frustrates me so much. The rest of the day was fine, but I was hoping to do another 2.5 miles that there just wasn't time for. 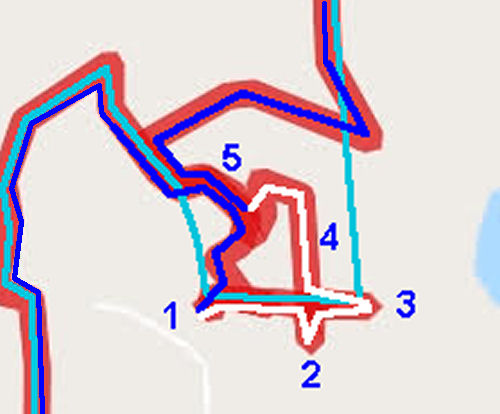 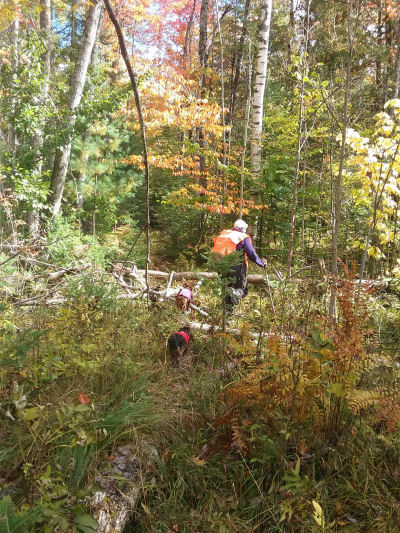 But the afternoon was gorgeous, and the temperature was cool, but nice for hiking. 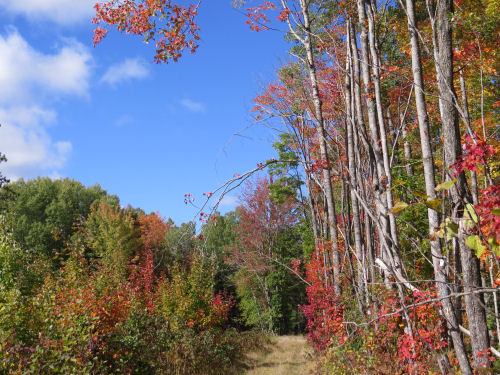 Late afternoon shadows as we approached the car on a "real" road. 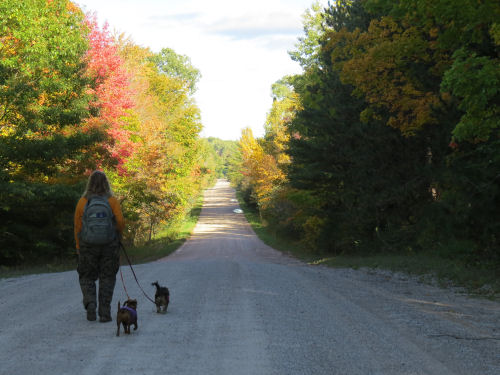 Anabelle likes to keep track of the world from the dashboard. 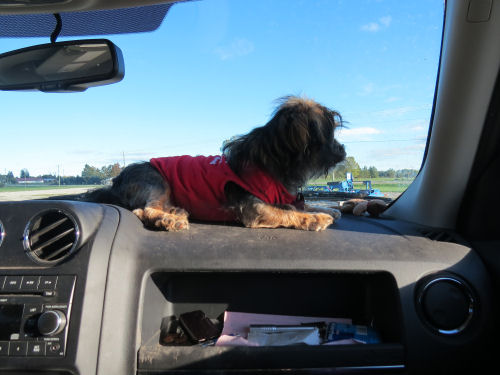 Sophie especially likes the comfort of a bed after a hard day's hike. 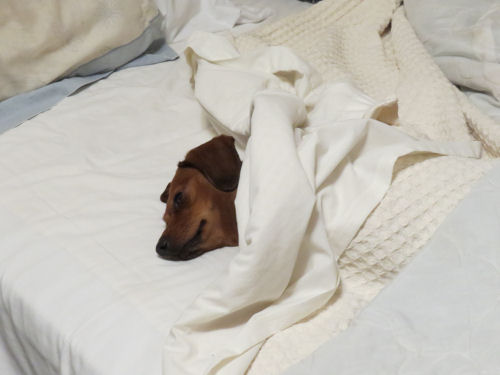 Tomorrow, we'll connect a piece farther south, but I'll just have to work on joining the two pieces after Sue leaves again.

I think I would have just been hopelessly lost out there without clear blazes and trails to follow.