Look who joined me today! It's Sophie and Anabelle.

It took us a while to get together and get re-organized, since neither of the humans in the party wanted to camp in a monsoon. And a monsoon is what northern Michigan delivered this morning. Serious rain, lightning, thunder, water across the roads. 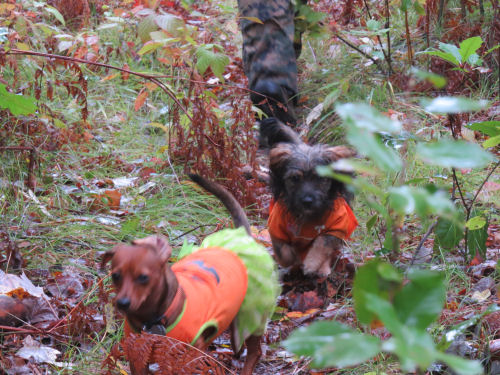 Anyway, we are now in a warm motel room. Sophie is curled up under the covers by my leg, and Anabelle is watching faithfully for Sue to come out of the shower. I got kisses from Anabelle, so I've been accepted, but Sophie just really, really likes me!

We got settled at the motel, and checked the radar, which seemed to be saying we could be in the clear by the time we got back to the trail. So, we spotted a car and started walking at about 1:30 in the afternoon. About 9 miles to the car. 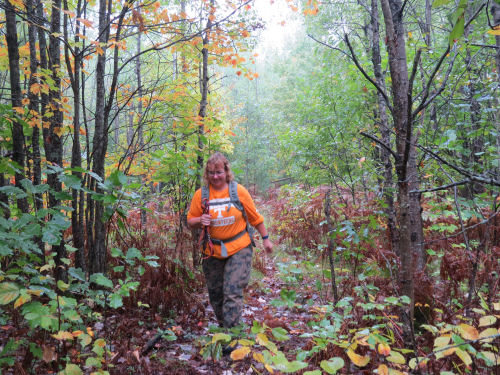 The first four miles were through very wet woods, some on a two-track, but some where we just got soaked. But it wasn't raining. Then there was a road walk. The fog made things look interesting. 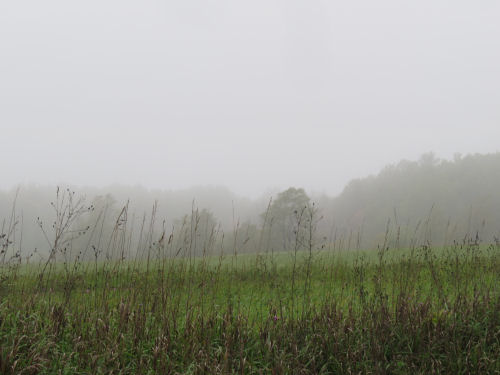 We passed this sign. I actually knew what it is, because I had stumbled across a description of the trail a few years ago. This is supposed to be a driving route, the Michigan Polar Equator Trail that more or less follows the 45th parallel. I have read that it really can't be found anymore. But, of course, now I've found a marker... I want another adventure. 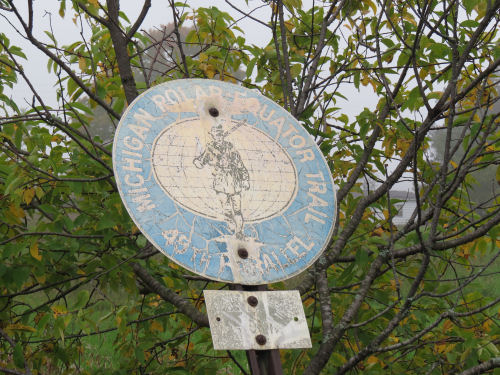 We reached the car at 5 pm, but hey... Sue said she and the dogs would drive around an meet me at the next road if I wanted to do three more miles. Sure! So I started out on Valley Road (a pleasant route that really did stay in a valley), because as well as I knew the trail stayed on that. Nope. Took me off in the woods and I came out on another road, and had to figure out that I needed to turn around and take the road in the other direction to find Sue. No cell service, of course. But we got together by 6:15. 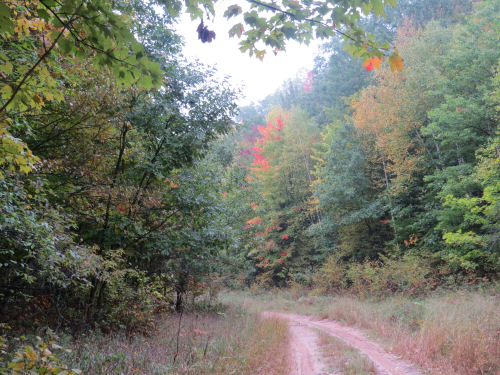 Then we had to drive back to the motel, which is a little farther away from the trail than would be ideal. So we got here at dark. No microwave in the room, and neither of us has much interest in setting up the stove yet tonight. We are eating cold odds and ends.

The sunset isn't spectacular but looks promising- solid gray sky breaking up. If the weather forecast that's been mostly wrong all trip is accurate there could be more storms tonight, but tomorrow could be nice. We promise to start hiking before 1:30! 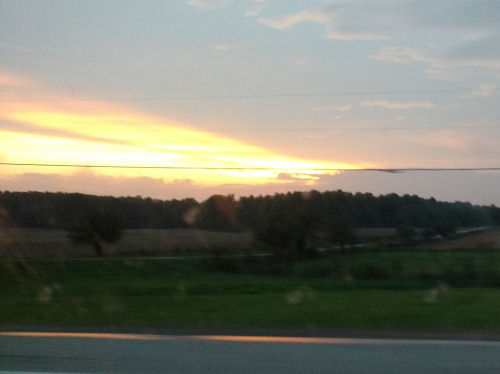 Miles of forward progress on the trail 12 miles (not bad for such a late start), Total miles walked- I did about 13 since I had to backtrack to get to Sue. It feels SO great to have the miles walked be just about the same as the miles that count! Total to date: 129.5

That is a lot of miles for the time you got started. Sounds like a great day