One other bright spot from yesterday. One shopper was carrying a dog so small I thought it was a stuffed toy at first. He's a tiny Jack Russell Terrier named Oliver. Yes, I got to hold him. He's only 7 weeks old, and in addition to being tiny he was incredibly calm. In fact, I'm not sure I've ever seen that calm of a puppy. 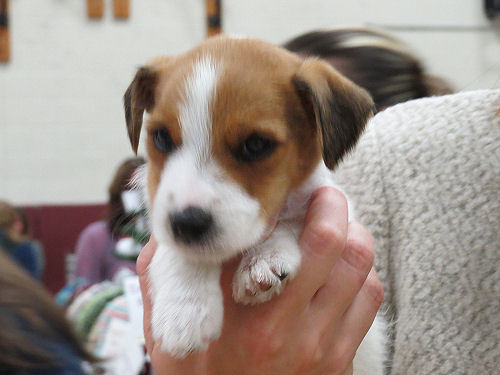 He wasn't much bigger than the toy I have of Wishbone, the TV star Jack Russell. When you squeeze the stuffed one's chest he says, "Be like me. Read a good book." Sometimes I squeeze him just for the smile. Maybe some day you'll see my small collection of little stuffies.

In other news: I did a load of laundry and a little outside work today. Making one more batch of muffins too. Omer really likes them.

Lulu: "Hello cute puppy! Do you want to play?"
Chaplin: "I think you might need to wait a few months before that puppy would be even close to ready to play with you, Lulu."
Lulu: "Awww. But I want to play now!"

Aww, he's adorable. I had neighbors who had a Jack Russell. All that dog ever did was bark. Then ended up getting rid of it when it bit the woman. I'm sure Oliver will be a much better behaved dog.

Nothing like a bit of puppy love to make one's day.