Muskegon State Park and a Mini-Miracle


The sales event finished at 2 pm, and the day was beautiful, so I went to Muskegon State Park and took a little walk.

First the mini-miracle. I had thrown walking shoes in the car, but no alternate clothes. I was wearing light tan pants, which should have almost guaranteed I'd fall in the mud. And when you see the pictures you'll know that is no idle claim. But I did not get muddy. Wow. I'm ruining my Pigpen reputation, I guess.

This was spur of the moment, and I was glad there were some trail maps at the kiosk. A web site said you could do a 4.2 mile loop with the Devil's Kitchen and Dune Ridge Trails. In theory, this is what I did, but the trail signage leaves a lot to be desired, and the paper maps are copies of copies of copies... hard to read.

Anyway, I left the Snug Harbor parking lot and headed south. I would have avoided some disorientation later if I'd noticed that the map is printed with North to the left, instead of up. This wasn't a major problem, but I was momentarily confused when I came to Lake Michigan after hiking what I first thought was east!

The first part of the trail was wide and inviting. 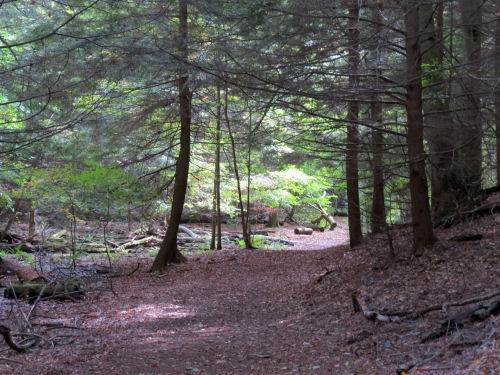 But then it came to the Devil's Kitchen, a long narrow bayou of Muskegon Lake. The park gets bad points for signage, but I'll grade on a curve because of the high water this year, making lowland trail maintenance difficult. However, when I came to this, I just said "no," because I wasn't going wading in muck. 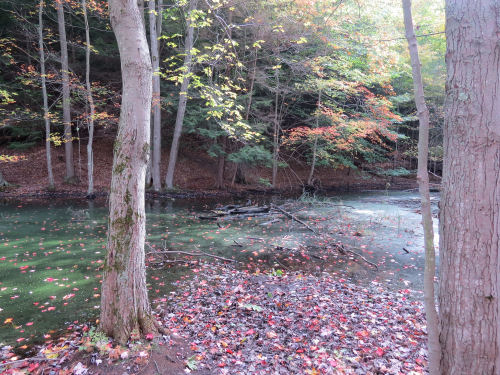 A short distance up-bayou was this crossing. Not too unsteady. Still, I thought sure I'd dunk a leg since I was wearing good clothes, but I didn't. 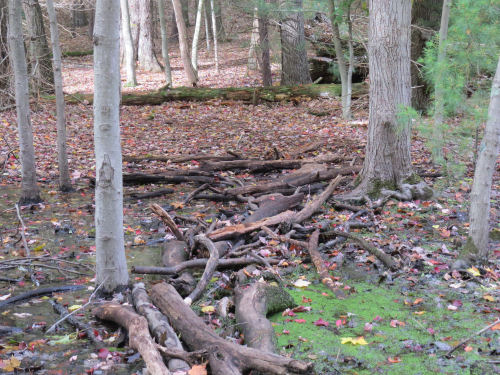 On the far side there were trails all over the place, unmarked, so I picked one that climbed, and found myself, after a bit, on the Dune Ridge Trail. This was fine, although my original intent was to take the Devil's Kitchen Trail out and Dune Ridge back.

Soon I was approaching Lake Michigan with views across the dunes. 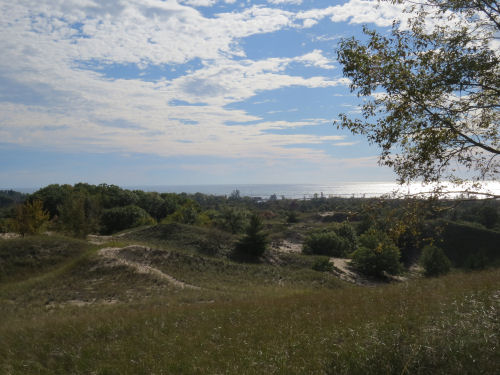 I caught a shot of the Lake Express ferry (Muskegon's rival of the Badger carferry in Ludington). It's coming in the channel from the big lake to Muskegon Lake. Then the Dune Ridge Trail drops down to the lake level. After some paved walking past the south campground loops, the Devil's Kitchen Trail heads back along the shore of Muskegon Lake. 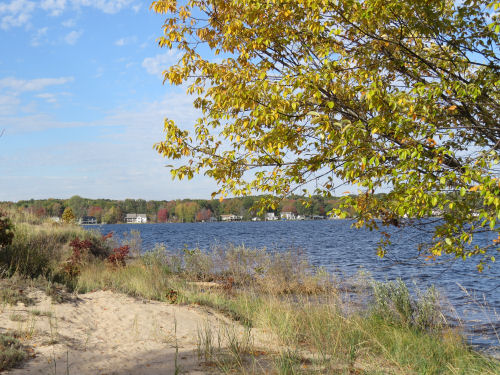 So, I'm thinking about that bayou-kitchen with high water, and wondering how this trail is going to get around it, or if I may need to turn around and backtrack the whole thing. Well, it was a nice day, so what if I have to?

The trail got narrower and narrower, but there was still a little dry ridge between the lake and the bayou. (If you danced between the waves.) 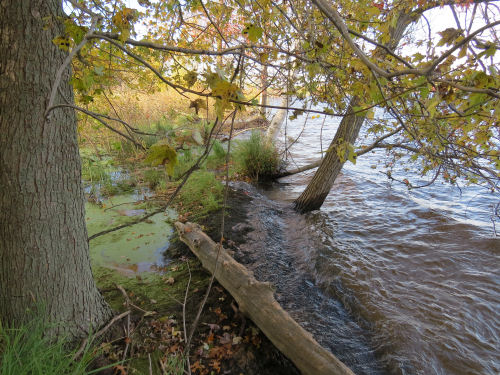 Until there wasn't! With solid brush beyond. 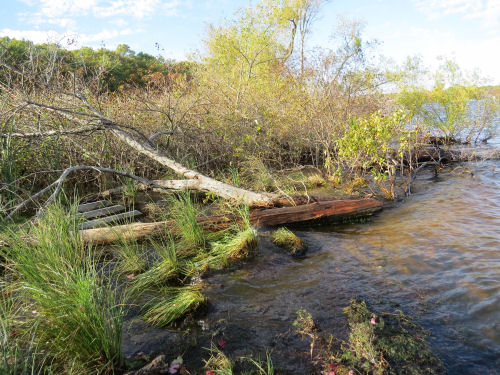 So, I turned around. But at the bottom of the dune where the Kitchen begins, there was a narrow trail I hadn't noticed that leads along the edge of the bayou. I took that, and soon was deciding between a somewhat dry ridge, or to walk around the head of the bayou. The ridge looked iffy, so I kept going, and the trail did just circle around the bayou, completely dry. As I came back to the actual trail, ha! That ridge was indeed the trail, and it was where I had earlier crossed on those sticks.

One last view of the Devil's Kitchen from near the head of the bayou. 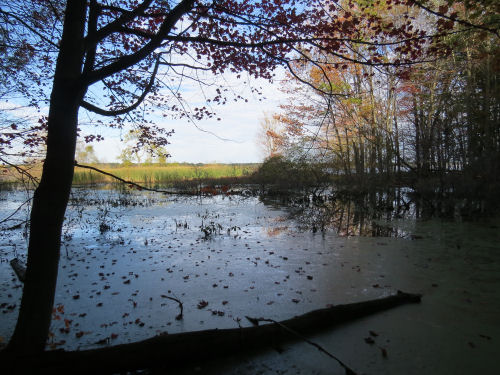 And I just liked the reflection of the red leaves in the puddle. Took me two hours to do the loop. Probably about four miles, what with loose sand on the dune, taking pictures, and trying to figure out the correct trails.

If you do this, I suggest at least having a map. My route is in red. I started and finished at the north end. 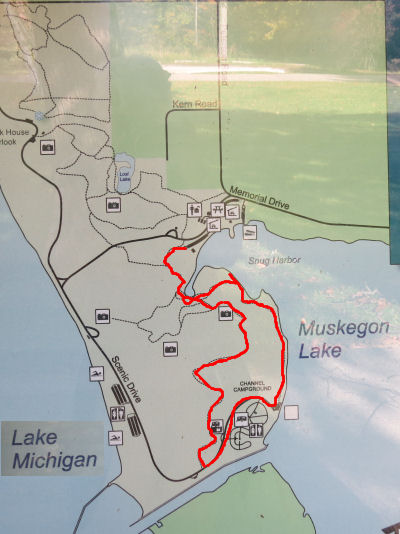 In other news: The show was fine, although I sold 4 times as much last year. Last year, it was in November, and I suspect people were Christmas shopping in earnest by then. I made some money today, but not nearly as much as I'd hoped. The hike redeemed the day.

Posted by Sharkbytes at 8:44 PM

That was some hike you took. I would have definitely ended up falling in some water or mud.