I didn't get much farther into the pictures before finding another plant with uncertain ID. It's certainly a mimosa. 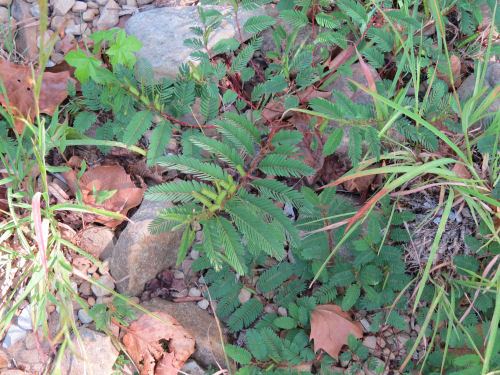 What I did not previously know is that there are about 450 species in the genus Mimosa. Some are trees and others are trailing vines.

I would assume this to be the invasive and alien Mimosa pudica or common sensitive plant, except that the seed pods are wrong.

In the first place, I didn't know that mimosas are legumes... that means they are in the pea family, so they have those same kind of pea-pod seed case shapes. You can see that above. But here's the ID problem. In M. pudica the pods are arranged in whorled clusters. These, as you can clearly see, are spread along the stem. 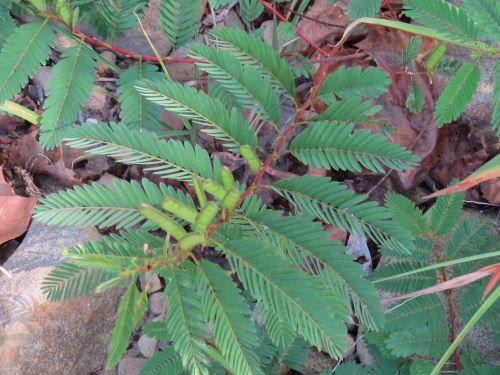 The other thing I did not know is that mimosas have thorns. See those nasty buggers along the stem? 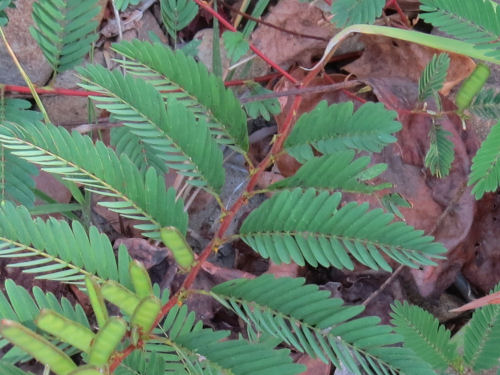 In fact, the very unfriendly plants known collectively as cats-claw, which mostly grow in states like Texas and the southwest, are also mimosas.

And I learned that as attractive as the tree species can be, they are obnoxious, messy and invasive plants. One garden site said the best time to prune a mimosa is whenever you have a chainsaw.

Just as a curiosity, it did not fold its leaves when I touched it, but I guess that was a fluke. It's clearly some mimosa.

The most fascinating thing is the mechanism of sensitivity. I learned a bit about this when I was teaching Human Anatomy (one semester as an adjunct prof). It's the whole question of how are mechanical stimuli or chemical reactions transformed to electrical current? In a body this question relates to how nerve cells pass electrical impulses across synapses. Well, remember that an atom is basically electrons buzzing around protons, and that chemical bonds are formed when elements swap or share electrons. But cell membranes can't let large ions (molecules with an electrical charge) through (usually, calcium, potassium, and sodium), but there are special channels, some for moving ions upgradient (this requires energy) and other passive channels which allow ions to flow down gradient. Thus the movement of chemicals creates electrical current.

In other news: I didn't sleep well last night, and spent a lot of time just listening to music. So, slept late today. But I did get a lot of writing done after I got up, and did some other things that needed to be done to be ready for a large vendor event this Saturday.

This was quite a lesson today. I didn't know the first thing about mimosa so it was all new to me.