Today I bring you the fearsome Bold Jumping Spider, Phidippus audax. It's fearsome only if you are s mite or some other very small bug. They can bite, but don't bother humans unless injured or otherwise terrorized. I think this is a female, but I'm open to correction. She was kind enough to pose on a piece of purple plastic for the holiday.

There are over 6000 species (60 in this one genus) of jumping spiders, so named because they can jump 10-50 times their body length. They make silk but don't create webs. They hunt by, um... jumping on their prey. 13% of all spiders are jumpers. 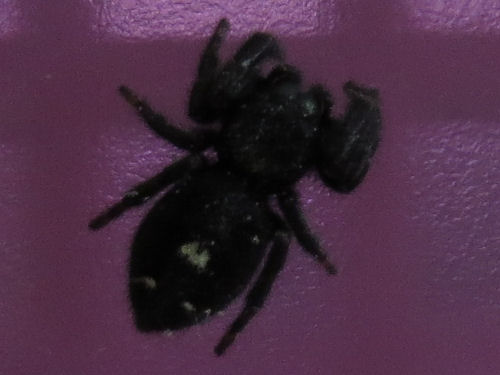 They actually have rather endearing faces with large middle eyes and colorful mouthparts. But I don't think I'd be able to get a picture of any of that without killing the spider. Since she's unlikely to bother me, I won't bother her.

How they jump is rather interesting. Rather than having muscular legs like a grasshopper, they can increase the blood pressure in their hind legs and then suddenly release it propelling themselves forward. When they do so, they spin a silk dragline so they can always return to where they jumped from!

Because of their large eyes, they can see better than many spiders.

Sometimes their spots are orange.

In other news: I wrote in the morning, and formatted in the afternoon. My brain is fried, but I think I have made a choice of software for the formatting. Right now I'm happiest with Word Perfect. Keep in mind that I'm not using the latest versions of either Word or WP. But I believe I've got a clean PDF of chapter 1. When I get one more added I'll get approval from the printer before I go any farther.

And thus we celebrate the eve of All Saints Day. Very interesting about your spider. I enjoy seeing them and let them go about their helpful business.

Charlee: "So when you say 'terrorized' does that include being chased and swatted at by a cat? Asking for a friend."
Chaplin: "Charlee! That weird little bug bit me!!!"
Charlee: "Never mind."