I don't decorate for Halloween, but this handsome living decoration was visiting in my house. 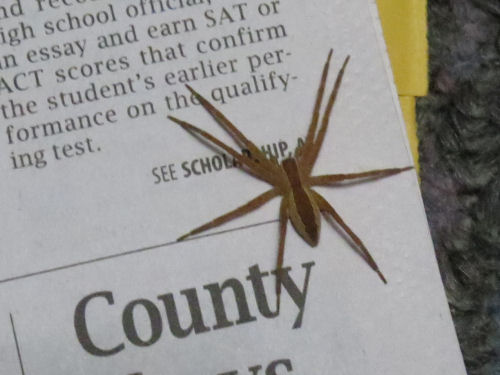 I was uncertain as to the identity... maybe a funnel web grass spider. It holds its legs right for that. Maybe not. The markings aren't quite right for either that or a wolf spider. As you can see it's pretty big. I've never seen one (that I recall) this tan color with a single stripe and no other markings.

A friend has identified it as a nursery web spider, and Bugguide confirms that. Pisaurina mira.


Here's a good Halloween story. Sometimes the female eats the male after mating. The boys, in hopes of preventing this (I guess that means someone is passing along the news. Daddies who survived can communicate this information?), will bring the female a present, like maybe a nice dead fly in hopes she will eat it instead of them.

The males aren't always so nice either. They may wrap the gift in silk, but they may instead wrap a bit of nothing in silk and try to pass it off as a gift in hopes of sex. If the female detects the fake gift, she says "no dice, buddy."

My executive decision was that it and I would be happier if it went outside.

Yes, I would have put that one outside too. I've never seen one like that. I can say with absolute certainty that I'm glad I'm now a male nursery web spider...lol

A handsome fellow. However, let prudence reign. Ejection was the correct decision.

Charlee: "Boys! Always trying to get away with something."