This picture is actually from this summer, but I've been saving it till I had time to do an identification. It's another insect I don't recall seeing. Nothing unusual... this probably says more about my observation of things that can sting.

Good Halloween color, although I saw it in the summer. They could still be out at this time of year, however. They are found across eastern North America. 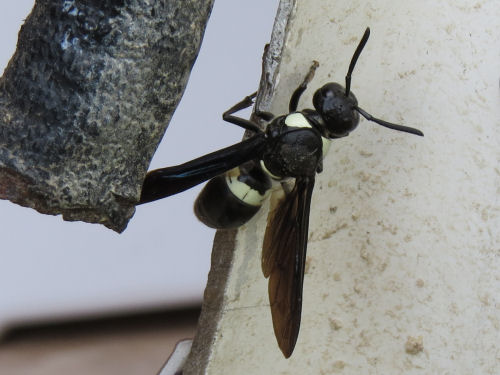 It's actually quite handsome. All my searches for black and white wasp came back with bald faced hornet, but the pictures didn't match. So I went hunting on Bugguide for other choices, and this is a certain ID.

The four-toothed mason wasp is solitary. The female finds an abandoned carpenter bee tunnel, or other narrow chamber (even wind chimes) in which to lay eggs. Each egg is placed in a cell with a caterpillar-- something small, like a leaf-roller. I wonder if the abundance of those I've seen this year is related to seeing the wasp.

So, this is considered a beneficial wasp because it reduces the number of harmful caterpillars. The female can sting and inject venom about as painful as the bald-faced hornet, but the male can only jab you with its pointed abdomen-- about like a pin prick. He has no actual stinger.

My picture isn't really good enough to tell if this is male or female. I tend to be skittish about getting close enough to take macro pics of unfriendly bugs.

In other news: I mowed the entire yard--the last time for this year, I think-- and did another load of laundry. It's supposed to rain tomorrow.

I don't think I've ever seen one like this before.