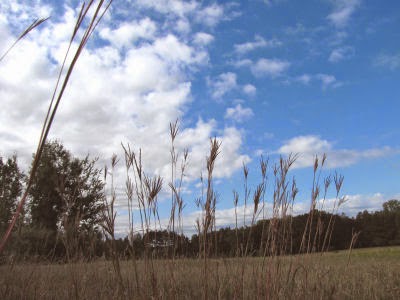 I'm not much of a grass expert. I've learned a little by "osmosis" but if I have time to spend on identifications that need a microscope, serious time, and heavy books, I prefer to spend it on sedges. Nevertheless, there are a few easily identified grasses. 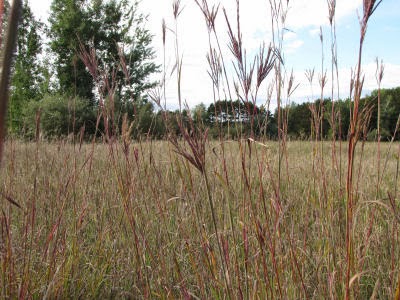 This is one of them, and it is one of the handsomest, AND it grows in my field! It has two common names. One is Big Bluestem. Yes, it's big. Not as big as some grasses, but often 6 feet tall. Mostly the word "big" is relative, because there is a similar grass called Little Bluestem. Is it blue? Well, not blue like the sky, but you can clearly tell that it is a purpleish color compared to the other grasses around it. In certain light angles it does look blue rather than green or brown. 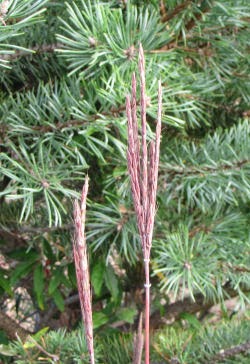 In this picture I've tried to show the head in contrast (that's a Scotch pine behind it). You can now see how it gets the name of Turkeyfoot. In fact if you now look at the first two pictures again, you may see lots of fowl-ish feet raised to the sky! And finally, in the picture below I tried to show what the whole plant looks like. Early in the season that circle of softer, light green grass at the base will start to grow. It doesn't look anything like the two features I just described. But once you get used to what to look for, it's easy to spot. Along about August, it will send up the tall stalks from each clump, and as the year ages, so will the color develop in the heads. 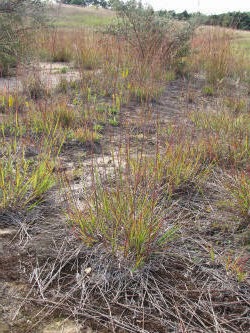 This is a native prairie grass. Although most of Michigan is not prairie, there are some pockets which are considered such. My backyard is not one of them, but my point is that it's not too unusual that it would decide to grow here. Lots of people pay money to get this grass onto their property. I just enjoy that it is happy here.

I like the turkey foot name. I've heard of this grass but never seen it live and in person. Prairie Potholes are on my "to do" list. I plant native grasses at my house for landscaping and do love them. Thanks for sharing.

ha!ha1ha! they do looked like a turkey foot!..you're lucky to have field for all these grass and wild flowers and trees to grow.

glad to hear you are enjoying each of them...

have a lovely day!

Julia- the Prairie Potholes are to die for. Make sure you hit ND in a wet spring and summer and you won't be disappointed.

Hi Tes- Yes, I am very thankful for all the space that I have around me.

Big Bluestem is a very beautiful native grass - one of the big 5 of native prairies. We offer both seed and plants at our native nursery. http://www.ionxchange.com/order_pages/andropogon_geradi.htm
Howard Bright
Ion Exchange, Inc.

I have been wondering about a certain type of grass recently too. I'm glad you posted this. It gives me the thought that I can figure it out eventually.

Grasses in general are pretty tough to ID.. A few stand out from the crowd, but it goes off a steep cliff rather quickly. I hope to get a few more common ones under my skull, but not the whole pack.