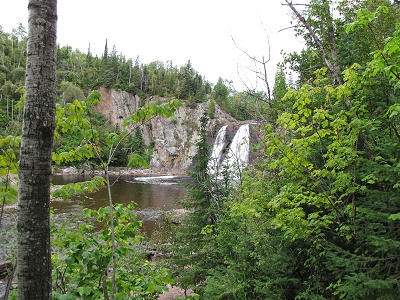 Nearly 48 hours of rain made us and all our gear wet and somewhat less than cheerful, but it made the rivers of the North Shore of Lake Superior spectacular. It was hard to choose only a few pictures to show you, but these are the ones I selected. The one above is the Twin Falls on the Baptism River. Very scenic, but the Baptism River kept the trail at arm's length. 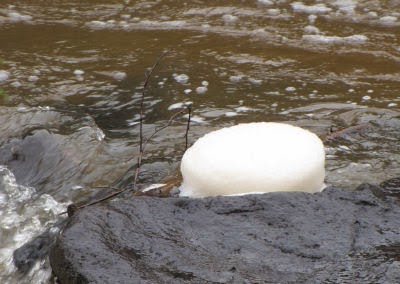 The next day we reached the Split Rock River. It was my favorite. There were cliffs, and rock formations, whitewater, and flat water. We ate our lunch on a rock projecting into the river. But I chose to show you this foam "pill" that the currents had formed in an eddy. It was about two feet across! The picture below is the opposite shore from where we ate lunch. I like the blocky cliffs and the vertical trees. Just outside the picture the water was white and roiling. Recall that the story about the merganser ducks riding the rapids was on the Split Rock River. 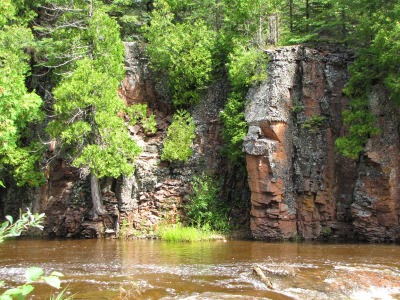 A couple of days later we reached the Gooseberry River. It can be just as wild as the first two, but it had now been several days since the rain, so it was calmer again. On this day it was a river with places one could play and explore. This boy was enjoying the day with his family, and who can resist rocks and water on a warm day? 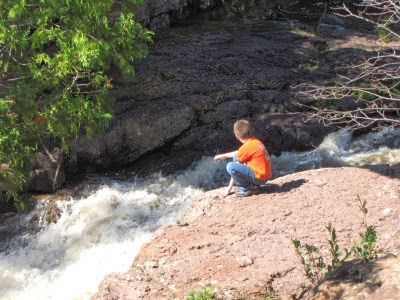 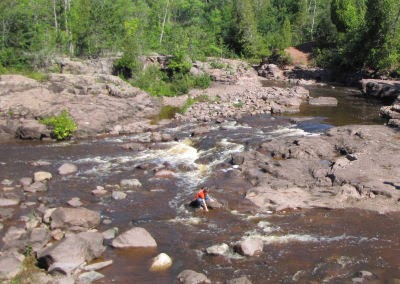 I think tomorrow I'll share some fun closeup details from the hike. Then maybe it will be time to bring the posts back closer to home!

Lovely! And that foam "pill" is neat!

That "foam pill" made me stopped and read what happened :P
Nice adventure you have there Sharkie :)

Very nice. looks so Peaceful. the pill foam is amazing. At first it looked look Ice.lol

Jennifer! Nice to see you.

Vanilla- I am honored to have you stop by.

Auntie E and all- It's amazing how the river can shape such truly round wads of nothing but air and some particulates!

I thought the foam pill is ice also..Beautiful water views!

I really like seeing rivers and waterfalls. These are all absolutely beautiful. I only see mini versions of all this stuff on my hikes.

Hi Icy- It's interesting to me how everyone likes that foam pill. This one is larger than most that we've seen. Once we saw one that was shaped like a cone, and even larger. But there has to be some place that really catches and swirls the water for a long time for them to form.

Ratty- yeah, SE MI isn't known for waterfalls! Take a tour in the UP sometime. Lots of easily accessible and lovely ones.- or, hey... hike the SHT and see these for yourself!