More Tracks and a Ducky Promise 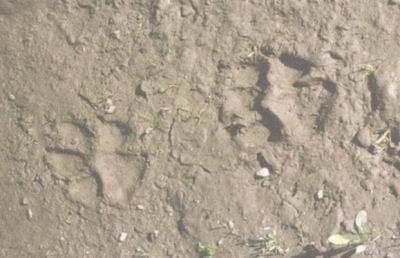 After yesterday's post there were some comments about what I believe was a wolf track that I'd like to discuss, and compare to the cougar (mountain lion) tracks shown today.

I'm very certain that the track shown yesterday is canine. The nails show, which would be unusual for a feline track unless it were trying to keep its balance or something. The shape of the pad is also very canine.

There was another question about why there was only one single print. The answer to that is simple, but I didn't explain it. There was only one soft spot in the dirt of the trail that would take a print. I suspect that the animal was walking right down the trail, but it only stepped on that soft spot with one foot.

The cougar tracks photos shown here were taken in the western Upper Peninsula of Michigan in 2005. The DNR refuses to admit that there is a cougar population because then they would have to manage it. But all the local people we talked to said that everyone knows they are there. I didn't have the sense to put my knife down beside the cat tracks, but they are larger than the canine track! 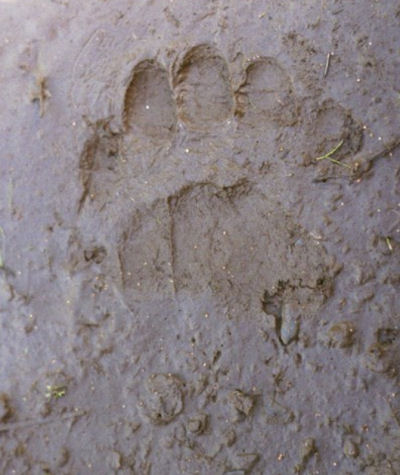 Here's another cat track from the same series. Note that the cat had five toes on this foot! You can also see that the pad isn't the same shape as a dog track. The picture below is a print from the same foot, but in a muddy spot. The cat still didn't really extend its claws, but you can see that it was flexing them a little from the more pointed ends of some of the toes. 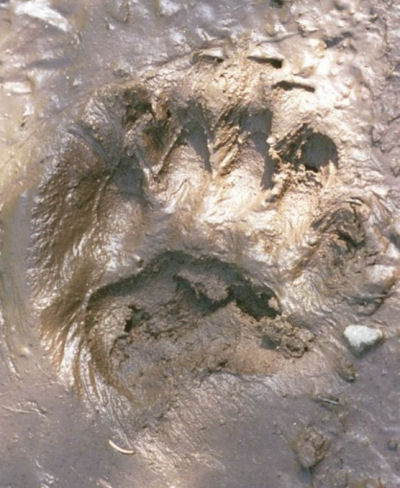 Oh, and the promise? Tomorrow, I've got a funny, ducky story to tell!

This is very interesting to learn. I would probably walk pass these foot prints without a thought..

I love the mystery of footprints, my imagination runs wild.

Ooooh, I like the footprint posts. Have you found any odd things lately on your hikes?? You know, like bag and fish??

Icy- It's always interesting what people watch for. I'm looking down for plants and tracks, my friend Irene is always looking for trees and birds.

Glynis! Long time no see. It is a mystery, isn't it? Where was the animal going? What was it doing?

Lin- no bags with fish, but three crazy ducks are today's offering.

We saw some tracks this morning too! But no mtn lions. They are so stealthy that even where they are dense in population, like where I live, they are rarely seen.

This is very interesting. I like looking at the tracks I find to try and discover what they are. Finding a big feline track where I am would throw me for a loop.