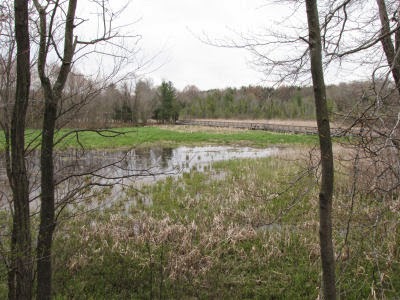 This has to be one of the best birthdays! Ellen took me to a small county park called Gale's Pond. We were both very surprised that I hadn't previously known about it, but this was my first visit ever. It was a former mill pond, and the property was donated to the county in 1939 for a park.

More recently, Michigan Recreation Trust Fund money was obtained to build the boardwalk you see on the right side of the picture. The trail encircles the entire pond. There are numbered signs which must have an interpretive brochure but there weren't any in the box. Ellen and I made a game out of trying to decide what each post was supposed to mark. 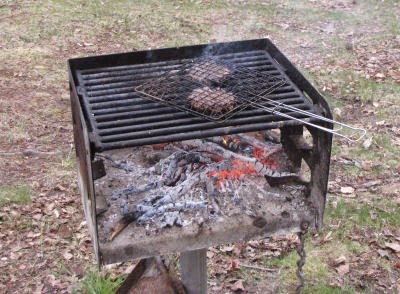 Rain was predicted all day, but except for a few showers before we headed out, the day was only gray, and very comfortable. The little park had a grill, and we had no trouble building a little fire to cook some hamburgers. I took a bean salad, and Ellen brought pickled asparagus and brownies. That was a feast good enough for anyone!

The trail was short, so we walked it three times, and also a very short nature trail that was around the corner, and built by Boy Scouts. We saw SO many things! I think I'll share some birds today, and save the plants for tomorrow. It's supposed to really rain tomorrow, so I may not get outside.

Redwing blackbirds love places like Gale's Pond! And it's spring, so these two fine fellows were trying really hard to attract the attentions of the various girls in the neighborhood.

When I was a kid, we learned to identify their song as "Ok-a-lee, ok-a-lee, joy to you in the spring!" However you remember what they sound like, they were sure singing it today. And their efforts were not going unnoticed. 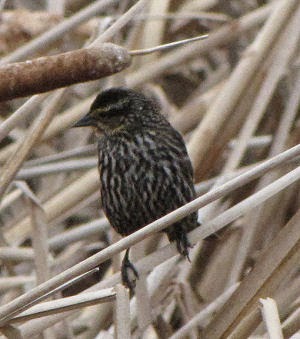 Here is one of the potential Mrs. Redwings. Ratty had a much better picture of one at Female Redwing Blackbird, but this one isn't bad. 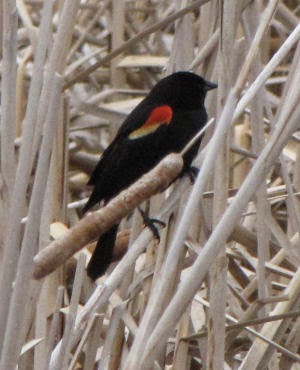 This is the first suitor stating his case. 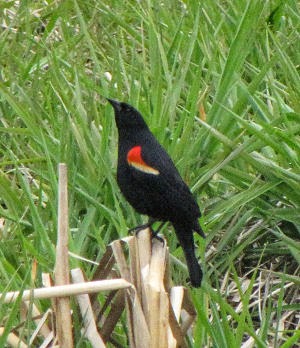 And here is number two, waiting for his chance to impress. They were a lot of fun to watch. They are so ordinary here, that it's easy to overlook them. I do have to admit to being a little more excited about catching the last picture though. It's not great... you can't see the bird's head. But it's the first time I've ever gotten a picture of a great blue heron in flight! 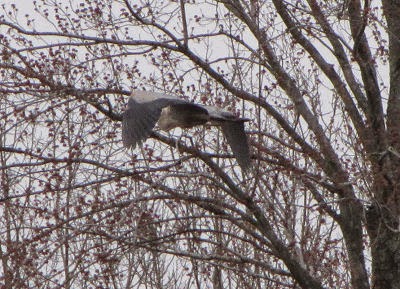 You have collected your pots of gold. Congratulation, on your birthday?

It sounds like a wonderful birthday celebration. Love those redwing blackbirds. They are so pretty. As for that last shot I think it's pretty good. What a wing span

Happy Birthday! I like your heron and redwing blackbirds. Our female rwb's dont get so interesting looking. They are much more uniform in coloring. Must be geographic differentiation!

Happy Birthday, glad you enjoyed yourself. Love the redwing blackbird, looking forward to seeing the plant goodies you saw.

Happy birthday!!! Seems like it was an ideal celebration.:)
Such pretty birds. I love the splash of red on them. And the "ok-a-lee" must be a very happy sound to hear.:)

It looks like you really did have a good birthday. I really like your blackbird story. Red-winged blackbirds are so interesting and fun to watch. Those herons seem like they're moving slow, but they're hard to get on camera while they're flying. I had a chance to get one too, but I wasn't fast enough.

rainfield- I am rich indeed!

Ann- Those herons are pretty big... wish I could get a good shot of a sandhill crane. They even dwarf the herons.

Julia- that's interesting about your female redwings. I think there are a lot of regional differences in birds, but I'm no bird expert.

Carol- I'm really behind on the plant postings. We'll see what happens this week.

Hi Ivy- the redwing blackbird song is often the very first sound of spring here. They usually come even before the robins.

Ratty- I've been chasing a lot of birds this week, and missed almost all of them. Two sandhill cranes flew past my kitchen door this week, and I couldn't even have gotten the camera in my hand fast enough, let alone turn it on and point it.