The Secret Pond and an Amazing Turtle

I managed to get quite a lot of things done today. I finished getting all the personal invitations to my "end of the NCT hike" written, so they are ready to mail tomorrow. I got my hike spreadsheet up to date and verified. What with a few little errors and one that I knew I needed to fix, my official mileage to date is 4078.

So, for all of that, I rewarded myself with a hike in the Nordhouse Wilderness. I need to be hiking with my big pack for more than an hour at least every other day, anyway. It was a gray and chilly afternoon when I started. There were no ducks on the lake today.

I hiked past the lake and took a different trail. It's one I've never been on, but it's an old, old road that runs east to the real road at the eastern edge of the Wilderness. I followed it, but there were a lot of trees blown down. We have had bad wind storms here in 1998, and again a couple of years ago. I had heard that Nordhouse sustained a lot of damage in the 2008 winds, but I hadn't seen it until today. 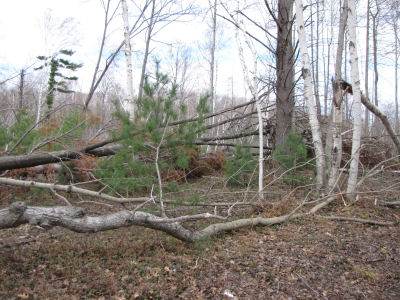 I made it about a half mile on that trail, climbing over and walking around big trees, but I could still find the treadway. Then it pretty much disappeared under stuff like what you see above, which just went on and on into a swampy area. But there was this lovely little pond. I don't know if this actually has open water all year, but it might. I know it's not really a secret, but it feels like it-- I was out there all alone before the time of year when a lot of other hikers show up. And that isn't a well-used trail either. 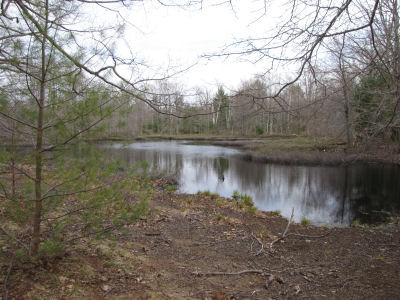 The trail went up along the left side. Then... on a log across the narrow portion, I saw this. 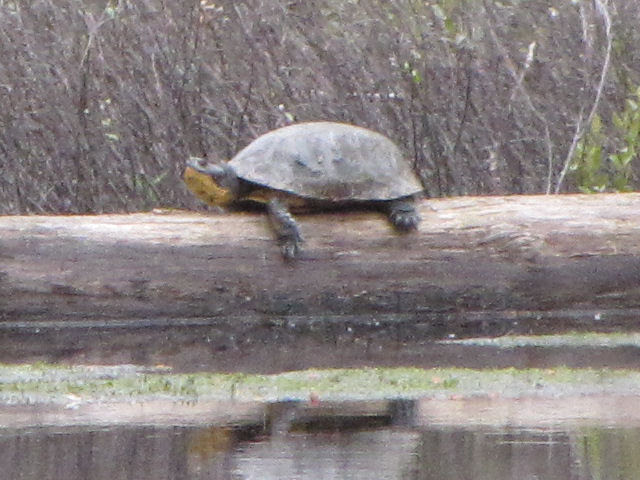 First of all, if you know woodland turtles, you will notice right away that this is a really big one, whatever it is. I've seen a soft-shelled turtle that large around here, but they don't look like this. With the high dome on the shell it looks more like a box turtle, but they don't live in the water. And of course, while I was trying to sneak closer to this one, the turtle noticed Maggie running around and slid into the water. I got a few pictures, but couldn't sneak close enough to get a nice crisp one. 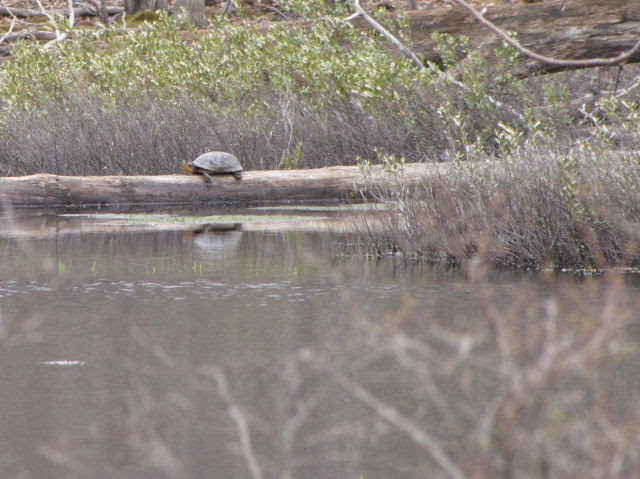 But I still couldn't see enough details until I came home and put them on the computer. Now we get to the amazing part. This is a Blanding's turtle. They are scattered around the upper midwest, and are of special concern in Michigan. Not only that, the largest one recorded is 10.75 inches across. This one has to be close to that size.

The shell should be lightly spotted, but I think it's covered with mud. The reason I'm sure it's a Blanding's turtle is that bright yellow chin. That has to be what it is. I'll be calling my favorite forest ranger tomorrow to tell her about my find!

Anyway, the trail was completely blocked ahead. I'll have to go back another day and hike in from the east side. I tried taking another trail that goes south, behind the bigger Nordhouse Lake, and out to the entrance road. But it was completely blocked too, and I didn't feel like fighting my way through the mess with my big pack on.

But it didn't matter. By the time I was back at the car the sun was out. I got in a good practice hike. Maggie was more energetic than I've seen her in a long time, leaping over logs and running down the trail.

I love the Turtle, we do not get them here apart from dumped pets, we have a large terrapin/turtle in the big lodge that evades capture.
We still have tortoises/land turtles again millions of these were imported in the 60s, thankfully this is now controlled, they are still kept as pets - I love these dinosaurs.

the turtle is trying to get across..

Never know what you may find on the trail.

it sounds like you and Maggie had a good day. What a great discovery you made there with the turtle. too bad it didn't hang out for more pictures.

That turtle is super cool looking!!!

I just wanted to reply to your comment on my blog. A yarn bomb is knitted (in my case) or crocheted graffiti placed in any public place. If you search the term, you can find dozens of pictures of other peoples work in other places around the world.

I love turtles. I can see that it's a really big turtle by the way it's draped over that log. I think it was your prize for a good hike.

love your blog, love nature too. so cool. hope you visit me here http://selinatankersley.blogspot.com/2010/04/its-fast-now.html

wenn- looks like it doesn't it? I think he was just sunning.

Joe- I know! This was special.

Ann- I'll have to go back without the dog if I want to try again.

Thanks, Nicole- feel free to stop by any time!

Ratty- it was a real prize! I even made the forest service people sit up and take notice.

Thanks Selina- I will stop by.