I think my red squirrel is a morning person. As soon as the sun was up he was racing from the roof to the deck railing, round and round in a circle, kicking up clots of fresh snow as he went.

I've given up spraying him with vinegar water. He only cares if I really get him in the eyes, and then he just sits there and rubs his eyes and looks at me so sadly. 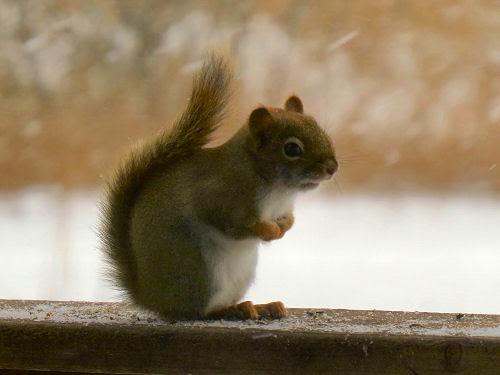 What am I going to do about this little guy? I think red squirrels are one of the most adorable animals on the planet, but if he manages to get into the house it could be a terrible problem. And I can hear him chewing on something that sounds structural, up there in his haven under the deck roof.

At least the blue jay will chase him away from the feeder, so he isn't hogging it all the time.

You'd never believe how much noise he makes going across the edge of the house roof that is under the deck roof. It sound's like all of Santa's reindeer coming in for a landing.

Good old live trap and a LONG drive to drop him off! Squirrels do NOT belong in a house!

I vote for live trap but good luck.

I vote for a live trap too. I used to routinely trap squirrels with a Havahart squirrel trap baited with peanut butter. Eventually I realized that there were 100's of squirrels in the yard and the effort was hopeless.

I don't have a squirrel problem but I did have a wood mouse problem in the old 16ft x 10ft chicken coop, it is double lined with a two inch gap so you can imagine the living space for these adorable monsters, the last last of our cats died 10yrs ago and the problem escalated, Meg is no use at catching mice, I bought a couple of live traps and each winter (giving them time to look to their young) I open the traps and everytime I catch one it goes on our morning walk with us and we find it a home in the woods.

Looks like you've got a real problem. I hope you can solve it well. Red squirrels are the cutest little things, but also the most mischievous.

He sure is a cute stinker.

It sounds that it behaves like a monkey over here.

Doesn't he fall into the "Adorable Nuisance" category?

He's a cute guy. Hope he doesn't decide to do some damage

My mother, in GA, had a squirrel problem as the duplex in which she lived was built, along with seven others, in an old pecan grove. Of course, the squirrels loved the nuts.

One got into her attic crawl space and died and that was ungodly. It took weeks to finally eradicate the smell.