Agatha Christie Made Me Do It


I'm a day behind because I didn't get a post done last night after I got home from a play and before I went to work.

I went to see the spoof "Agatha Christie Made Me Do It." This is the exact opposite of "Buried Child." It's just a light, fun play that pokes fun at all the formulaic mysteries of all time. It was really cute. We weren't supposed to take pictures (usually, they just say no flash), but I snuck one for you. 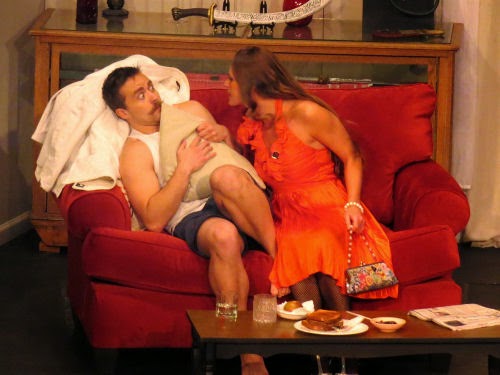 The young man on the left wakes up on a Tuesday morning to learn by various means that he's married two women and wrecked a night club on Monday. He can't remember Monday at all. At the end of Act I, his business consultant is murdered. But by whom, and why?

The play was written in 1975 by Eddie Cope. It hasn't won any awards, but sometimes you just want a simple laugh.

From your title I thought you had got yourself into trouble :)
Sounds like a fun play

Just 'cause critics don't care for it doesn't mean we can't. Or as mother used to say, "Everyone to their own taste said the old lady as she kissed the cow."