Now we were moving farther away from our camp each day, and putting the cars out took longer again, but even so we were hiking at 10:20.

This was our last day in the AEP lands. Those last two off-road miles were characterized by small steep hills with little creeks between. We crossed Onion Run, the collective for the un-named streams, twice while still in the woods. And we crossed a lot of the little trickles. No big deal, but think down and up. 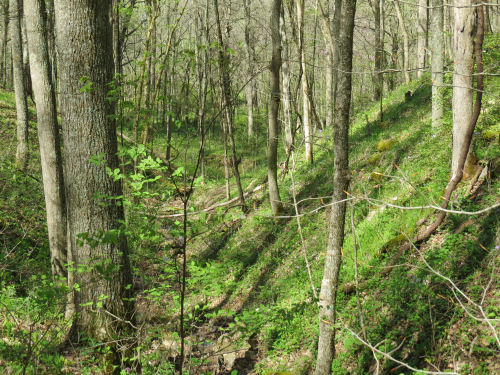 When we reached the road we were to join at the end of the AEP property, it continued along Onion Run. The day was heating up, and we were glad to sit in the shade beside the stream for a rest with the cool air rising from the water. 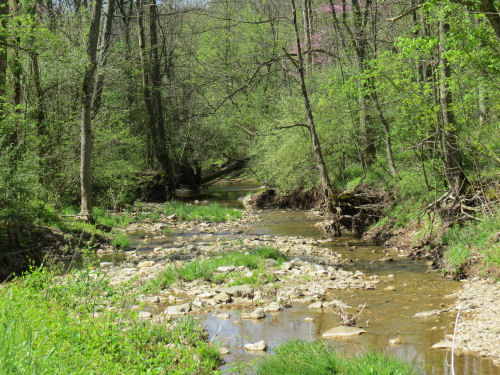 In fact, we crossed Onion Run three more times on road fords. These seem to be characteristic of southern Ohio on streams that are generally small. I suppose the protocol is that people know not to drive through if the water is really high. 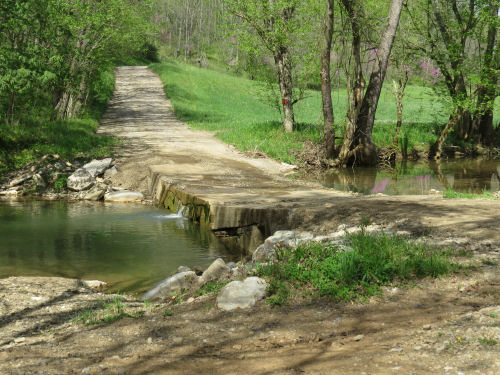 I also found it amusing that although this seemed to be one of the most primitive roads we walked, it was the only time on the entire trip when I had 5 bars of service on my phone. Must have been a tower nearby!

Here's an oddball sighting. This tree stump has "stuff" oozing all over it. I think it's a Gelatinous Woodcrust fungus, but am open to correction. 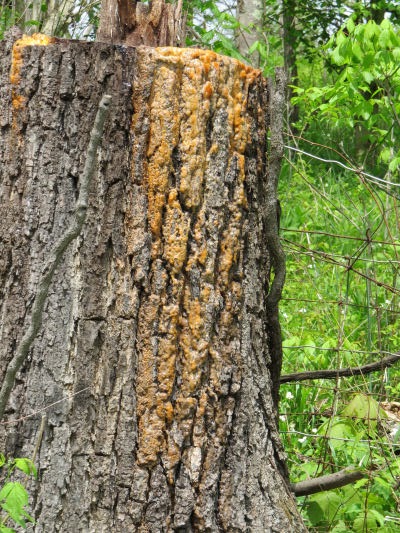 Want to see that closer? Too bad if you don't. 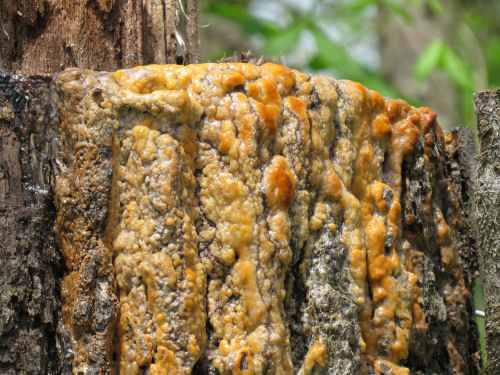 All those valleys close together means there are multiple streams through the area. This road bridge was a picturesque way to cross Meigs Creek. 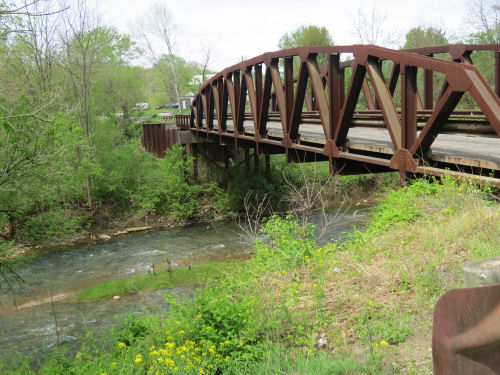 We turned right just across that bridge and crossed a non-picturesque bridge on a state highway over Perry Run. At that point we reached the lowest elevation of the day. Read largest waterway. Also read, next thing we did was go UP. And I do mean up. (But, even so, it was not the steepest climb of the hike. Stay tuned till tomorrow.)

The next three pieces of road were goofy. At least on the map. There are no roads (or trails) that go over the next two ridges. So we walked west around a "toe," then back east for a mile around the next toe, then back west three miles till we could join a road going south. Forward progress, maybe a mile as the crow flies.

We saw this cooling tower and assumed nuclear plant, but learned later that it is a large coal-fired power plant operated by AEP. 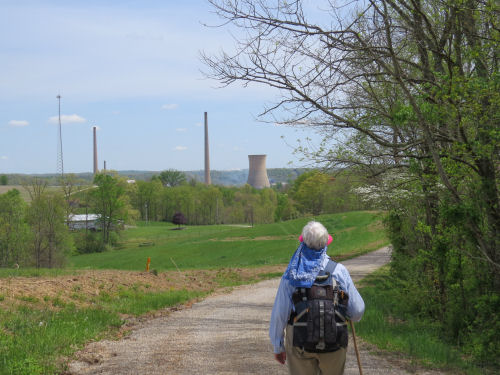 Our final mile of the day was a gentle walk along Olney Run. We were glad of that. The day had heated up to 86 degrees, and we weren't used to those temperatures yet! There were little rills and waterfalls. We enjoyed watching one during our final break of the day, although we didn't go to the water as all the access was through poison ivy.

The ivy was our biggest enemy on this hike. It was at the deadly invisible stage where there are three folded maroon leaves on a 6-inch twig. Unfortunately, this stage is extremely virulent so we have to be vigilant and wash often. We were either careful or lucky because neither one of us got more than a few dots. We consider this a major success. 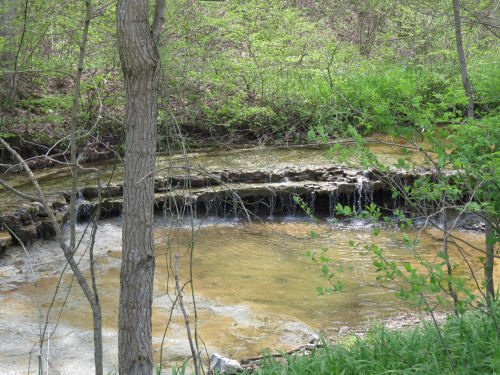 We reached the car at 3:15, and this turned out to be our longest time. I think it was due to the heat which made us decide to take that extra afternoon rest stop.

Wednesday, April 26. Stockport map, points 5-12, 10.1 miles. Trip total at this point, 53.8 miles. We also passed the junction where the now official southern end of the Wayne NF loop comes back to meet the Buckeye Trail. But I had to walk a bit farther to complete the trail where I had veered off to the east.

Posted by Sharkbytes at 9:39 PM

Interesting oozing tree stump. I couldn't tell if you were right or wrong on your identification since I don't know one from another