Let's start the flowers with the bright colors at the opposite sides of the spectrum-- bright red and deep purple. I've only ever seen these flowers in southern Ohio, and I always look forward to finding them when I'm there in the spring.

Red is the fire pink, Silene virginica. It's a member of the carnation family, the same genus as our common weed, campion.

It's pollinated by ruby-throated hummingbirds, which are attracted to the red color.

Fire pinks apparently will grow in southern Michigan, but it's considered threatened.

Deep purple is dwarf larkspur. It's actually a delphinium, which is actually a buttercup relative. Those deeply lobed leaves do look a lot like swamp buttercup!

You can see that spur, sticking up from the back of the flower. That's created by fused sepals. The color and growth form are similar to monkshood, but if you look for the spur, you'll be able to easily distinguish them.

I'd only ever seen a few of these at a time, in other years. This trip we saw huge patches of them. Sometimes they were mixed with wild phlox, for a lovely blues-tone wash on the hillsides. 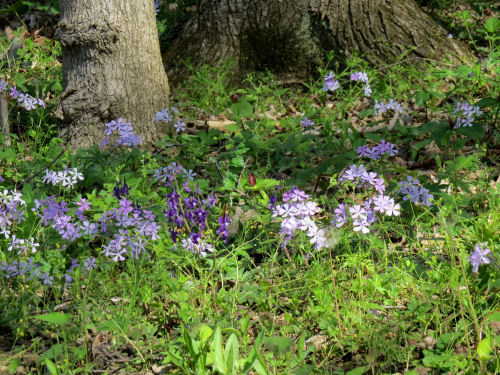 It takes some time to do the wildflower posts because I'm trying to also add them to my nature photo page.

Those are beautiful flowers. I particularly like that deep red.