Couldn't Put it Down


There aren't too many books I read any more that I find compelling. I still love to read, but now that I'm "really" a writer, I've also become a critic. That has it's drawbacks.

After I finished the previous blog post, I thought I'd read myself to sleep with the book by Judy Updike, Broken for His Glory. Ha! Stayed up most of the night reading and then had to go to work half asleep in the morning. As soon as I got home from work, did I take a nap? Heck, no. I finished that book. 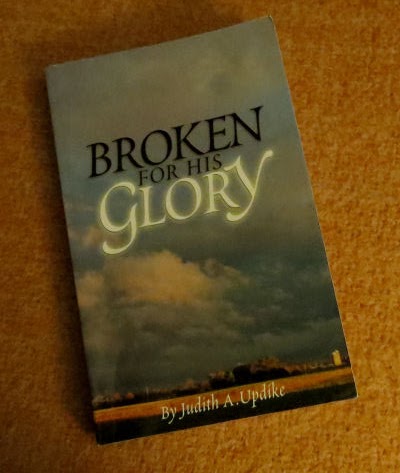 To be truthful, I'm a little too close to the story to be totally objective. Judy and I grew up in the same church. I remember the folds of land at her farm, the roads and houses. I know most of the people in the book. That said, these events happened after my mom died in 1995, and I haven't been back to that village more than a couple of times since then.

Judy's uncle Harlan was our pastor until I was 10. He had a dry sense of humor that I was just beginning to appreciate at that age, but he was always gentle and caring. Her aunt Rachael filled many roles (as pastor's wives often did) but I remember her most clearly as the leader of Junior Church. Thinking back from an adult perspective, I've realized what a gift she had, because the church was small and all the kids from preschool to 5th or 6th grade were thrown together for about 40 minutes. She handled them all with skill, and learning occurred despite the huge age range.

This picture was in 1958, the year they left our church. 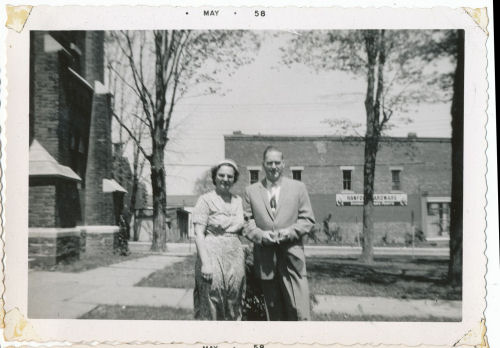 They later came back to the area and were good friends with my mother in retirement years. Here they are again in 1983. 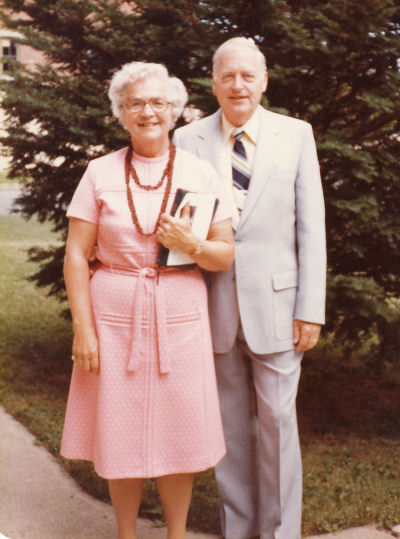 I'm sorry that I don't have any pictures of Judy's parents. Her dad was quiet and probably avoided pictures (at least at church), but her mom, Dorothy, was a Sunday School teacher, and VBS teacher. She taught 5th grade SS for so long that it was just a given that you had Mrs. Updike in 5th grade.

Judy was ahead of me in school. But we both played field hockey. Even though this was long before Title IX, because New York required physical education, there were at least some interscholastic sports for girls. That doesn't mean we got any respect. Haha. I just went through all the yearbooks from my highschool years, and the best field hockey (any girls' sport) got was an unlabeled snapshot or two. I loved field hockey. I called it blood and guts for girls. 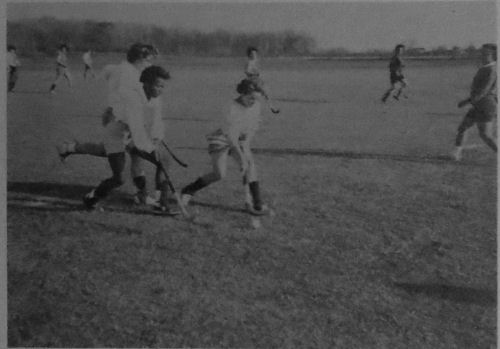 But Judy loved it more. She went on to play in college, and then she became a phys ed teacher and field hockey coach.

As I said in the previous blog post, we weren't close friends. I suspect we were both too busy being shy and trying to figure out where small, extremely independent girls fit into the world back then. But I apparently worked up the courage to ask her to sign my yearbook. I was such an outlier on the fringes of the social world that it was a major accomplishment for me to make such a request. I was always afraid people would say "no," (some did) or write something unkind.

I haven't seen Judy since around 1965. But Facebook is great for some things, and we've reconnected. As it turns out, as adults we've enjoyed a lot of the same kinds of activities. 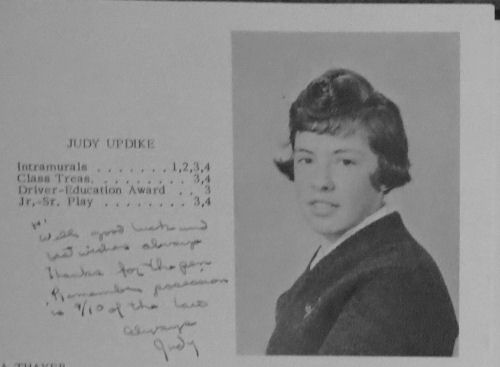 Anyway, enough of the reminiscing. My familiarity with the people and places may be the reason I found the book so compelling. Nevertheless, this is a book that is sure to resonate with anyone who has found themselves at the end of their physical and emotional strength while caring for the needs of people they love. Beginning with a critical and eventually fatal injury of her oldest brother, through the deaths of her uncle, mother, father and aunt, over only 17 months, Judy shares honestly how these events took her to the end of her own strength. Her faith was tested in ways she never expected. Yet God always upheld her. She learned that the roller coaster of emotions is a separate "thing" from faith- not everyone gets that.

Her smile? Pictures I see of Judy now show an even bigger one than back then. Mine too, I hope. God is good.

If this stage of life is heavy on your heart, or looming in your near future, I highly recommend Broken for His Glory. It can be ordered from Higher Ground Productions, 771 Turk Hill Road, Fairport, NY 14450