It's getting really late in the season, but we finally have a bit of color showing up. Took this on the way out of the driveway this morning. The red is staghorn sumac, and the yellow is grapevines covering everything. I really should cut those down, but I could spend at least four hours a day just doing upkeep on the plants and supposed gardens here. Not gonna happen. 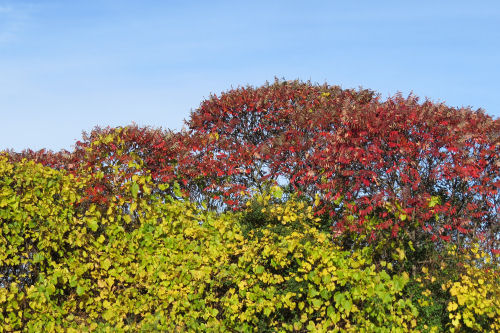 But the best is that wonderful hybrid cherry tree on the other side of the railroad tracks. This is the tree that has been occasionally used on logos or ads for this blog. It's also the tree that took so long to identify. It is apparently some sort of cross between a commercial and wild cherry. Anyway, definitely some cherry.

I thought I'd lost it this summer in the fire. Some tree went up in a towering blaze. I couldn't tell what tree with all the smoke, but it was just about in the same place. My heart sank, because I love to watch this tree go through the seasons. But after all was under control I realized the fire was on our side of the tracks and this tree is on the other side. (Which of course, means it's not my tree at all. I just hope the owner never decides to cut it.) 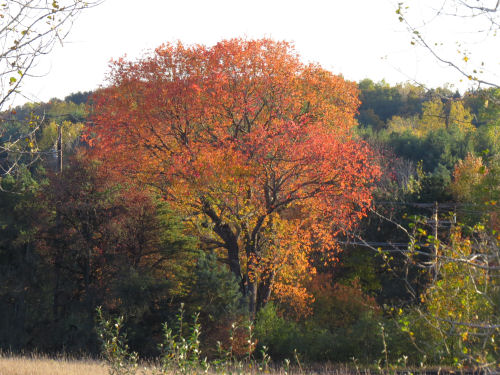 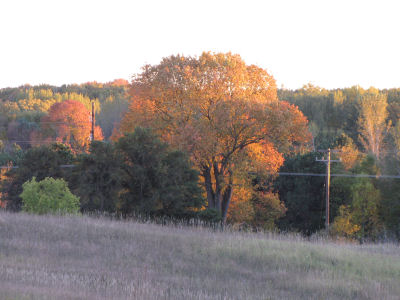 I like today's better. I want you to know that ever since that day in 2010 when the tree glowed like that in afternoon light, I've been hoping to have another afternoon like that. This is the first year that it's had such good color since then!

Accountability report:
Worked all day. Came home and worked on the trailer till dark. Spent almost two hours on the phone with various people. Not my favorite activity, and it put a fatal damper on writing. Also made a potato soup in the crockpot that wasn't so good. I don't have to keep that recipe.

Yep I like todays picture better too. Its kind of strange here where some spots still look really green and others have trees that have lost 1/2 their leaves already