I Used to Have Nice Plants


I had big plans and worked hard on developing a nice flower garden for quite a few years. Then it all went downhill. For one thing, I'm continually battling really lousy soil. It's more like pure beach sand. Then there are the critters: deer, woodchucks, rabbits are the most devastating to flower beds.

Then along came 2009... the year I decided to hurry up and be the first woman to hike the entire North Country Trail. I did no garden care at all in 2009 and 2010. I've never been able to give it the time required to recover from that neglect.

Then there's the expense. You don't have to be rich, but you do have to have at least a small budget, and I no longer had room for it in my wallet.

I've now made a monumental decision. But first... just a few goodies that managed to bloom this year among the weeds. First a couple of iris. Nothing spectacular, but nice. 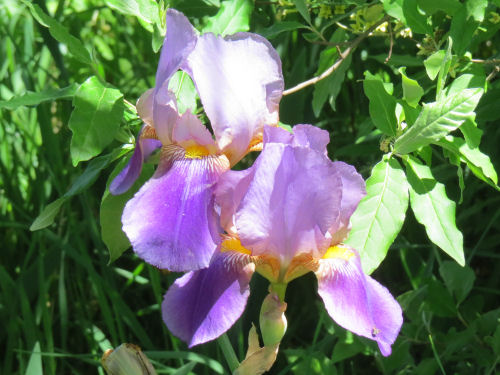 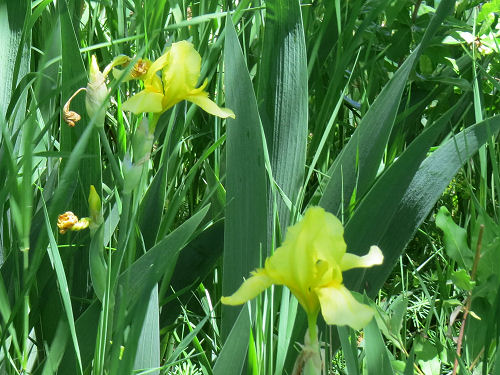 I thought I had showed you pictures of my rock garden when it was at its finest. But maybe not. Can't hunt up those pictures tonight. That was around 2001. It really was lovely. I spent half an hour a day weeding, all summer long. I had a $100 a year budget, but I also liked digging up odd plants I found, or getting gifts.

Anyway, here's one plant that has been too hard to kill, despite all the grass that's trying to get it. It's a pink bush geranium, variety 'Bloody Geranium' for the dark red leaves in fall. See link at end. 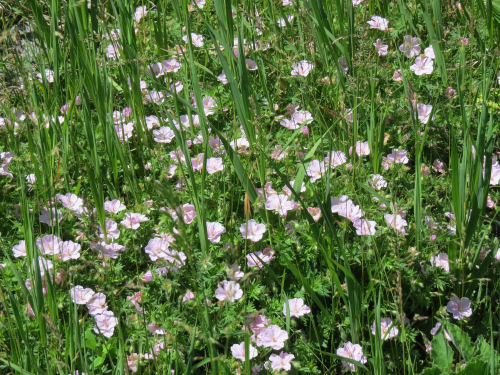 Finally, here are two varieties of Dianthus, sometimes called Sweet William, or pinks. Neither one is growing in the rock garden any more. They were probably a poor choice to put there in the first place because although they are a perennial, they self-seed, and they kept moving themselves around. This variety is called 'Brilliant.' I haven't seen any for a few years. This year, there's a patch in the lawn. I mowed around it. They look lots better than the weeds we mow and call a lawn. 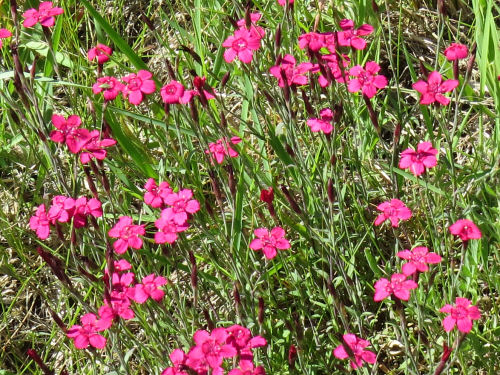 I was especially happy to see this little gem. I ordered this dianthus from a specialty catalog, and love it, but it was never as prolific as the common ones. In fact, I didn't think there was any of it left. But a couple shot up. This variety is called 'Arctic Fire.' 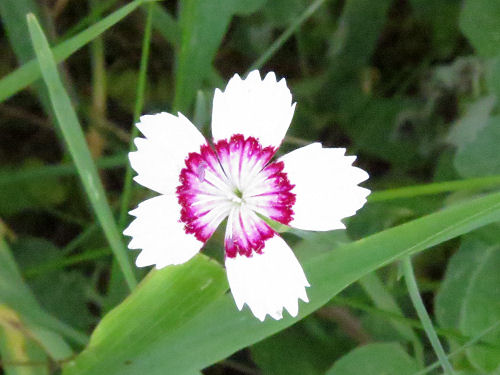 So what's my big decision? I'm not going to play in my horrible gardens here any more. The overall results are too disappointing, and I don't plan to stay home enough to try to reclaim the mess.

I'll go visit other spectacular gardens. Or I'll stroll through other people's messes and dig in the dirt with them. Maybe I'll end up volunteering a bit in some public garden.

Of course, seeing these plants try so valiantly to bloom and live makes me want to just go spend hours weeding and digging and hauling... and then no writing happens and I didn't accomplish enough in the end to make a difference in the gardens anyway.

And what's the next step in this plan? How about a big public garden tomorrow? I'm going to the Michigan Outdoor Writers Association Conference, and one of the day activity choices is Dow Gardens in Midland. Stay tuned!

In other news: I did a lot of stuff for the Writers' Rendezvous. I did some work on the Long Distance Hiker Recognition. I did a LOT of errands. I'm about half packed. Gotta get back at that. I leave at 7 am. No writing happened.

This sounds like my garden. I've given up. It's much easier to enjoy the wildflowers in the park...

I gave up on gardening. I'm not good at it and I hate the weeding. What continues to survive will remain until they too abandon ship.

I really liked that first iris. Then I saw Arctic Fire. Spectacular!

Totally empathize with your experience(s), Joan! The chartreuse Iris are dazzling & Secondary Roads picked the perfect word for the Arctic Fire dianthus :D We, too, 'mow around' any pretty thing coming up that looks better than the "weeds we mow and call a lawn" (LOL on that!!) Hope you enjoy safe, productive travels :)