I'm too tired to do a long post, so I'll just tell you about the interesting hawk encounter yesterday. There was a whole lot of screaming going on, so I knew there was more than one red-tail.

There were two, and they were divebombing each other, trying to knock the other one off the top of the utility poles. Was it two males vying for territory, or a love song? I don't know. I caught several action shots of half a hawk. Missed some that would have been pretty cool pictures.

The best I could get was one screaming. 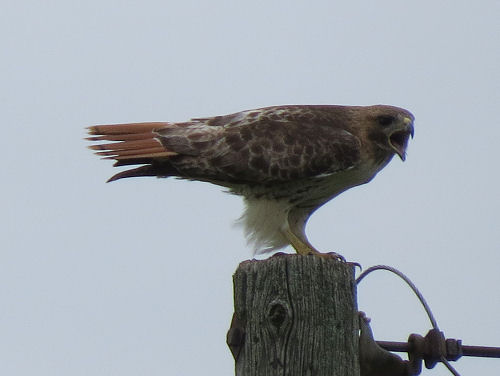 In other news: It's all other news. I spent the morning making some new promotional materials. Spoke with a book club in the early afternoon. Met with someone who wanted writing advice after that, and then had writers' group this evening. I'm bushed. Bed is coming right up.

That must have been quite a show the hawks put on. Nice shot of the screamer.

Ann and Chuck- It was pretty amazing. They finally flew out of camera range and a kingbird decided to get in on the fun too, chasing and pecking at one of them.

hello sharkbytes its dennis the vizsla dog hay hmm wel as the faymus minstrel florence + the masheen wunse sayng a kiss with a fist is better then none!!! maybe that appliez to a kiss with a klaw too??? ok bye