Lost in a Puzzle

Today, you get nothing except a puzzle, although I actually finished it yesterday. Someone gave us this, but I had never put it together. It was supposed to be hard. It was. But fun hard. 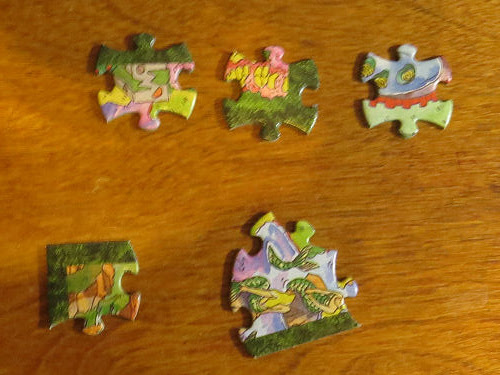 The goal is to create all the little diamond-shaped spaces (mostly- a couple are elongated into rectangles) that have hedges or walls all around them. The things in the squares are sort of a fantasy motif. There is all kinds of stuff! Bridges, statues, sea monsters, mermaids, fountains, fantastic buildings, sheep, horses, ducks, swans, flowers everywhere, gargoyles, etc. The pictures are very small and fussy. Here is one with a sea monster in a pool. 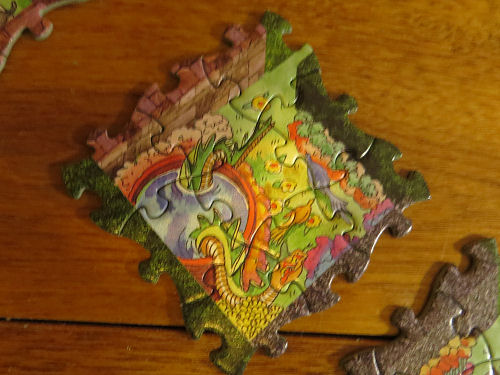 Here are some edge spaces, and those are all triangular. I was able to tell which corner the triangle attached to because of a shared orange flower, and one square because of the brick wall. These have one of the weird buildings, a fantasy-style boat, and a pool full of mermaids. 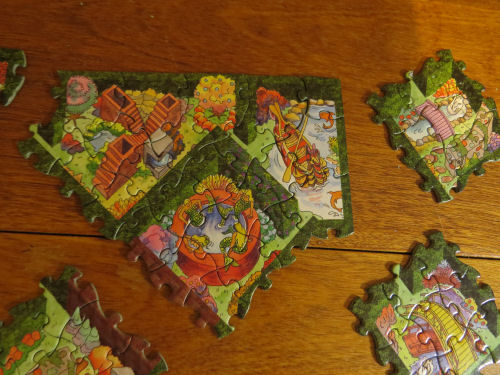 So, eventually, you get all the little squares assembled. If you are lucky, you have them done correctly. I got to the last square and had two pieces that clearly didn't belong in it! Oops. I thought I was in big trouble. But with some careful hunting I found the correct two and switched them from the iffy place I had previously put them. The two I still had went in that square, so at least it wasn't a "round-robin" error.

Now, we have 41 assembled squares and all the edge and corner triangles, but how do you know how to put them together? 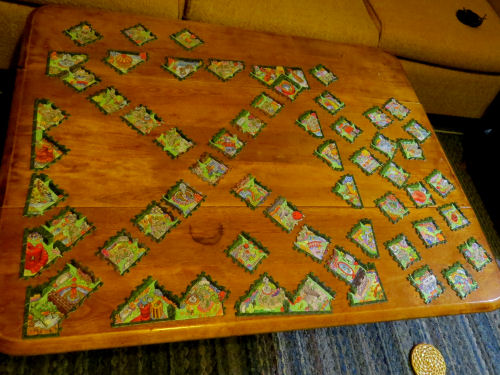 This is where you have to look ahead to the fact that after you get it together, you have to solve a maze. If you look at the closeups above you will see that there are some narrow paths going through breaks in the hedges. These have to match up on adjoining squares. A few of the joinings can by done by the picture-- for example if part of a bridge railing is on one assembled square, and more of the same railing is on a different square. They "give you" the central X by this method, and there were a few more. But after I got those pieces in the right places, there were still 23 squares that could go anywhere. And, some of the edge triangles weren't a given, either. 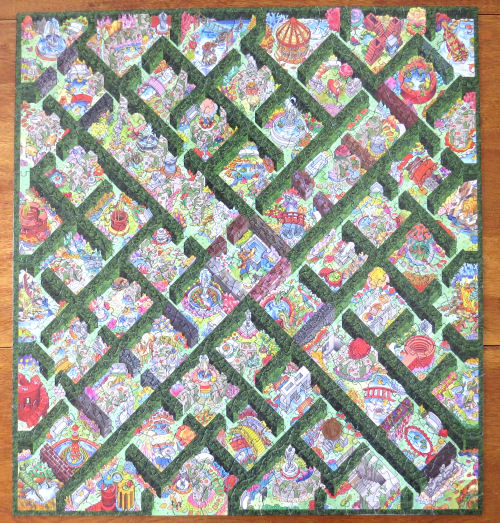 So now you have to use logic. For example one of the edges had two triangles with a break in the hedge and one with none. So the one with none had to attach to the corner section that had none. But then, both of the remaining ones would connect properly to the other corner. Yikes! So you have to go one more step ahead and see if you can make connections. You work until something doesn't connect, and then you have to go back and try the other choice. Fortunately, one quadrant had fewer choices, so once I got that one done, then that eliminated some of the choices for the others.

Anyway, this puzzle took me about a week to do. Not working every minute, of course.

Once it's together, it's a maze. You start at the middle, and you can travel only through the breaks in the hedges and walls. You have to get out to the open edge where there is no hedge. Here's the solution- the yellow line. 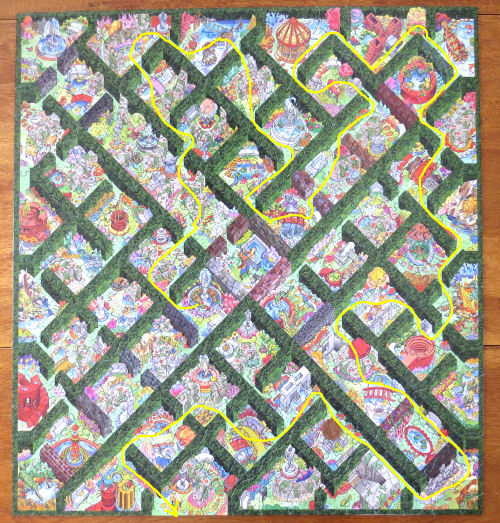 In other news: I spent the day getting my 2020 entries for the Michigan Outdoor Writer's Association contest ready. I thought I'd get that done this morning. Nope. Took ALL DAY. I am seriously underestimating how long these jobs are taking lately. Anyway, it's almost done. Waiting for the answer to a question, and have to physically mail one entry on Monday. Then I can move on to the next odious February task... tax prep.

That's a puzzle to beat all puzzles.

Ann- certainly the hardest one I've done in quite a while!