Even though I sent back the digital magnifiers that were supposed to take pictures but didn't work, we can still do seeds from time to time. Here is an unpopular plant- Common cocklebur, also called clotbur. I took some pictures of leaves in the summer, but can I find them? No. So, you'll probably see this plant again when I do.

The fruits are even more tenacious than burdock. Not only do they have little barbed prickers, but they aren't soft like burdock. These kind of hurt when you try to pick one up. One easy winter distinction from burdock is that these seed pods are oval (burdock is round). 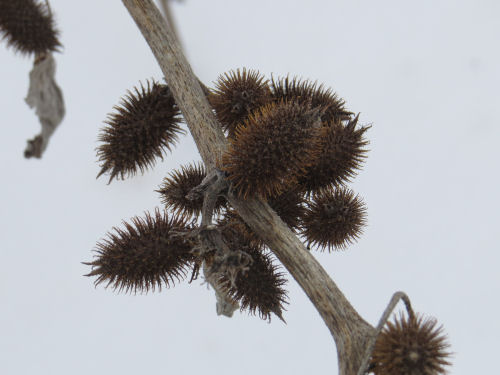 While there used to be up to about 15 species of Xanthium recognized in North America, it's pretty much been reduced to about three, with the differences considered regional variation of the same plant, Xanthium strumarium. It may be nasty, but it is native. 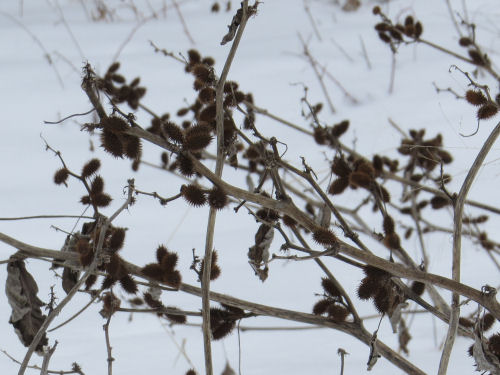 They grow in waste places, roadsides, and edges of fields. 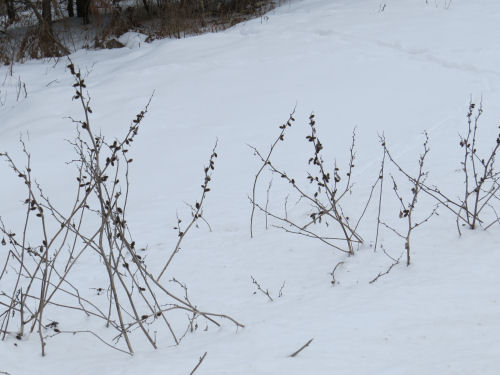 Here's a closer view of the fruits/seed pods. You can see those velcro-like hooks. The two little projections from the top of the pod are called the beaks. They sort of make it look like some prickly insect. The two skinny ones are halves of the first one I cut open, and I also accidentally cut the seed (lower right) in two. 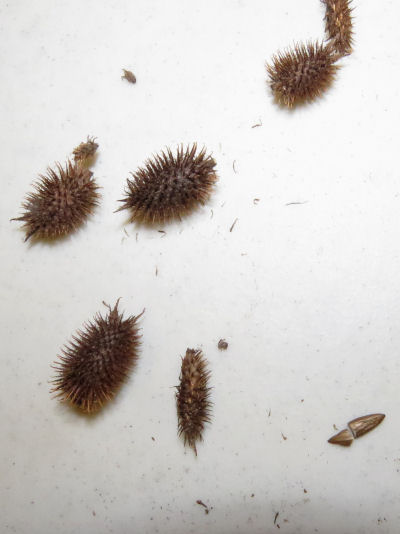 This is only the seed case. The seed- that smooth pointed oval that looks a little like a sunflower seed kernel- is actually inside. The cases are surprisingly tough. I had a hard time cutting one open to get the seeds out. There are two seeds lying longitudinally in each fruit. 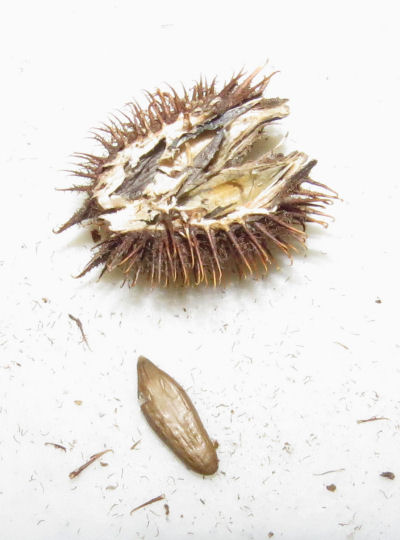 Supposedly, eating the plants has been known to kill people and animals. However, also supposedly, some Native Americans used the seeds for medicinal and hallucinogeic purposes. I was very surprised, after cutting a couple of the pods open and handling it, to discover it has an odor rather like sage. One place said the seeds could be ground with corn meal to make a flour. I'm here to tell you that unless someone found a better way to open those pods, that would be a ton of work. I had to use an exacto knife and something to hold the bur, and press really hard.

In other news: There's not much. I worked on a couple of projects and did a little cleaning. Took a short walk. Ho hum.

Email ThisBlogThis!Share to TwitterShare to FacebookShare to Pinterest
Labels: learn something new, seeds

Interesting that it's been known to kill but also used been used for medicinal purposes.

Ann- I know! I think maybe the leaves and stems are more the problem than the seeds alone.

Lulu: "Oh boy! I can just imagine those things sticking in my lovely furs!"