On the left is Dismal Desmond. This is a toy from my mother's childhood. In fact, I've found out that this toy was made by the Dean's Rag Book Company, and was introduced in 1926 (my mom would have been 7, so that seems about right). It's made of velveteen, and the features and spots are printed on. The toy was so successful that other poses came out in following years. The dog became the mascot of the England Cricket Team and the womens' Wimbledon team. He may have originally had a pink tongue that hung out. This one has been loved and played with. There are several tears that were mended, so it's quite possible it did have a tongue that was torn off. Even so, original ones are pretty rare.

I just learned that the character was re-introduced in the 1990s, but the modern ones I found pictures of don't seem to me to have much charm. 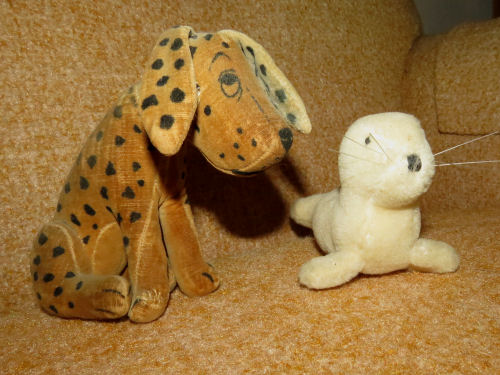 The animal on the right is a little white seal. His name is Winky. While I doubt that Dismal Desmond was Mom's first stuffed animal, I'm pretty sure that Winky was her last.

Mom had advanced Parkinson's, but was managing to live at home by having caregivers that stayed with her. She was in New York state, and I was in Michigan, so I wasn't much help. But in the winter of 1991-92, she fell and broke her hip. That was the beginning of the end, but that's getting way ahead of this story.

I went to NY to visit her in the hospital. That whole scenario is a bit of a medical horror story, and this blog is not about the negatives of my life. I will just say that they finally got her back on the correct meds, and we were able to have some good visits over the time period I stayed (maybe a week?- I was working a real job- I couldn't have been away too long.) She confirmed that she did not want me to bring her to Michigan.

When I was getting ready to leave, I went down to the hospital gift shop to try to find something I could afford that she would be able to keep and remember that I cared. I found this little seal. When I took him upstairs, Mom named him Winky.

Here's another view, so you can see their tails. 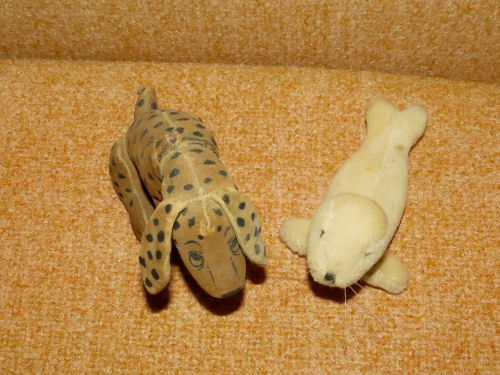 So, Mom never went home again. She was unable to pass the rehab qualifications in 30 days time because of the issues with the Parkinson's as much as the hip. We chose a nursing home, and she quickly declined. She died three years later. Winky often got shoved into her drawer by staff, but at least he didn't get lost.

Just for the record, I told you my collection was small. I've already shown you half. 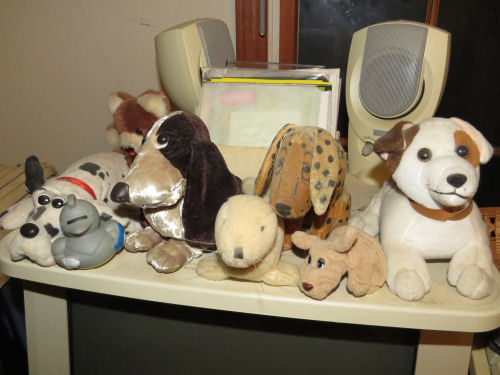 Perhaps you are enjoying the stuffies tour. If not... there's bound to be something different soon!

In other news: As I said, I spent the day working on an editing project with short breaks to add pieces to my current jigsaw puzzle. But my brain is fried. I think I'll be relaxing after this.

What cute little treasures these are. In the last picture the dog on the far left reminds me of one I had.

I have enjoyed the stuffies tour because I recently dug a few of my own out of the attic. I have "Lamby", "Tiger", "Purple Cow", and "Mush Mouse"...oh! And "Chickie"...all from my childhood. Okay, so the names aren't very creative, but they are very well loved.

I'm glad your mom had Winky to keep her company during her last years.

I'm quite enjoying your stuffies tour! All I have is a Teddy Bear.