I've been thinking for a long time that I should blog about these two little toys. Today's the day. It was inspired by a hiking friend, Richard Morgan, who framed some of his Buckeye Trail patches with a little green Gumby that he found beside the road on the first day he ever hiked on the Buckeye Trail.

These aren't getting framed (they aren't flat), but they hold their places of honor in my very small collection of stuffed animals. Here are their stories. Baraga is the little plush dog on the left. 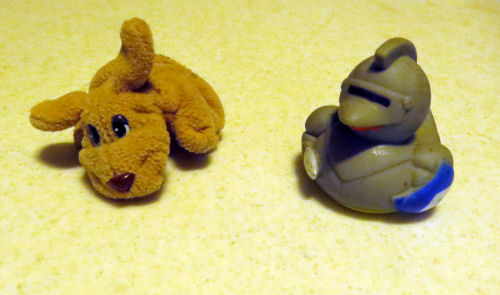 Marie and I found him beside the road in Michigan's Upper Peninsula, in Baraga County (Say BEAR-uh-guh), west of Marquette. It was named for the Catholic Bishop, Frederic Baraga. His story is fascinating! He was Slovanian, and came to the United States in 1830. He had grown up during the time of the Napoleanic Wars, which led to instability in his official education. This actually served him well. He spoke German, Slovenian and French by the time he was nine. Latin and Greek were required subjects, so he was a budding linguist at age 16.

Once in the US, he learned the Ottawa language, and ended up at L'Arbre Croche (Cross Village), Michigan. He then moved to Wisconsin to work with the Ojibway, and then founded a mission at L'Anse, just west of Marquette, Michigan. He was known as "The Snowshoe Priest," because he walked hundreds of miles in the winter to serve his mission outposts. He created a dictionary and grammar of the Ojibway language, and fought constantly for the rights of the Native peoples. He was well-enough known that Matthew Brady photographed him some time in the 1850s.

In 2012, he was declared a saint. I've read his journals, and although like most things that were written before 1850, they are tedious, but they were quite interesting. This statue of him, and a small museum are located at L'Anse. 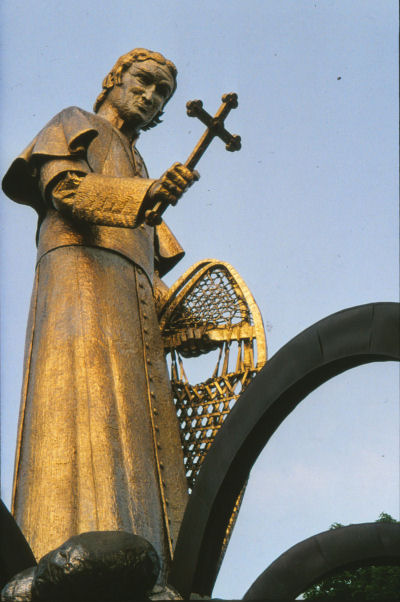 The little rubber duck on the right is puzzling. It's definitely a duck. It's definitely wearing a helmet with a visor like some ducky knight, and carrying a sword and shield. Maybe it is some fantasy or game character that I don't know. I'm sure there are many! Anyway, Marie and I found him alongside the road in northeast Ohio. His name is Berea.

We found him on a day that we passed some interpretive signs for Berea sandstone, and a lot, lot, lot of sandstone buildings, foundations, steps, etc.

Berea sandstone was named for the town of Berea, Ohio, where tons of it were historically quarried. It's a fine-grained pinkish-gray sandstone. The sand that formed it actually came from far north, in Canada, and was carried down an ancient river to Ohio. It was laid down about 400 million years ago. I was not there to verify this. I just read Wikipedia.

Anyway, that's the duck's name, and you can follow the link below to see some cliffs of Berea Sandstone. The pictures are from the day we found him.

Perhaps on some other slow news day, you'll see others of my little stuffed animals. They sit on top of my desktop computer, which needs to go away because it is too old, but it still runs one game I like, so I haven't worked too hard at getting rid of it.

In other news: I worked on an editing project and chilled.

Lulu: "Our Dada says he was going to say the duck looked like a Cylon from the original 'Battlestar Galactica', until he got to the part where it was carrying a sword. Now he's not sure what it is ..."

Interesting stories for both of those little toys. I couldn't tell that second one was a duck but now that I look at it again, I can see it

Lulu- tell your Dada I've learned that it's a novelty toy made by a company called Ducks Only. You can get just about any kind of rubber ducky you want!

Ann- Yeah, I should have showed another view that made it more clear.