Closer In and Farther Out I have been home for almost a week, and I'm trying to get my head around real life again. Today I'll just share some of the biggest impressions of the section we backpacked.

The Superior Hiking Trail is one of superlatives. It is named for its close association with the shore of Lake Superior. It was great to be back in the woods, with our small tent nestled between the trees rather than in a large public campground. Even in the busy summer season we only had to share a campsite with anyone on two of our six nights on the trail. 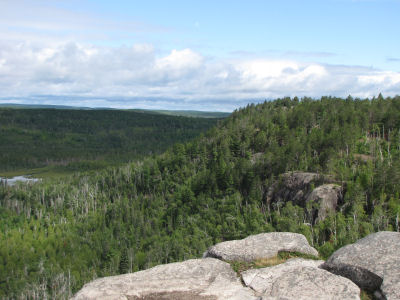 The SHT makes a "point" of climbing to nearly every rocky vantage point that can be found. Even though we were generally walking southwest, unless we studied the topo map or read the guide it was always a surprise whether we would have a view of valleys, distant rivers, lakes and hills, or whether we would be looking at Lake Superior. This depended on which side of the hill we had climbed, of course. Sometimes we looked it up beforehand, and sometimes we just let ourselves be surprised. 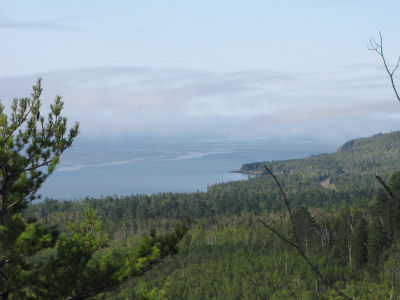 This last one was a lot of fun. We knew that we were supposed to climb Sawmill Dome this day, and in the morning we thought that this round hump must be the "dome." Sure enough, a couple of hours later we were standing on top of this round hump with its rocky sides! 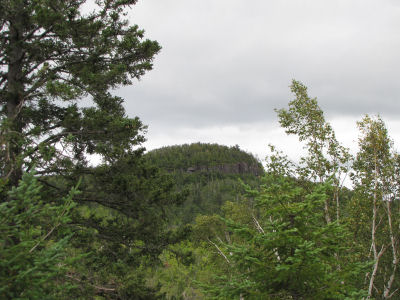 So I've now got 3947 miles of the NCT done! With 104 miles coming up in Ohio at the end of September I should be over 4000 before the end of the year. However, I came home with at least tendinitis, and maybe even a stress fracture in my left leg. So.... I'm doing a lot of resting, icing, and ibuprofen. I hate taking meds, but I HAVE to have this leg ready to hike and bike in four weeks. When I got home I couldn't even do two revolutions of the pedals on the exercise bike. Today I did two minutes without severe pain. I really hate being good, but I MUST so that I can make my goal.

With my short little suburban hikes, I have trouble even imagining what kind of stress something like this can put on a person. Including what you show here, you must have seen some beautiful places though. I hope your recovery goes well.

You are something, Sharky! I'm so impressed with what you have done and what is ahead of you. Take care of yourself so that you can complete the challenge. Go, Sharkbytes!!

Ratty- My leg is not perfect, but it is much better. I'm trying to remember to ice and take the pills. This getting older stuff is for the birds!

Ivy- Thanks so much. I think all will be well.

Lin- Your encouragement means a lot! I'll pet every frog I see for you!

Congratulation on finishing this hike! I can feel the pain in my body already just reading your journey. What an accomplishment!