The Fog is Lifting 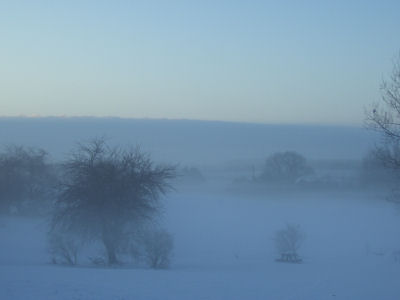 I was home from the paper route long before I took this picture (with my old point & shoot that I charged up). Couldn't really tell what it would look like till I put it on the computer, but I like how the trees just seem to float. I didn't touch up a thing!

Now, I don't know if EVERY cloud has a silver lining, but this one did- 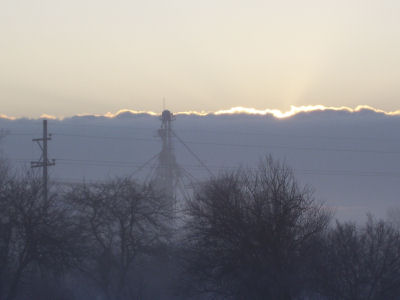 And I seem to have two very nice pieces of news. Om got cleared for takeoff, er... driving! I tried to sound concerned when I patted him on the shoulder and told him that I hope that he doesn't overdo it taking over the paper route again. But I didn't pull it off very well. I'm simply delighted to give that job back to him!

And the other good news is that after several phone calls and authorization to return my good camera for repair, it may be as simple as a bad battery. I did switch them out right away, but apparently the ones that I thought were charged might not have been. Anyway... right now the camera is working, and it's still under manufacturer's warranty for another 6 weeks, so I have some time to be sure that it's ok. I got suspicious when I got a different error message from the one I was getting yesterday.

Email ThisBlogThis!Share to TwitterShare to FacebookShare to Pinterest
Labels: moods of my backyard, personal, sunset and sunrise, winter

I love your pictures, just beautiful. I don't have any winter scenes like this now that I have retired to the Philippines but enjoy looking at photos such as yours to remind me what it is like back home.

Lovely snow photos, Shark...we're having rain here instead and I spent an hour at the ocean today taking pictures of the great, foamy waves - I just hope some idiots don't get out there and try to surf like always happens and end up getting themselves killed!

Glad Om is recovered enough to do his paper route. Smiling here!!

Those are some really great shots! I have seen the separation between different air temps(?) before, and it has always amazed me.

Fog can be so beautiful like in the first picture and yet it can be hazardous for people who need to drive on the road.

Excellent pictures this time. That fog traveled over to this side of the state too, but I never got the chance to capture it with my camera. I'm glad your camera appears to be fine.

You have beautiful fogs coupled with the good news on the camera.

Such a wonderful day.

Love those pictures. The first one is like an image out of a fairy tale -- all magical and like that. Silver linings are nice.

My Canon S1-IS went on the fritz just three weeks before the extended warranty expired. The had to replace the optics. While we were waiting we bought a Panasonic DMC-TZ5 for Sylvia with higher resolution, 10x optical zoom, Leica lens and lots of improved features. It cost less than the Canon.

Love your pictures. That second one is just awesome. Great news on the camera and about Om

David- Retired to the Philippines-That's a long way to go. Didn't realize you came from the snowy midwest.

Hi Carmen- sometimes the big lake seems like an ocean, but at this time of year, not like "your" ocean!

Hi Fishhawk- Since we live on a hill sometimes the layers of fog out back are very interesting.

BK- Yeah!, I had just finished about 90 miles of that driving in the fog.

Hi Ratty- sounds like you have to go to work in the mornings... that tends to eliminate nature pics, eh?

rainfield- nice to see you! The fog really was beautiful when the light started to hit it.

Hi Chuck- I'm not familiar with those camera models, but it sounds like you got a great deal. Way to go!

Hi Mom's- thanks for stopping by.

Ann- Glad you like that silver/golden thread... I just wish that silly grain elevator wasn't there.

Beautiful picture! It looks so soft and dreamy!